Pasha Hawaii, SeaRiver Maritime Inc., and perhaps ConocoPhillips will soon share the practice of paperless navigation in U.S. domestic trades. Each of these three ship owner/operators is managing a transition to paperless navigation at distinctly significant stages. Their progress opens a window into the evolution of electronic navigation, now taking place worldwide. There are other U.S. operators on a similar path, to be sure, but the prominence of these three is exemplary.

Early E-Nav Entries …
The M/V Jean Anne (Pasha Hawaii) and the five-ship Polar Tankers fleet (ConocoPhillips) have been equipped for some time with ECDIS/Planning networks conforming to SOLAS standards for paperless navigation. The M/V Jean Anne has been operated without paperless charts since delivery (2005), and Marjorie C, due to enter trade in 2014 will certainly follow suit. Meanwhile, Polar Tankers is in early stages of discussing the value and/or need for choosing either paper or ECDIS instead of both means, which is their current practice.
In 2014, SeaRiver Maritime will take delivery of two new Aframax tankers fitted with fully integrated bridges including ECDIS/planning networks. These new ships, the S/R Liberty Bay and S/R Eagle Bay, will replace two older tankers, and join two others presently fitted with presently only with a single ECDIS meant to support paper-based navigation. But the newbuilds are creating a change in perspective for an existing SeaRiver ship, the S/R American Progress.
Based on recent internal analyses, SeaRiver management has determined that there is less risk to navigational safety by using one or the other, paper or ENCs, than using both at the same time. SeaRiver management has now decided to transition their updated fleet to paperless navigation. This means the ships to remain in service will be retrofitted with SOLAS-compliant ECDIS/planning networks by 2015. All four ships will be operated without paper.
Separately, Polar Tankers is presently embarking on a similar internal navigation safety risk analysis. The direction that they will take with their fleet is not finalized yet.

Charting the Way Forward
The navigational safety issues being managed by these three companies raise a discussion that is pertinent to domestic maritime operations. For example, physical installations may exceed international requirements despite the absence of domestic implementation of these requirements, and despite the complexities of retrofitting new network technologies and sensor interfaces into older bridges.
Training issues must be identified and addressed prior to a full transition. These require a fleet wide scope. They also point to an apparent incompleteness of prior so-called generic ECDIS training, and invite the prospect of an ECDIS refresher course on a repeating cycle.
Exceeding the current IMO standard, such a course would likely focus on the development and practice of bridge procedures, risk mitigation, comprehensive proficiency in ECDIS-based navigation in solo as well as team modes, and total familiarization with the ECDIS network as installed. Again, this will arise despite the absence of domestic training regulations or guidance. In fact, unofficial projections for implementation of STCW-2010 training requirements may not occur before 2016.

So Many Variables: No Easy Answers
Navigation practices that are presently commonplace with Pasha Hawaii will immediately apply to SOLAS-compliant newbuild deliveries in 2014. But these practices also include the inevitable replacement, and probable loss, of manual paper plotting skills. The replacement skills, in general, amount to visual-electronic correlation skills. These are not yet, or ever likely to be, included in domestic licensing examinations. With regard to safe navigational watchstanding, the relevance of such traditional licensing diverges ever further from needed competence.
On the other hand, paperless navigation leaves little or no opportunity to practice traditional analog backup methods. Without paper charts on board, the only rehearsal can occur on an ECDIS display with manual LOP functionality. This would have limited practicality in daily operations, somewhat akin to radar transfer plotting.
Going paperless depends on ENCs for the areas transited, not only the completeness of coverage, but also with regard to survey quality and currency in critical areas, but also in presentation. Metric conversions can create hesitant understanding on ENCs built from U.S. survey data. Older surveys typically lack sufficient depth contour resolution or density for deep draft ships entering U.S. ports, most of which are estuarine. New York harbor surveys, for example, offer depth contours of 2, 3, 5 and 10 fathoms, which leaves a challenging safe water portrayal on an ENC set up of a draft of 6 fathoms.  NOAA’s Marine Chart Division is presently discussing the addition to critical ENC cells of a 15m curve. But, this would require painstaking review of original survey data. Beyond this, other curves may be more useful, metric or imperial.
Among many other considerations for the replacement ENC portfolio is the operational decision to procure cells through a SENC service linked to the ECDIS Planning unit in the bridge network, complete with licensing pass-through and regular updating, potentially through a satellite link for full automation, or to procure cells through a more manual means. Either way, consistency across a fleet is an important consideration.
Hybrid practices – ECDIS used to support paper navigation – already include the use of Print on Demand (POD) paper charts, where subsequent corrections are applied manually, and routes are drawn in pencil rather than inked and taped over. Given the shorter lifecycle of the POD in service on board, there is little surprise at the sunset of lithograph paper charts next April. The concern with hybrid practices is that neither the paper-based navigation nor the ECDIS-based support is being done thoroughly. There are apparent gaps occurring in both, and the gaps vary across the population of watch officers. Management sees this as raising the probability of a safety-critical incident. This can be controlled by detailed fleet procedures for a single navigational method applied fleet wide. With the investment in integrated bridge systems on their newbuilds, SeaRiver has opted to fit out the other two like the new ones.
This decision could be viewed as tacit recognition that adding ECDIS navigation to traditional paper-based practices is both burdensome to the watch, and does not necessarily add safety in a consistent manor. Although scientific studies on this effect are rare, anecdotally, this is no surprise amongst navigating mariners since the mid 1990’s, especially with the advent of ECS and raster or proprietary vector charts.

Real Life: Actual Practice
Mariners go on watch intending, like most professionals, to carry out their duties correctly. When workloads become unmanageable, equipment is unfamiliar, and procedures unclearly defined (often undefined over the years in the case of ECDIS), then corners are cut. Position plots and DR’s and ‘set & drift’ calculations may be left undone, with the assumption that the ECDIS/ECS has the solutions, leaving decision making deceptively less informed when the digital systems are poorly set up.
To develop and rehearse paperless navigation procedures and skills, SeaRiver management intends to take on ECDIS refresher training in a 5-year cycle. Considering what is in store for the advancement of ENC data transfer standards, as S-101, such refresher training will likely gain a relevance not seen before in the maritime profession. In 5-7 years, the transition will begin from S-57 to S-101. The new ENC format will allow many technical changes directly affecting the usefulness and presentation of chart-related information. Besides making readable external files such as dredged channel survey depths, S-101 will contain the facility to allow continual development of additional applications. What this means to ECDIS manufacturers is the development of an updated version that meets an as-yet unwritten new Performance Standard to adopt S-101. What this means to hydrographic offices (HO) is that existing S-57 data will be provided to the user pre-converted to S-101, so as to be readable in the new ECDIS version. At the same time, HO’s will be facing the prospect of creating new S-101 cells, however incrementally. Refresher ECDIS training will be an understatement.

Regulatory Uncertainty
In 2004, Congress amended the Ports and Waterways Safety Act of 1972 broadly requiring the use of electronic charts in navigable waters of the U.S., allowing for individual vessel exemptions and waivers, and directed the USCG to implement this addition to the law before 2007 (33 U.S.C. 1223(a)). The USCG implemented portions of the PWSA beginning in 1983 as 33CFR160 with amendments as recent as 2011, but without addressing the use of electronic charts.
In the absence of such rulemaking, the USCG, ironically, is able to grant waivers to allow for paperless navigation by SOLAS classed ships sailing domestically under US flag. The rule that would allow this has been in place (33CFR164.55) since 1977 for navigation safety regulations in general, and since 1951 for waivers of navigational compliance (33CFR19.01). Soon there may be some prominent shipping companies who will make use of this. All of it will impact domestic operators – no matter where and on what platform they sail on. 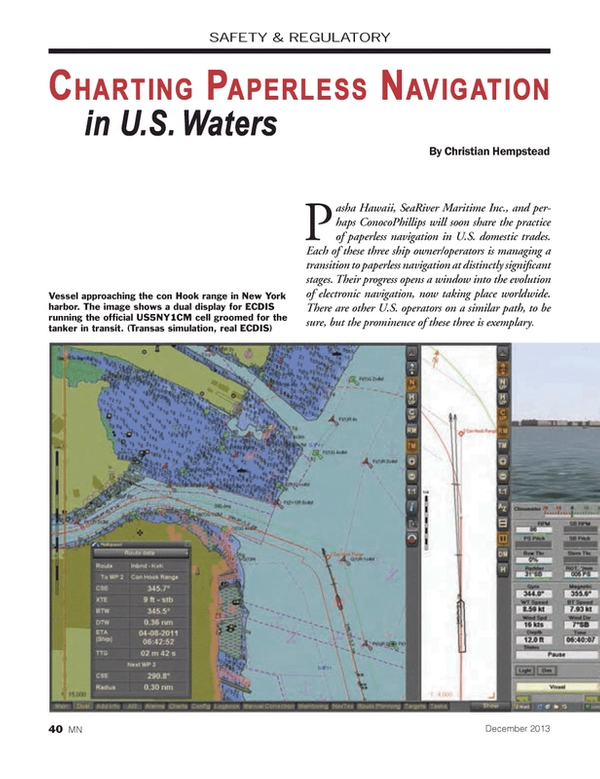