In December 2013, the EPA through its Vessel General Permit (VGP) will introduce the mandatory use of “Environmentally Acceptable Lubricants” or EALs. These products include the lubricating oils that are directly used in applications referred to as “oil to sea interfaces” where the only thing holding the oil from entering the water is a simple seal or gasket. Understanding what this all means to you is important. For starters, the criteria for EALs are as follows:

The US EPA has determined that four major types of lubricants meet all the necessary required criteria to be classified as an “approved EAL” are as follows:

Regulatory Compliance Regarding “Oil” Spills or Discharges to Water:
The US EPA “Clean Water Act of 1990” clearly prohibits the discharge of any oil (mineral or vegetable), accidently or otherwise in any water of the contiguous USA.  The “non-sheening rule”, or 40 CFR 435, which states that any substance that makes a visible sheen on the water is a violation of the “Clean Water Act of 1990” and 40 CFR 435, as that is the basic determination of what is actually discharged “oil.”
In Canada, the “Canada Shipping Act” Pollution Prevention section clearly states that petroleum hydrocarbons (oil) are clearly defined “pollutants” as are “any substance that can have detrimental effects on humans, animals and plant life.” This includes any oil that can interfere with marine wildlife, including a vegetable oil, even if they are non-toxic. In Canada and the US, marine pollution offenses are often met with heavy fines and cleanup costs. The major problem here is that other than PAGs, virtually all US approved EALs are some form of oil so any subsequent spills will usually be met with fines. A look at the performance aspects of US EPA Approved EALs is therefore illuminating:

Vegetable Oils - Natural Triglycerides (HETG):
Can exhibit good lubricity but when temperature is increased they fall short on performance. Have poor thermal and oxidative stability leading to varnish and solid deposits. Short fluid life span. Poor cold weather performance. Poor hydrolytic stability - vegetable oils react quite readily in the presence of moisture and water leading to excessive acid and sludge formation that can damage a system. Can turn rancid and cause terrible odors in a system.

Synthetic Esters (HEES):
Improvement in performance and life than vegetable oils. Still prone to oxidation and varnish at elevated temperatures and pressures. Even synthesized hydrocarbons (inorganic or inorganic based) such as PAOs, as well as synthetic esters have their upper limits for heat tolerance and will oxidize to form varnish over time.
Chemical reaction with moisture and water referred to as “hydrolyzing” still occurs producing acids and gumming/varnish (The maximum amount of water ingression tolerable by most oils, mineral or synthetic is 200 ppm, rendering the products unusable).

Polyalkylene Glycol (PAGs) (HEPG)
PAGs do not sheen the water, are non-toxic and not classified as “oil” by the US Coast Guard and Transport Canada.  PAG fluids are approved by the US EPA as acceptable EALs due to both the rate of biodegradability and low aquatic toxicity.
Superior oxidative stability; PAG hydraulic and gear fluids offer superior oxidation resistance when compared to any other type of synthetic or conventional lubricants.
Lubricating ability; PAGs produce less friction than even other synthetic fluids such as synthetic esters or PAOs. (see figure B)
Not only do PAG fluids resist oxidation adding to a much longer fluid life, they are incapable of forming solid deposits such as varnish or coking. (see figure C)

The Case for PAGs
Beyond these obvious benefits, PAGs demonstrate Superior load carrying ability, Superior thermal stability (withstanding temperatures up to 250 F), Material compatibility, are fire resistant and are not only heavier than water (specific gravity of approximately 1.03), but also dissolve readily when mixed with water. Since these products completely dissolve and dissipate when discharged into water, they do not form an oil slick that can contaminate seabirds, beavers, otters or foul shorelines and contaminate marshes. The slick itself, regardless of the toxicity or biodegradability of the oil in the event of a spill accounts for much of the initial mortality in marine wildlife in the initial stages of the discharge.
One of the reasons the US EPA enacted the ‘Clean Water Act of 1990” and the “Non-sheening regulation 40 CFR 435” was to try to reduce the environmental impact of any type of free oil floating in the surface of the water. If the fluid is neither a hazardous chemical and is not considered oil, it is exempt from this act as well as OPA 90 oil spill cleanup regulations. This will not only reduce or eliminate fines but can dramatically reduce the scope and costs associated with aquatic oil spill cleanup procedures and remediation.
PAGs can be designed and tailored achieve certain characteristics or capabilities in order to perform very specific functions or performance requirements to suit the application (“designed”, not refined).
Finally, PAG fluids are suited to the marine environment. They have very minimal or a negligible reaction to the presence of moisture or water, so corrosive acids and gums are not produced, as they would be with hydrocarbons and especially vegetable oils and vegetable esters. They can accept up to 1.5% water contamination (15,000ppm) before any performance degradation. There is no saturation point as there is with conventional hydrocarbons (maximum saturation point of most mineral oils is 200 ppm), but viscosity and lubricity will slowly be reduced as the water content is increased. PAG fluids also offer excellent corrosion protection if affected by water; after all, water glycol hydraulic fluids used in the steel and smelting industry contain up to 45% water.

Bottom Line
Ship Owners are now all looking at the new EPA VGP regulations which come into effect at the end of this year. They need to realize what they are trying to achieve now and in the long run. Environmental compliance should be at the top or near the top of that list. Next should be cost effectiveness and performance. In the past, many ship and equipment managers avoided using vegetable oils and mineral oils as they are viewed as costly and inferior lubricants that require much more maintenance and bring their own set of problems.
PAGs, on the other hand, reduce or eliminate many of the other issues created by conventional EALs such as shorter fluid life, increased maintenance intervals, and machinery damage. Ship operators have long complained that even when using biodegradable oil, they still got fined fine when they spilled it. To that end, they asked, “What is the point in converting our equipment if we are still going to get fined?” Would it not make sense to avoid using oil-based EAL lubricants in applications such as “oil to sea interfaces” in the first place if there is a viable alternative?  PAGs offer that viable alternative.
The petroleum and lubricant industry often dismiss PAGs because they are not compatible with other conventional oils and are not produced by major refiners. The main reason for this reluctance of acceptance is lack of knowledge of PAG fluids and unfamiliarity of the major differences in both environmental compliance reasons and the performance advantages of these fluids.
PAG fluids such as Dow’s UCON Trident AW, BASF Plurasafe Enbio TC, and American Chemicals Technology’s Neptune (including EP and XP) lubricants are anhydrous, or contain no water, and offer the performance characteristics listed above. PAG fluids have already solved high heat and varnish issues in harsh applications such as compressor and turbine fluids, where even PAO’s were failing due to the severe heat and friction (American Chemical Technologies have now received approval from GE to use PAGs in their turbines).  Ship owners are now realizing that PAGs can offer more than just a solution to the VGP issue but also the benefit PAGs can have to their compressors and other equipment that are subject to harsh operating conditions in marine environments.
PAGs are often said to be very costly but take into account their performance characteristics, their long life, their environmental footprint, etc., and they can be proven to be less expensive to purchase than most any EAL on the market.
If you are worried about having the best performing EAL and worry about your lubricants entering the water or water entering your lubricants, then the use of PAGs might be for you. Summing up: if water–soluble PAG fluids are not the perfect biodegradable lubricant, or EAL, they come as close as anything that has been developed to date ever will. 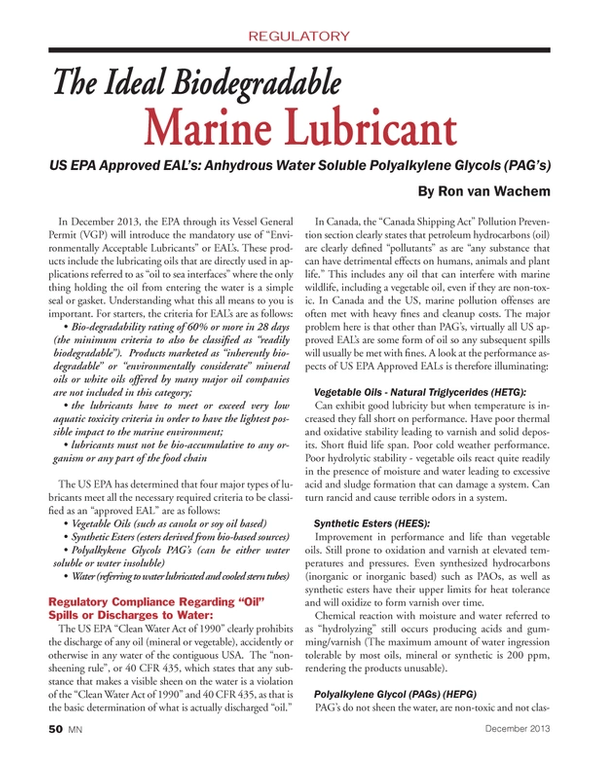