Scott Metzger has been with Clean Harbors Environmental Services for more than 22 years. He is the Senior Vice President, Emergency Services and holds an oversight role for the Clean Harbors National Strike Team that manages environmental incidents. When not deployed on an event, Scott is focused on ER preparedness, readiness, training and the strategic development of response teams. And now, as the President of the Spill Control Association of America (SCAA), he’s got even more on his plate. Couple this with the advent of the U.S. Coast Guard’s recently published Non-Tank Vessel Response rules and it is clear that 2014 looms large as an exceptionally busy year for him. He’s more than up to the task.
Based in Massachusetts, Metzger brings almost a quarter century of response experience to the table in his new role as SCAA’s chief executive. Beyond this, his response CV includes dozens of major events and his industry-specific professional training covers the full gamut of response disciplines, spanning from diving and vessel operations, all the way to HAZMAT and confined space entry safety protocols. Notably, he participated in the response to Hurricanes Katrina and Rita, as well as the M/V Cosco Busan allision response in San Francisco Bay, Calif., just to name a few. Listen in this month as SCAA’s President responds to our queries on all things “Response.”

You are the new President of the Spill Control Association of America (SCAA). Tell us about your membership and their priorities?
The Spill Control Association of America was organized in 1973 to actively promote the interests of all groups within the spill response community. Our organization represents spill response contractors, manufacturers, distributors, consultants, instructors, government & training institutions and corporations working in the industry. There are currently 85 Member Organizations that make up SCAA. Our Guiding Principals include making health, safety and environmental considerations a priority in the planning and implementation of our operations and to provide our customers with quality products and reputable service, while responding safely, effectively, and efficiently, in their time of need. We, as an industry, have a direct impact on the quality of the global environment and we will work to improve that quality. To do this, we collaborate with Government entities, customers and other stakeholders in creating responsible laws, regulations and standards to safeguard the community, workplace and environment.

What’s Job 1 for you as you take the helm at SCAA? Why? And, how do you hope to accomplish that goal?
My number one priority as the president of the SCAA is to represent each and every one of our members and to promote the benefits of our organization to prospective members. The strength of the SCAA is in our members.  The Networking power of the SCAA is incredibly strong and as President, I will continue to foster these partnerships.

The new Non-Tank Vessel Response rules have been published in the Federal Register. Did SCAA have a role in crafting any part of that document? If so, what was it?
SCAA has been asked to comment and advise on the new Non-Tank regulations and have met with the USCG to discuss how the response rules will affect our membership. The Spill Control Association is a member of a Partnership Action Team with the USCG and is often brought in to comment on proposed changes to maritime response regulations.

In your words, describe the importance of the new rules. What’s the bottom line in terms of industry impact – for those operators affected and the service providers who will be called upon to provide service?
The new Non-Tank Vessel Response rules have aided in identifying risk and have helped operators plan for common pollution incidents resulting from groundings and collisions.  Responding organizations, including many of our members, are consequently better prepared to service these clients today under the new rules. Through drills and exercises, they will continue, to be ready for the next call to service.

Does industry have the capacity to step in for all the new hulls now required to establish these relationships with firefighting, salvage, and response providers? Where does SCAA fit into the puzzle?
In a word: Yes. The response industry in the United States is well prepared and has the capacity to cover Non-Tank Vessel operators under the new rules. In fact, many of these clients have been previously covered by or serviced from many of our members.

Do you think your firm will need to increase hiring to meet new demand as a result of the new non-tank rules?
Not at this time.


The non-tank final rule also updates the International Shipboard Oil Pollution Emergency Plan requirements that apply to all nontank vessels and certain tank vessels. What advice would you give non-tank vessel operators today as they move forward in a new regulatory regime?
Continue to work with response industry experts to ensure that you and your designated responder can meet the requirements.

From the responder’s perspective, what’s the most important part of developing an effective team, especially when there can be a lot of down time between actual emergency events?
Many of our members provide a vast range of Non-Response services in addition to Response.  Services ranging from on-board tank cleaning, line handling, booming, marine transfers, waste disposal to name a few. Deployment Drills and Table top exercises are also conducted during down time.

Is there an “ideal” CV for the person who is tasked with attending and/or leading an effective response effort? If so, what is it?
In a word: Experience.

Federal regulations: which emerging rules will affect the spill response community the most?
Without a doubt, the issue of Limited Responder immunity is the single biggest issue that is affecting the response community as a whole and could have a drastic effect on the Nation’s ability to respond to future events. Initial response to all marine events relies heavily on local responders. Time is always of the essence when it comes to being able to quickly and effectively contain and control a spill. Many of the local responders in ports around the nation are small businesses and as such are extremely vulnerable to the potential litigation costs that so often come from that initial response … just because they were on scene lending assistance.  The concern amongst many of our members and the response community as a whole is that without some added protection(s), some of these local responders may choose to take a step back when requested to respond. It’s important to note that no one is saying that responders shouldn’t be held liable for negligent acts, but there has to be limits.

BSEE’s SEM’s rules – this is a hot item right now. How will they affect how your members do business, if at all?
Also known as the Workplace Safety rule, the BSEE SEMS rule brings many of the best practices that the response community already follows into the off-shore environment. The safety rules that SCAA members use today, under OSHA, fit very well into the new SEMS rules and as such the response community is already poised to follow the new SEMS rules. Impact to our members will therefore be minimal.

Summarize the current situation with regard to Responder immunity, what needs to be done, how you are involved and what’s your best case scenario outcome?
The Spill Control Association of America is one member of the Responder Immunity Coalition that was created to focus and align the efforts of the responder community. The Coalition is working with Legal Council in the DC Metro Area to create a resolution to be added to a Bill that will enhance the current responder immunity that was part of the Oil Pollution Act of 1990.  Currently SCAA and other members of the coalition are in discussion with various congressional leaders on both sides of the isle to bring this issue to a vote. Although sometimes slow going, we are certain that the current law will be strengthened and the response community will continue to answer the call when needed.

What changes do you see coming in your line of business? Why?
At the recent Clean Gulf conference, it was clear that many new technologies were emerging in the response community. These include spill tracking and response management tools. From an operational standpoint, some SCAA members may be looking towards expanding in different geographical areas. In particular, this might mean deployment of assets in shallow draft and inland areas, in order to properly address risks posed by increased inland traffic at rail crossings, pipelines and other similar areas.
The increased production of energy in the heartland is a good example of potentially bigger “response” markets. There, the shift in transportation of energy from much larger vessels into smaller, but more numerous vehicles is worth watching. 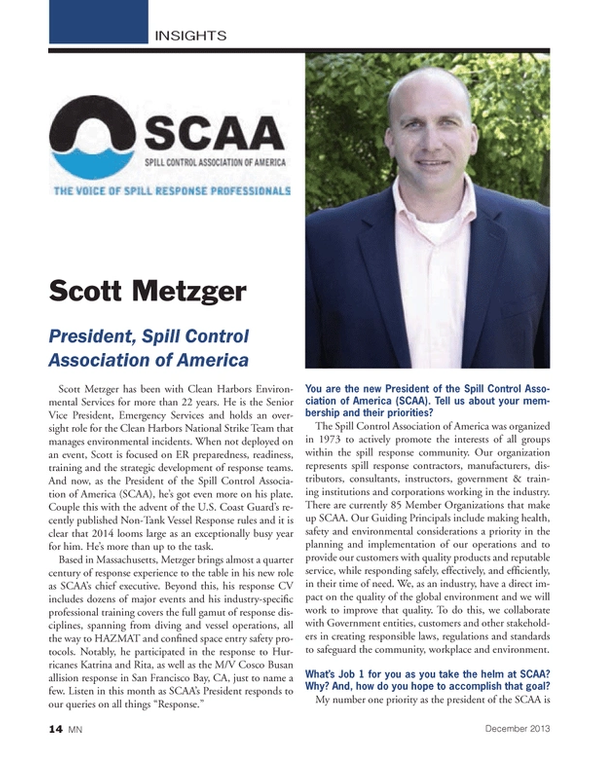