Sustaining the ongoing boatbuilding boom can involve the lawful use of foreign finance streams. James Kearns takes a closer look at the practice.

The citizenship requirements for vessels engaged in the U.S. coastwise trade are generally well-known. Such a vessel needs to be built in the United States; it must have a U.S. citizen crew or operator; and its ownership must meet specified U.S. citizenship requirements, depending on the form of legal entity owning the vessel (corporation, limited liability company, partnership, etc.). With few exceptions, such vessels must have a valid Certificate of Documentation from the National Vessel Documentation Center of the U.S. Coast Guard, with a coastwise endorsement. Vessels meeting these requirements are often referred to as “Jones Act” vessels, since these citizenship requirements are often attributed to the Merchant Marine Act of 1920, which was sponsored by Senator Wesley L. Jones of Washington State, and so became known as the Jones Act.
In fact, the requirements for vessels engaged in the U.S. coastwise trade to be built in the U.S. and to have U.S. citizen owners and crews can be traced back throughout our country’s history, in one form or another, to statutes that were passed by the very first U.S. Congress in 1789. In recent years, adjustments have been in the U.S. maritime statutes that continue to protect these fundamental principles, while providing expanded opportunities to tap into foreign sources of capital to finance the construction of new vessels to the Jones Act fleet.

Fine Tuning
The first significant adjustment came in 1996. Prior to that time, a lender who provided loan financing for the construction or purchase of U.S. flag vessel could not secure its loan with a mortgage on the vessel unless the lender was itself a U.S. citizen. However, this limitation began to restrict the availability of loan financing to the builders and owners of Jones Act vessels in two ways. First, there were foreign banks and financial institutions that were willing to provide loan financing for the construction and purchase of Jones Act vessels, but they were unwilling to do so without the protection of a ship mortgage. Second, there was an increasing interest on the part of overseas financial institutions to acquire U.S. lenders. The First National Bank of Maryland, for example, was acquired by Allied Irish Banks in 1997.
To remove this barrier, in 1996 Congress amended the law to permit foreign lenders to secure their loans with preferred ship mortgages. This does not mean that a foreign mortgagee can now become the owner of a Jones Act vessel by foreclosing on its mortgage. The protection for the mortgagee is that, if a foreclosure becomes necessary, the mortgagee will receive the proceeds from a foreclosure sale to the extent of its outstanding loan. Most financial institutions would prefer to receive the cash than to take title to the vessel in any event.
While this increased flexibility helped to facilitate loan financing, it did not address a similar need for another popular financing structure, namely, lease financing. The effective use of lease financing for U.S. flag vessels has been ongoing for more than 35 years. This financing structure has been particularly useful when the source of the underlying credit for the financing has not been a U.S. citizen. For example, Shell Oil Company does not meet U.S. citizenship requirements because of the percentage of its stock that is owned by Royal Dutch Shell. Yet, through lease financing, Shell was able to provide the credit that supported the construction in the United States in the late 1970’s of four U.S. flag oil tankers, two of which were used in the U.S. coastwise trade carrying crude oil from Alaska to California.
This was made possible by having a U.S. citizen leasing company own the vessels, a U.S. citizen operator as the bareboat charterer of the vessels, and Shell as the time charterer of the vessels. Under the regulations of the U.S. Maritime Administration, general approval has been given for, among things, time charters to non U.S. citizens. The time charter required Shell to pay charter hire to the bareboat charterer that included the amounts necessary to service the lease financing, and this component of the charter hire was then assigned by the bareboat charterer to the leasing company. This structure protected all of the fundamental interests long embodied in U.S. law. The vessels were constructed in the U.S., thereby creating U.S. jobs and helping to maintain the shipbuilding capacity necessary for U.S. national security. The vessels were bareboat chartered to a U.S. citizen operator, thereby providing still more U.S. jobs and meeting the national security interest of keeping the vessels in the physical custody and control of U.S. citizens.
Because the financial institutions that offer loan financing for the construction and purchase of vessels also frequently offer lease financing, the same kind of flexibility that was made available for non-citizen lenders was proposed for non-citizen leasing companies. For reasons similar to those leading to the allowance of non-citizen mortgagees, in 1996 and again in 2004, Congress amended the vessel documentation laws to permit a vessel that is documented with a coastwise endorsement to be owned by an entity that does not qualify as a coastwise citizen, so long as several additional conditions are met. This special arrangement is often referred to as the “leasing company exception.”

Additional Conditions
The additional conditions are necessary because, in the lease financing of a vessel, the leasing company actually takes title to the vessel. The additional conditions are designed to prevent the leasing company exception from being exploited by foreign companies that are in the business of operating vessels outside the U.S. to enter the U.S. coastwise trade. The additional conditions that must be met to qualify for the leasing company exception are as follows:
First, the vessel must be eligible for documentation with a coastwise endorsement. In most cases, this will mean simply that the vessel has been built in the United States.
Second, the entity owning the vessel must be a “documentation” citizen, in contrast to being a “coastwise” citizen. In the case of a corporation, to be a “documentation” citizen imposes citizenship requirements at the management level of the corporation, but not on it shareholders. In particular, this means that:

Third, the entity owning the vessel must certify, when initially applying for documentation and annually thereafter, that the owning entity:

Fourth, the vessel must be placed under a demise charter having a period of at least three years and which gives the demise charterer full possession, command and control of the vessel. The demise charter must be submitted in advance to the National Vessel Documentation Center for review and approval as a bona fide demise charter.
Fifth, the demise charterer must certify that it is a U.S. citizen eligible to engage in the U.S. coastwise trade, i.e., that it is a “coastwise” citizen. A “coastwise” citizen must meet all of the requirements of a “documentation” citizen enumerated above plus additional requirements regarding its equity ownership. In the case of a corporation, at least 75 percent of the stock interest in the corporation must be owned by U.S. citizens. If any stock in the corporation is held by another entity, rather than by an individual, then that entity itself must meet the requirements for a “coastwise” citizen, and so on up the chain. When determining the percentage of equity interest in an entity that is owned by U.S. citizens, legal title alone is not dispositive. The law provides that an otherwise qualifying entity may fail to meet equity interest requirements because, for example, the equity is subject to trust or fiduciary obligations in favor of non-citizens; or non-citizens exercise, directly or indirectly, controlling voting power; or non-citizens, by any means, exercise control over the entity. The applicable equity interest requirement is not met if the amount of equity subject to obligations in favor of non-citizens, non-citizen voting power, or non-citizen control exceeds the percentage of the non-citizen interest that is permitted.

Foreign Financing 101: It’s not Rocket Science
Although the requirements to qualify for the leasing company exception might at first appear to be complex and to offer only a narrow opportunity, they are not in fact difficult to meet when a proposed transaction complies with the spirit of what was intended to be achieved. The author has been involved in several transactions in which the leasing company exception has in fact made financing available from foreign sources for the construction of vessels in U.S. shipyards that have been placed under demise charters with U.S. citizen operators for operation in the coastwise trade. One interesting development has been that some financial institutions that would in fact qualify as coastwise citizen owners have nonetheless opted to structure a vessel lease financing under the leasing company exception. They have done this either to preserve the option of later transferring their ownership interest to a non-citizen financial institution, or to avoid complications if they themselves later become the target of an acquisition by another financial institution that is not a coastwise citizen.
Finally, note that a single transaction can take advantage of all of these approaches—mortgagee flexibility, the leasing company exception, and credit support through a time charter—to obtain financing from foreign sources for the construction in U.S. shipyards, and the operation by U.S. citizens, of Jones Act vessels serving the coastwise trade of the United States. 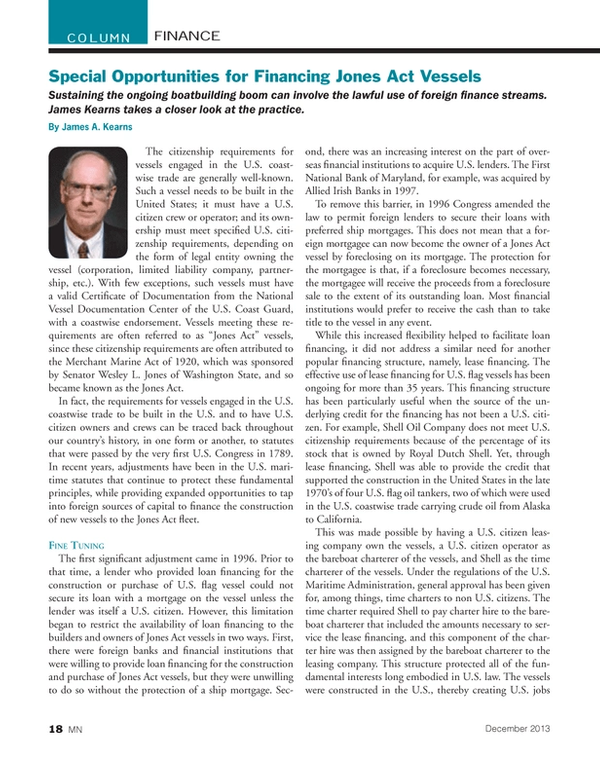