The Maersk Group launched a computer game and teaching materials, available for free, to help teach students about oil exploration and oil production for Danish secondary schools, technical colleges and higher preparatory examination courses. The oil exploration game, which provides an insight into the global oil industry and the various elements of oil exploration, drilling and production through the oil fields in the North Sea and Qatar, has already had more than 340,000 players via www.QuestforOil.com.
Quest for Oil combines knowledge of geography, physics and earth science, which has attracted the attention of teachers. The Maersk Group launched an educational package targeted at students and teachers in these particular subjects. Several Danish secondary schools have already signed up for the package.
“We have experienced great interest in the Quest for Oil game, and on the request of several high schools we are now launching an educational package. We are pleased that a significant number of students and teachers find oil exploration and oil production interesting, and the educational package will contribute to sharpening student’s understanding in this field of education,” said Birgitte Henrichsen, Head of Group Communication and Branding, the Maersk Group.
The educational package has been developed in close collaboration with teachers from secondary schools in Denmark, who have also participated in ongoing testing of the materials. These include, besides the game itself, a booklet, a teacher’s guide as well as a student’s guide and assignments. The package can be used in a 90-minute lesson or form part of a project day.
The materials can be downloaded via www.QuestforOil.com and used immediately. The app can be downloaded from the App Store in May 2014.
The Maersk Group has also experienced international interest in Quest for Oil. In summer 2014, an edition targeted at American high schools will be launched and further versioning of the educational package have already been planned.
The Quest for Oilsite was launched June 2013, and to date more than 340,000 unique users have visited the site, more than 182,000 game sessions have been initiated and each gamer spends about 31 minutes per game. The game was produced by FRND, Quartz+Co og Serious Games Interactive. 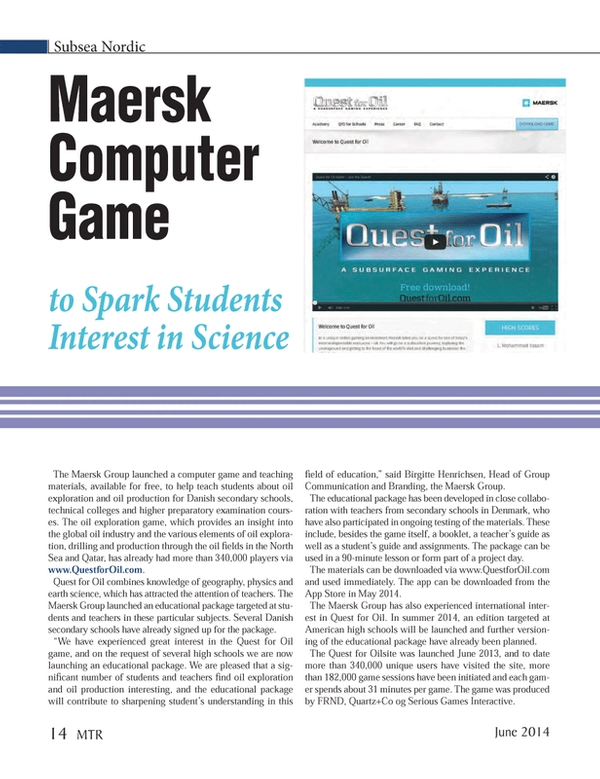