In 2010, Blake Sanchez saw a billboard that changed his life. “Four years ago, I saw a billboard for Texas A&M at Galveston,” Sanchez said. “It was advertising marine programs, and the ocean engineering one caught my eye. I decided to look into it, because the campus is located on the coast only a few miles from the oil and gas capital of the world.” After seeing the billboard, he took a chance, applied to Texas A&M at Galveston and never looked back.
In a 2013 article, the Houston Chronicle reported that ocean engineering was ranked number five in the top five most profitable bachelor’s degrees in Texas based on annual salaries for graduates from 2011. For more than 40 years, the Galveston campus of Texas A&M has been preparing generations of students for ocean and coastal engineering careers. With degrees in offshore and coastal systems engineering, graduates design marine structures for ocean environments and oversee coastal process projects. As offshore engineers, they produce and maintain hardware for offshore oil platforms, breakwaters, sea walls and bulkheads. As coastal engineers, they direct beach nourishment and shore protection projects.
Sanchez claims he wants to be a well-traveled and seasoned professional engineer one day. “I want to get involved with subsea hardware,” Sanchez said. “Seafloor technology is rapidly becoming complex, and I want to be part of the deep water curve. My goal is to always stay relevant and never stagnate; this field is perfect for my pursuits.”
In May 2014, as he stepped across the commencement stage to receive his degree, he was on the way to realizing his dream. Sanchez has already had a job offer from Aker Solutions, a subsea engineering company and a query from McDermott International engineering firm.
Ken Bailey, the university’s career counselor said prospects for graduates like Sanchez are good. “In the 12 years I’ve been associated with the university, there’s always been a demand for our engineering graduates,” he said. “The offshore and coastal sectors are hungry for engineers, and they pay well.
“Our graduates have been employed by Chevron, Keiwit Offshore, Heerema, Hercules Offshore, Wood Group, Technip and Oceaneering to name a few,” Bailey said. “In 2013, 92%  of our graduates with this degree had jobs, or were accepted into graduate programs before they graduated and the last graduate was hired shortly afterward by Keiwit Offshore. According to Bailey, as of Spring 2013, the entry-level offshore coastal engineering salary ranged from $70,000 to $90,000 per year.
Beyond salary, Sanchez is proud of the benefits of his degree. “The biggest value for my career is the name and backing of Texas A&M,” he said. “People know the good reputation of the university. With this degree, you can literally work anywhere in the world. I want to be based in Houston, but I’d love to go to Singapore, Dubai, Australia or wherever the work is.”
Sanchez says he worked hard to get to this point and along the way, the greatest lesson he learned started with a frustrating challenge. “When I was a sophomore, I got kicked in the face here,” he said. “Statics was daunting and overwhelming at first, but midway through the class, everything snapped into place. When I got the A, I realized I can do this. That carried through my entire collegiate career, and I know it’s going to carry through my entire professional career. Now, I can better solve any problem in life, whether it’s a technical or personal situation. My professor, Dr. Sweetman, challenged me to do my best.

Educating Engineers
Dr. Bert Sweetman, head of the Galveston engineering department, is not just in the business of educating engineers. “We’re expanding brains, and teaching students to think as engineers. At present, our entire faculty has industry experience that provides students with real-world skills to obtain a professional stable job for the rest of their lives — a job that may afford them a degree of wealth.”
Sweetman said the university’s offshore and coastal systems engineering curriculum is cutting edge to comply with latest industry standards. “The oil industry is exciting, progressive and high tech,” Sweetman said. “Both offshore and coastal engineering are about waves and wind; physics and economics. In most other programs ocean engineering is a graduate degree. We are unique in that we offer a master’s level education for a bachelor’s degree related to the ocean.
Sweetman said the only durable assets of any academic institution are its faculty and good reputation. “We have both in our joint teaching/research model,” he said. “Students receive world-class teaching on our Galveston campus and benefit from engineering research. My doctoral students are getting degrees at Texas A&M in College Station and our professors have joint appointments on both campuses. Our campuses complement each other.”
When Sean Musick graduated from Texas A&M Galveston in 2007, he also had great potential for successful career. “I chose the right place for my career plans,” he said. “It had resources of a major university and class size of a small campus.”
Musick started his career as part of structural engineering evaluation team. His work took him to Trinidad and Tobago; Nigeria and the United Kingdom. “The job was well worth my time, and I have learned a lot” he said. “I started out in equal range with my peers, but learned I was better suited for the job than engineers who came out of other programs. All I had to do was understand the scope of the project, whereas counterparts from other schools had to be trained on basic terminology in understanding offshore oil and gas structures and principles.
Today as corporate quality manager for Wood Group Mustang Engineering, Musick says the perseverance taught him was a key factor, “You can make a great career and honest living in engineering. Aggies persevere. We’re willing to go the extra mile.”
Musick’s boss, Don Leinweber vice president of corporate services, agrees that Aggies go the extra mile. “Mustang endeavors to be a client’s first choice for engineering, procurement and construction services related to onshore, offshore, pipeline, automation and process plants worldwide,” Leinweber said.
“We look for people who are self-motivated and not afraid to work. Our recruiters have found that many Aggie graduates from Galveston are better prepared than those from other programs. We get more leadership DNA and service-oriented professionals in these Aggies we hire. We hear so much positive feedback about recruiting Galveston students like Sean. A&M just does it right.” 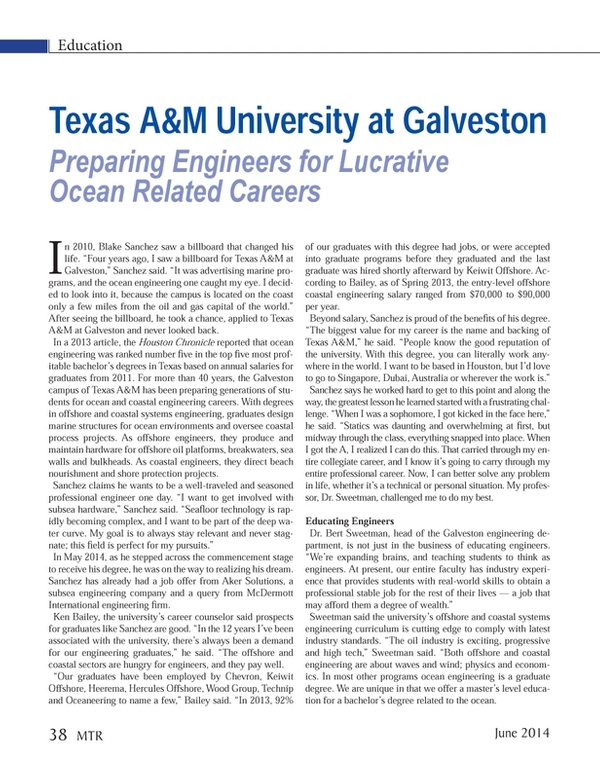