The Model AST 4530 Liquid Level Transmitter from American Sensor Technologies, Inc. (AST) is designed to measure the level of harsh liquids such as slurries, salt water and oil in vented tanks or containers. Constructed with PVDF material and a PTFE diaphragm, the AST 4530 submersible pressure sensor features a submersible PVDF cable, cord grip and housing as well as a conduit connection for turbulent installations such as process plants, salt water holding tanks, on board ships, turbulent tanks and rail cars. Sensors are certified to Class I Div 1, Groups C and D for use in intrinsically safe areas with an approved barrier.
The PVDF liquid level transmitter is not affected from lid angle or proximity to tank wells, AST said. In comparison to ultrasonic and radar sensor technologies, the AST4530 Liquid Level Transmitter will not have an offset in output due to foaming, reflectivity as well as lid angle or proximity to the tank wall. In plastic tanks, a metal plate is not required to be installed under the transmitter. Vapor and condensation will not affect the reading or survivability, as the transmitter is vented through the cable to the outside of the tank or container. For marine and water processing applications, it offers the advantage of not requiring sacrificial anode to reduce corrosion over time. It will also survive longer than standard submersible transmitters in applications where bacteria can attack metal.
www.astsensors.com 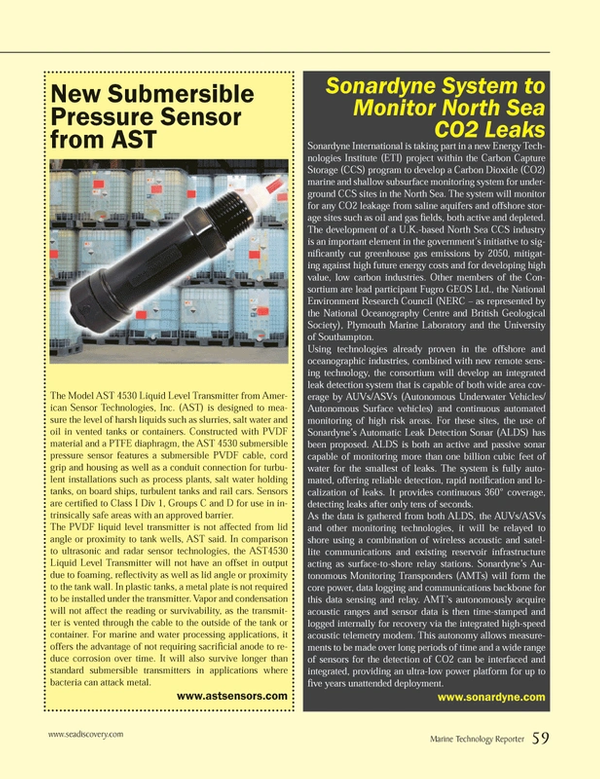