ONR and the Culture of Innovation and Invention


What are your near term, mid-term and long term science and technology (S&T) objectives?

It’s critical that our Sailors and Marines never go into a conflict as a fair fight.  Whether it’s a near-term threat we’re trying to address, or a long-term leap-ahead technology, we need to make sure that we’re investing in cutting edge technologies that are going to give our Sailors or Marines that decisive technological advantage.  Across everything we do, we have to stay under that big umbrella called “affordability.”  It’s no longer good enough to develop an incredibly impressive capability.  It’s got to be affordable.  Our vision is to deliver hugely effective capability with affordability.
You can look at our strategic plan and see all of the areas we’re focusing on, but there are a few that are most important to us.  First is the undersea domain, including manned and unmanned vehicles with autonomy, persistence and endurance, and  modular payloads that can be changed as the mission dictates, along with the ability to net all those together for communications and information flow.  .
Another important area is that we need to understand the electromagnetic spectrum, and optimize how to move and protect that data.
And then we get into electronic warfare.  We need to make sure that that data is protected as we’re sending it out, and it’s protected as it comes back.
The fourth area is directed energy, not only from the capability it provides—with lasers, electromagnetic rail guns, or high-powered microwaves—but also the affordability.  We’re talking about systems where you can shoot a round a pulsed-energy for less than a dollar, and create the effect you want.  That’s compelling to me and that’s a focus that we have at ONR.
Finally, the fifth one really comes back to people.  With all the great technology I just described, it’s only as good as the people behind it.  So we need to train our people to handle all those new technologically impressive systems.  So we’re focusing on live virtual constructs, where live operational units integrate fully with virtual constructive units or avatars to create an optimized training scenario that’s very affordable.

So what’s your metric on affordability?

We start with the equation: what is the threat potentially coming at us with, and what does it cost; and do I have an effective defensive system for that, and is it more affordable that what it has to defeat. Some people call it “flipping the cost curve on your adversaries.”

There are a lot of ideas out there, from academics, military people, or companies. If they think they have some science or technology that can contribute to the Navy-Marine Corps mission and to defense, how might they be able to bring that in?

The normal process is through our broad area announcements—or BAAs—that we’ll release through our web site to all the performers and they can come in and provide us with white papers and ideas.  But we have also started open forums here at ONR where we sit around and talk about these issues.  The first one we had back in January was on autonomy.  It was hugely successful.  We’re probably going to do our next one on information/C4I, and we think that’s probably appropriate for the time, based on our focus on the electromagnetic spectrum and cyber.  We want to share what we’re focusing on. And we want to know “what are you focusing on?” We have a general discussions in the morning, and one-on-one opportunities in the afternoon to present a proposal, a white paper, or do a poster board.  We have a large Tech Expo every two years, but now we’re allowing these focus area forums to happen with the general, technical, research community about once every 3 to 4 months.

We’re looking at all sorts of different mediums to move data in the undersea domain.   I will tell you that we have successfully done it—I can’t say the ranges or the times—but I’ll just tell you we’ve done it.  I’m feeling more and more confident as we understand the dynamics of the water and all those kind of obstacles underneath the water, that we’ve got a pretty good understanding on how we can move that data in real time.  And it’s not only, it’s through the water medium, but it’s also through the air-sea interface medium as we might port it up to airborne assets or to a maritime operational center.  You may want just one vehicle out there all alone, which has advantages, but we think there are advantages in being able to distribute in a netted kind of way of those undersea vehicles and sensors.

You mentioned the air-sea boundary.  What kinds of progress are we making, or what’s new and exciting about our understanding of the atmosphere and the ocean so that we can be masters of those domains.

We’ll never be the “masters” because Mother Nature still holds that in her precious hands.  But ocean science is part of our heartbeat here.   The Arctic used to be described as a frozen maritime desert, a lot of ice but not a dynamic environment. In the last few years, however, the Arctic has become extremely dynamic and unstable.  We are heavily involved in trying to understand that dynamic and potentially forecast that dynamic.  And while I’m inside that dynamic, how do we understand and monitor in real time the limitations to communication, to movement, etc.  We’ve been able to look at it from all angles of the domain—from airborne platforms;  pre-positioned ice sensors; and undersea vehicles that are beneath the first year sea ice—now we’re netting all those together in a real time way and looking at that constellation of data regularly.  We want to understand it better, we want to be able to forecast it better, and then we want to be able to operate up there better.

Can you tell me a little about the Transition Insertion Program (TIPS) and the Rapid Innovation Fund (RIF), and how small businesses get engaged?

We depend on small businesses—not only for the TIPS program and the RIP program, which are very powerful, but even in some of our large prototypes.  The electromagnetic railgun system that we designed and developed down in Dahlgren had eighty small businesses involved in that effort.  It could be through metal science, it could be through mechanical engineering work – that’s 80, in just that one program alone.  And that’s a pretty big program.  The smaller TIPS kinds of insertion programs have done some tremendous things for us.  It could be in propulsion, advanced energy management, or battery storage

Science, Technology, Engineering and Math (STEM) programs are big today, but ONR has been promoting STEM for a long time.

STEM is hugely important to us.  About half of the engineers and scientists at our laboratories and our warfare centers will be eligible to retire in the next 10 years.  That’s almost 50 percent of our workforce.  The “greying” of the science and engineering community—especially in information technology, cyber, ocean and nuclear engineering, those areas that are very important to the Navy and the Marine Corps—means we have to strengthen the pipeline of young people coming into these STEM areas.  We are going to start to really focus on middle school to high school in the pipeline.  Our SeaPearch program captures that 7th to 8th grade into high school.  You build from there.  The next step would be a high school internship at one of the labs, such as NRL, Dahlgren, or Carderock. Then we get them interested in an undergraduate program in one of the STEM disciplines, and they might come into a summer internship as an undergrad.  And then there we’ve got a progression.  We will be developing young people with skills and aptitudes for STEM disciplines that we need in the future. 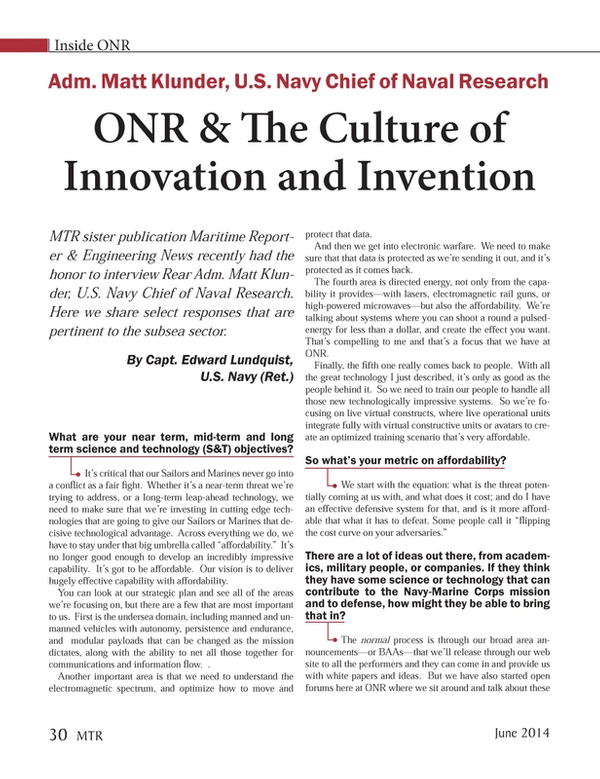 Read ONR and the Culture of Innovation and Invention in Pdf, Flash or Html5 edition of June 2014 Marine Technology