For 150 million people living in coastal areas around the world, rising sea level will become a genuine threat, according to a new study which found evidence the sea level has been rising over the past 200 years – and continues to rise.
Ocean warming and glaciers/ice sheets melting are the causes of the sea level rise, said Dr. Svetlana Jevrejeva from the U.K.’s National Oceanography Center (NOC), who coauthored the scientific research paper “Trends and acceleration in global and regional sea levels since 1807,” which examines tide records from 1807 onward to determine global sea level changes.
“There is a huge inertia in the climate system, so even if we stop the warming of our planet now – if we stop emitting greenhouse gases into the atmosphere today – the global sea level will continue to rise for the next few hundred years,” Dr. Jevrejeva said. “We are facing a colossal challenge – to deal with carbon emissions as soon as possible.”
With about 150 million people living within one meter of high tide globally, sea level rise is one of the most damaging aspects of a warming climate. The vulnerability of extensively populated coastal areas, the threats to infrastructure, and population migration are major concerns for society, Dr. Jevrejeva said.
“Fifteen of the world’s 20 megacities, with populations of more than 10 million, are sensitive to sea level rise and increased coastal storm surges. Soon we will have to make very hard decisions in the U.K. and globally: which coastal area is going to be protected and which could be abandoned? It means that as a civilization we are not able to protect some of our cultural heritage, unique beaches and cliffs.”
“Trends and acceleration in global and regional sea levels since 1807” was published in the Global and Planetary Change journal and coauthored by Dr. Jevrejeva and JC Moore from the Beijing Normal University in China, A Grinsted from the University of Copenhagen in Denmark, AP Matthews from NOC and G Spada from the Dipartimento di Scienze di Base e Fondamenti, Università degli Studi “Carlo Bo” in Urbino, Italy.
The study looked at global sea level reconstruction based on 1,277 tide gauge records dating from 1807 to 2010. Tide gauge observations suggest that sea level rose by 6 cm during the nineteenth century, 19 cm during the twentieth century, and the sea level has continued to rise this century.
To understand the past sea level rise the researchers used the historical tide gauge records collected by the Permanent Service for Mean Sea Level (PSMSL), based in Liverpool at the National Oceanography Center. Established in 1933, the PSMSL has been responsible for the collection, publication, analysis and interpretation of sea level data from the global network of tide gauges. 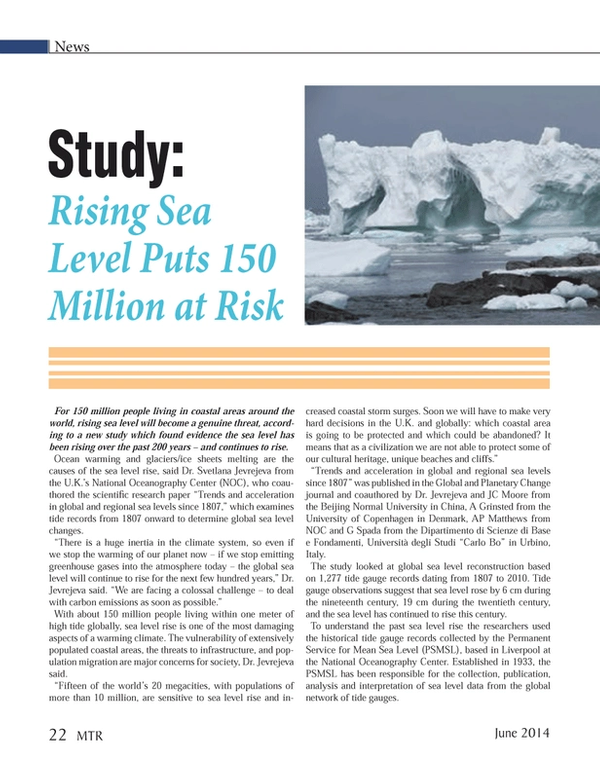