According to the International Association of Dredging Companies’ (IADC) Dredging Figures 2013, the global dredging turnover grew nearly 3% in 2013, nearly hitting the $13 billion mark. More significantly, even in bad economic times the industry recorded solid growth. Growth of 13% to be exact, from $11.4 billion in 2008 to $12.97 billion in 2013. Following is a statistical abstract of the most recent data from the world of dredging. IADC celebrates half a century with the publication of a special limited edition  book, ‘Beyond Sand and Sea.’ Full details can be found on page 49.

1. World Trade
As the majority of the world’s goods transport via ship, it stands to reason that dredging need correlates closely with world trade. Figure 1 indicates a long-term, positive trend in World trade more than doubling over the last 30 years. In addition, ships are getting bigger, and ports are becoming more snarled than ever. The need for dredging is central to maintaining and building port capability.

3. Coastal Protection
Increasingly severe weather has put many coastal areas at heightened risk for significant damage from wind and waves when disaster inevitably strikes, as became alarmingly clear when Hurricane Sandy wrought damage in Manhattan in the autumn of 2012.. Dredging activities can go a long way in helping to shore up shorelines.

4. Offshore Energy
As population, Urban areas and world trade grows, so to does the need for Energy. It is estimated that 5% of the world’s energy finds must be replaced every year, and increasingly companies are searching in deeper waters, further from shore, to score major new energy finds. This hunt for fossil fuels demands a lot of dredging, to prepare the seabed to digging trenches for pipeline and cabling.

5. Tourism & Leisure
Tourism along coastlines and beaches remains a growing phenomenon, from the small personal watercraft to the mammoth cruise ships roaming the world and further stretching port facilities and infrastructure. In addition, the replenishment of beaches from weather-related erosion is ongoing. But curiously, while tourism shows a steady growth of 4 to 5% over the last 5 years, dredging related to tourism has decreased from 4 to 3% according to Dredging Figures 2013.

‘Beyond Sand and Sea’
A Limited Edition Book

To celebrate a half century of maritime infrastructure construction, the IADC members dug deep into their archives to gather photographs of 50 major projects realised over the last 50 years. These photos and descriptions illustrate vividly that dredging is far more than excavating sand and placing it in the sea. The book defines where the dredging industry started and how far it has evolved into a supplier of essential maritime infrastructure for land development, the oil and gas offshore industry, wind energy, ports and harbours and coastal protection in these times of climate change. 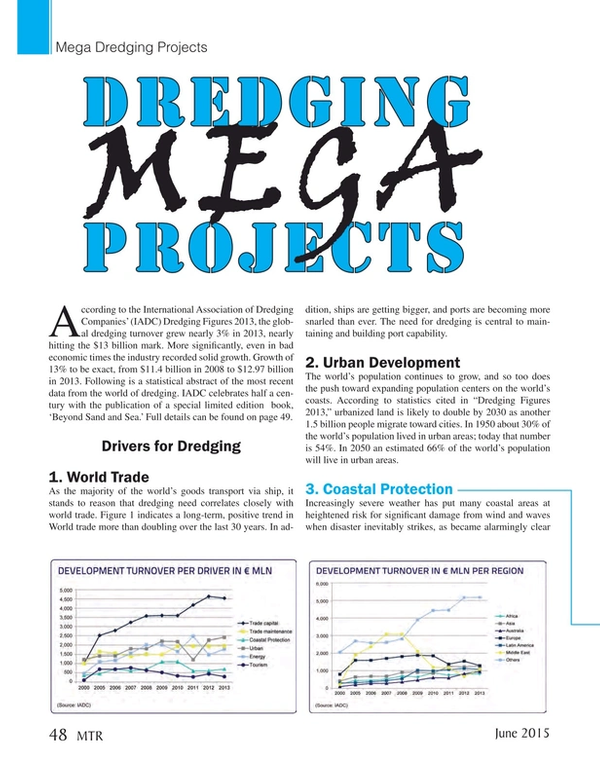