AUV Monitors Environment at Underwater Mine

Blue Ocean Monitoring (BOM) completed a contract in Indonesia working for PT Newmont Nusa Tenggara (PTNNT).BOM’s task was to use its Slocum Glider to monitor PTNNT’s Tailings Placement Program at its Batu Hijau copper-gold mine in Sumbawa, Indonesia. The program involved the tailings from the mine being piped (3.2 km) out to sea and deposited off the continental shelf, where the depth reaches in excess of 4,000m.
BOM’s autonomous underwater vehicle (AUV) Slocum Glider was deployed to monitor that the tailings were not being disbursed into the coastal environment of Sumbawa or surface waters. The monitoring program lasted for three weeks.
“The project ran smoothly from start to finish and the data returned by the glider showed the Placement Program is proving to be a success,” said Simon Illingworth, CEO of Blue Ocean Monitoring. “The Glider was able to determine quickly at the outset of the project whether Newmont’s Tailings Placement Program was doing what it had been designed to achieve. This was very important given the cost, magnitude and environmental sensitive nature of the program.”
BOM has a fleet of four gliders, making it the largest commercial Slocum glider operator globally, the company noted. The glider provides persistent near-real time ocean information via a secure proprietary data acquisition and visualization system.
www.blueoceanmonitoring.com 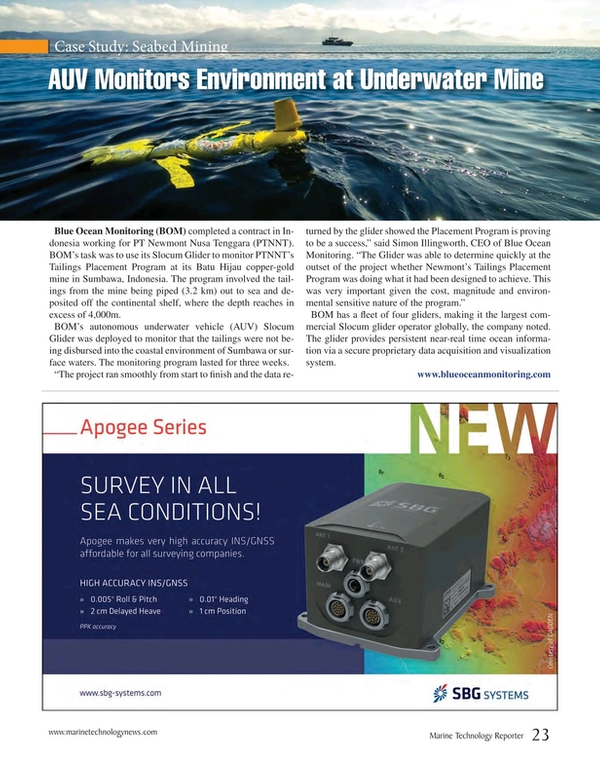