Retrieving Valuable Cargo from the Seabed

Surveyors are usually engaged to investigate the cause, nature and extent of a claim, damage or incident. Their role in managing projects to salvage cargo is less known. Peer van Oosterhout and Ad de Klerk from BMT Surveys share their experiences in salvaging a cargo worth several million dollars from the seabed in the Mediterranean.

Recently, BMT Surveys in Rotterdam was approached by a major European-based underwriter, to investigate the possibility of salvaging a high value cargo from a vessel that had sunk in about 100 meters depth of water in the Mediterranean. Even though the cargo value was significant, the location and other operational considerations made the salvage venture potentially marginal if it was not carefully managed with time and costs controlled.
The initial appointment was to arrange and carry out a feasibility study to assess how much cargo could potentially be recovered and to gauge whether it was commercially and operationally viable. In coordination with the insurer, a diving survey and salvage company was appointed with an appropriate survey vessel to conduct a sonar side beam survey of the site which was 35 nautical miles from the shore. With BMT in attendance, a sonar side scan survey was carried out. This was then followed up by the use of a remotely operated vehicle (ROV) equipped with underwater video equipment.
Once these operations were completed, the collected data was analyzed. The analysis confirmed that the majority of the cargo lay scattered on the sea bed close to the ship. This allowed the cargo to be accessed without having to disturb the ship, which would have resulted in a larger and more costly operation. The insurers were provided with a report, including video footage of the wreck site which supported the opinion that, with the correct equipment, about 75 percent of the cargo could be salvaged. Subsequently, insurers decided to salvage the cargo and BMT was appointed to assist and manage this recovery process. This included; liaison and negotiations with authorities and interested parties, finding a safe and secure port to land and store the recovered cargo and on-the-spot monitoring of the operational activity. BMT also assisted the insurers with the sale of the recovered cargo.
The operation took nearly four weeks and eventually 80 percent of the cargo was recovered. The proceeds of the salvage sale were significant and concluded a successful operation.
www.bmtsurveys.com 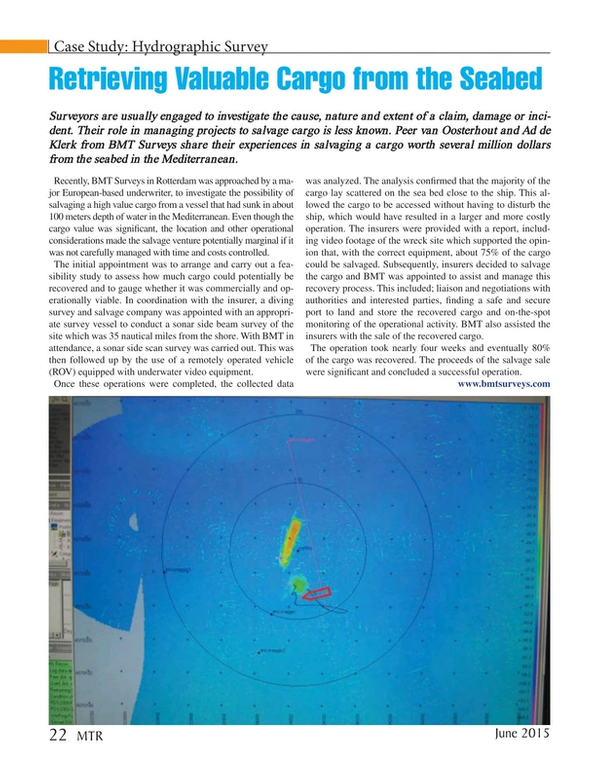