Roaming the tents on the National Oceanographic Center in Southampton on the occassion of Ocean Business 2015, we came across a new AUV design out of Italy. As one might expect with its pedigree, it is all black and stylish. Its designers contend that the beauty of SeaStick is far more than skin deep. We caught up with Roberto Nardini for some answers.

Hailing from Italy, the story of the development of the Seastick, a new autonomous underwater vehicle (AUV) for the subsea market, starts the same as a great number of other stories told in this indsutry: Built with a generous mix of experience and wisdom with some of the best up and coming bright minds. Nardini explains.
“We are a team of mostly young people (everyone in the technical staff is under 30 years of age) that, combined with the experience of our CEO, who spent his whole life working in the submarine technologies field, is able to handle such a massive project like the Seastick. Every one of us comes from very different fields of studies: physics, mechanical engineering, electronical engineering, marine biology. That makes us a very flexible team and let us face many problems with ease, and is in this flexibility that lies our true strength.”
Part of the flexibility of the new design comes courtesy of its capability too, designed as a vector capable of being able to mount  any type of sensor according to customer request, thanks in part to its modular design which provides the possibility to expand and enhance the basic configuration.
And while Seastick is new, the concept is ripe, as it has been in development for eight years, with more than three years of sea testing under its belt before making its market debut last year.

From the Beginning
Development of any technology is a perilous path from design sheet to market, particularly in an ever-crowded subsea vehicle field. But every system has its limitations, and Seastick was designed to address problems in the market with an innovative solution. “When the Seastick Project started, our aim was to create a compleately modular vehicle capable to integrate any kind of sensors with the maximum flexibility and very easy of use,” said Nardini.
“Our aim is to improve the possibilities of action and usage of a basic autonomous  underwater vehicle. In the past years we developed a great experience in the ROV and AUV market so we know what the problems of dealing with such vehicles are, in a practical way and not just in theory, and we are trying to make them less problematic. That’s what was on our mind: to keep everything as simple as possible, even in a such complicate field such as underwater robotics.”
To that end, Seastick is designed to work in almost every field an AUV could work, for both civil and a military uses. According to Nardini, a key design diffentiator is its dual control method. It is possible to operate the vehicle in automatic mode, by loading a mission made through its mission planner software, and it is also possible to operate in manual mode through Wi-Fi while on surface and through umbilical cable while submerged, making it behave like a ROV.
“Often, to keep things smoother and more simple you need some new technology, since the old one isn’t suitable for that purpose,” said Nardini. “That’s why we have to develop new technologies that suit our needs. And that’s how our motors were born. We needed a piece of equipment capable of being more efficient than the usual motors, something that would allow the Seastick to make some maneuvers that were impossible until now. Seastick can hover, turn around his own axis, do omnidirectional movement and variable steering angles. It can also do a spin!”
And proving that old can be new, the developers are using a Wi-Fi system for the remote control of the vehicle and for the downloading of data in real time.”
“The actual panorama in the AUV market is not properly varied,” Nardini assesses. “We designed the Seastick thinking about something unseen till today, and we are very satisfied with our result. Our system is different from other AUVs, starting with its shape and including the usage methods and the possible uses. We think is a good time to invest in this project because is something completely different from the other vehicles.”

Challenges Ahead
Even the best laid plans face challenges aplenty, and this is not the exception for the developers of Seastick. “Our greatest challenge was, and still is today, making the Seastick fully customizable and modular, to make it able to mount every type of sensors,” said Nardini. “At the beginning of our project that was our biggest problem: every sensor needs a specific support and a proper wirework. It also needs its own software integration in a way that comply with the previously installed sensors. So the difficults came from both the mechanical and the software sides. We solved all of our mechanical problems by using a 3D printer. With this solution we can design and print all the supports we design making us independent from other manufacturers and allowing us to design and build all the specific supports we need quickly. It also allows us to make specifics flotation chambers in order to improve and calibrate the buoyancy of the vehicle.”
In addition, Nardini admits that the software side is the most energy and time intensive part of the process in the making of a Seastick. 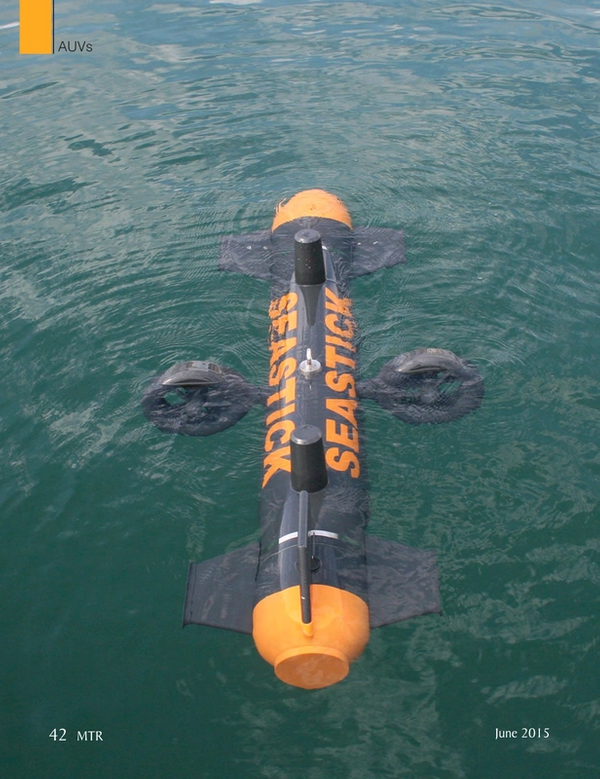