No Well Left Behind

Not knowing how connected or compartmentalized a reservoir is when evaluating appraisal or development drilling is a major concern. So, too, is well integrity.
Having a better understanding of reservoir connectivity can provide significant benefits in determining the most effective drainage and field-development plans.
One route to reducing uncertainty is to maximize time spent appraising the prospect. While multi-well interference and long-term pressure testing provide valuable data on connected volumes, there is always time-cost pressure to curb testing time, especially in the high-cost, deep-water subsea environment.
As a result, well testing operations may be terminated early, before there has been sufficient time for the “pressure-transient response” —monitored during a pressure buildup period — to adequately investigate distant boundaries. This can mean that critical decisions regarding future field development plans are taken based on limited or insufficient data sets.
There is also an increasing industry focus on the development and application of new technology for well integrity monitoring. Examples include the long-term monitoring of the pressure in multiple annuli (the spaces either side of drill casing) in subsea production wells and the verification of pressure barriers during well suspension or plug and abandonment (P&A).
Wireless can be deployed to address of these concerns. Reservoir and well integrity monitoring are about preventing the offshore industry’s most serious reverses.

Extended Reservoir Monitoring
Via the application of wireless, well testing no longer has to end at well abandonment. Advanced reservoir testing now enables abandoned wells, zones or pilot holes to be monitored for extended periods beyond final well abandonment.

Post-abandonment reservoir pressure data is being used by operators to monitor for connectivity with adjacent assets that are either being produced or injected into, and to collect long term pressure buildup data to investigate far reservoir boundaries and establish connected volumes. This is proving to be highly valuable information that would not be detected during the course of a typical 48-hour or 72-hour pressure buildup performed during a drill stem test (DST). In either case, high-value reservoir data is being collected over long monitoring periods and at low incremental well cost.

In Cableless Telemetry Technology, or CaTS, that pressure data is transmitted wirelessly using a digital signal that provides reassurance no loss of fidelity will occur in the transmission’s data. Each gauge has its own address, so multiple discrete (well/reservoir) zones can be monitored. Twenty zones have been instrumented successfully in a single well comprising stacked reservoir sands.

The pressure/temperature data transmitted from downhole is stored at the seabed in a battery powered subsea receiver rated for water depths of 10,000 feet. The data is the collected from the receiver by a supply vessel passing overhead the abandoned well location and uploading the data from the receiver using wireless through-seawater communications.

Once installed in an abandoned subsea well, there is no requirement to reenter the well using a semi-sub rig. The only remaining abandonment liability is to sever and recover the wellhead at a convenient time in the future, typically by workboat.

Better Well Safety
Based on electromagnetic (EM) communications technology, CaTS can also be flexibly located in any annulus and the pressure and temperature data can be wirelessly transmitted to a seabed receiver without requiring any wellhead penetration.

In terms of barrier verification, the NORSOK Standard D-010 covering well integrity in drilling and well operations requires that a plug is verified to the maximum differential pressure at the time of barrier placement. CaTS communications technology is unaffected by bridge or cement plugs, making it ideally suited to short-term and long-term well integrity monitoring.

During workover or P&A (plugging) operations it is common to install both deep and shallow set bridge plugs as temporary barriers at an early stage of the operation. In some wells it can be necessary to establish these two barriers deep in the well and relatively close together. The sealing integrity of the lower plug can generally be validated by pressuring from the surface and monitoring for any leakage using a surface pressure gauge. When installing the upper plug, and due to the relatively small volume of fluid between the two plugs, it is unlikely that a pressure test applied from surface will detect leakage past the upper plug. So, results might be inconclusive when using surface measurements to verify the upper plug.

By installing a wireless transmitting pressure gauge below the upper plug, it is now possible to monitor the pressure below the plug in real time at the surface during pressure testing. Monitoring requires no other equipment in the logging string used to deploy the plug and can be completed during the run of a downhole operation. Well abandonment barrier verifications have been completed from light-well intervention vessels on 13 subsea wells in Norwegian and British sectors of the North Sea.

Direct Network
CaTS transmits high-quality pressure and temperature information from reservoir to seabed using the well’s tubing, casing or liner as transmission medium. Signals also transmit from seabed to reservoir for the control of downhole hardware like flow control devices.

Under favorable well conditions, this wireless technology has achieved point-to-point transmission ranges in excess of 12,500 feet without relay or booster stations in the well. By cutting the number of in-well equipment, deployment time and monitoring costs are lower.

Using standard completion components means there is no requirement for special high cost plugs or packers with penetrations. CaTS wireless can be retrofitted into existing wells using wireline or coil tubing and can be externally or internally mounted on a tailpipe below a permanent packer during a DST. It also deploys as part of a lower completion assembly for sand-face monitoring.

After tests in the abandoned appraisal wells of Clair Field, market demand for Expro reservoir testing has grown. Wireless is now monitoring reservoir pressure in abandoned or suspended subsea wells the arctic Barents Sea and the tropical Santos Basin of Brazil.

The future for CaTS technology is being developed for monitoring and control applications in advanced completions. For Expro, at least, the ultimate goal is delivering the Wireless Reservoir. 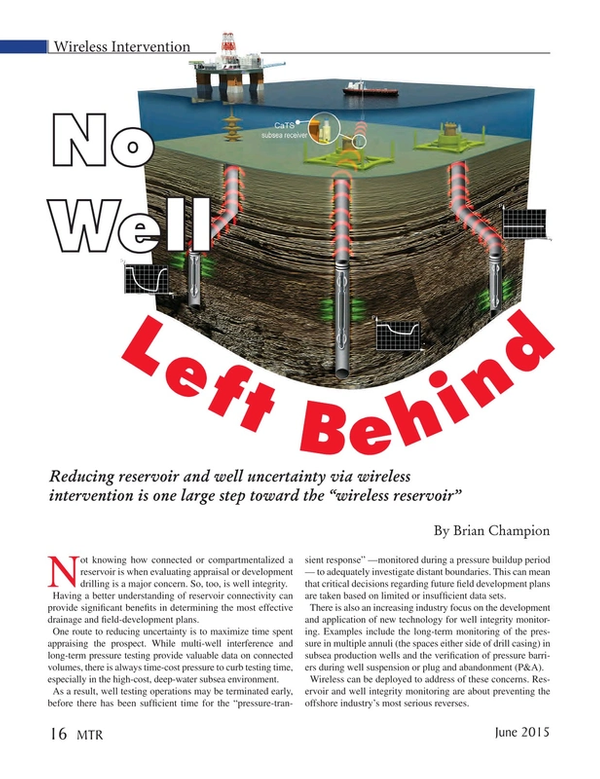 Read No Well Left Behind in Pdf, Flash or Html5 edition of June 2015 Marine Technology