Unmanned air and ground systems work together from single controller in flight demo; UCS architecture enables collaboration between big and small business.
A flight demonstration using a hand-held tablet has shown how unmanned air and ground vehicles can be supervised together by a single operator, and how big and small businesses can work together. The demonstration was conducted on March 26, 2014, at Kaman Aerospace in Bloomfield, Conn., involving a Kaman K-MAX helicopter equipped with Lockheed Martin’s mission management system operating in the unmanned mode, and a Neya Systems UxInterceptor unmanned all-terrain vehicle. During the medical casualty response and resupply scenario, the two vehicles were given instructions by a single operator using a VTOL Evacuation and Resupply Tactical Interface (VERTI) Medic Interface and UxFleet / Collaborative Mission Planning system from Neya Systems.
The flight test showed how the UCS Architecture can integrate a handheld ground control station with the aircraft and ground vehicle and enable collaborative activities between multiple autonomous platforms.
Neya Systems, a small business located in Wexford, Pa., near Pittsburg, developed the rapid prototype and demonstration effort leveraging several different small business innovation research (SBIR) grants and follow-on DoD funding. The company was partnered with the Lockheed Martin and Kaman team to deliver the innovative technology to existing systems.
The UCS architecture enabled the seamless integration of the K-MAX helicopter with the Lockheed Martin UCS-compliant ground control station; the UxInterceptor UGV and the Neya VERTI android tablet. Using the UCS-compliant VERTI system, there was no redesign of the UAS or UGV system required.
The user interface on the tablet is simple to use. The operator conducting the demo had no previous experience controlling unmanned systems and was able to control both the UAV and UGV at the same time after just one hour of familiarization training. 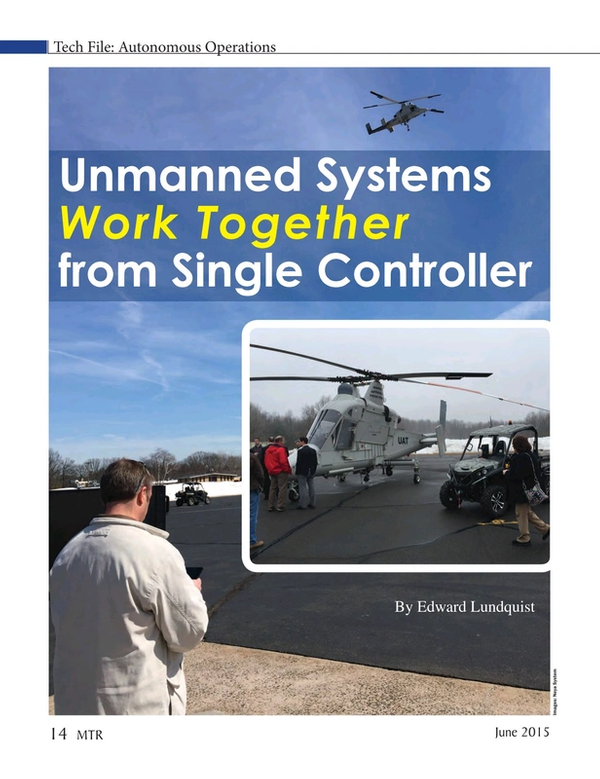