IMR specialist N-Sea used a wet repair habitat to complete an in-situ subsea cable repair. The habitat was developed by Moyle Interconnector Ltd. as part of the seabed repair project, with ESB International the owner’s engineer for the project. The habitat allows repairs to be implemented in-situ below sea level, as opposed to the conventional method of recovering the subsea cable prior to repair. The diving scope was performed as part of a Moyle Interconnector project to carry out the repair on the Moyle Interconnector cable, a 500MW HVDC electrical interconnector, in the Irish Sea.  The interconnector cable links the electricity grids of Northern Ireland and Great Britain through submarine cables running between converter stations at Ballycronan More in Islandmagee, County Antrim and Auchencrosh in Ayrshire. The fault area was located approximately 2.5km from the Scottish coast and submerged between one and three meters below the seabed, in approximately 25 meters of water. Explaining the technology and design behind the product, CEO Gerard Keser  (pictured above) said, “The principle employed by ESB International is based on an incubator design which surrounds the cable section whilst providing a dry and conditioned repair option. We deployed our TUP Diving System (Transfer Under Pressure) along with one of our subsea support vessels, the Siem N-Sea, which allowed the cable to be repaired in its current position.”
www.n-sea.com 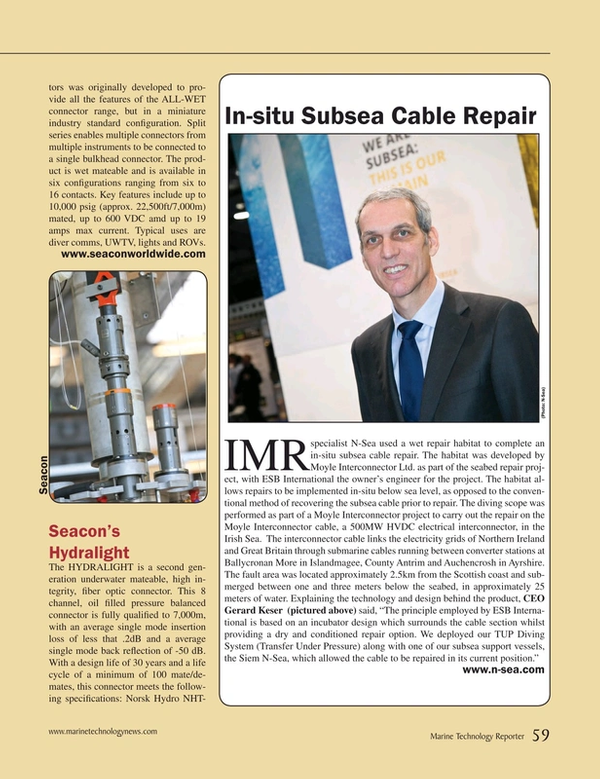