Why the wild ride for company valuations?

The financial crisis and global recession that began in 2008 had a major impact on almost every major world industry. Its effects can be examined by analyzing historical data and trends for the highly cyclical maritime industry, including both public company values and mergers and acquisitions (M&A) transaction records. All major stock indices and deal metrics fell in concert at the outset of the crisis, which is usually marked by the collapse of Lehman Brothers on September 15, 2008. Over the ensuing five years, individual segments such as ocean shipping, marine terminals and offshore service vessels experienced varying market fluctuations and recovered at different rates for different reasons.

Boom to Bust
Figure 1 shows the effects of the crisis as the boom turned to bust from 2007 to 2009, with decreasing M&A deal flow and overall reduced company valuations. The red numbers on the graph in Figure 1 represent the average multiple of operating earnings, or EBITDA (Earnings Before Interest, Taxes, Depreciation and Amortization) for each year. The EBITDA multiple enables us to compare transaction values by adjusting out non-cash items such as depreciation, and financial variables such as interest payments that can change from buyer to buyer.
Until late 2008, the deal environment was decent, with deals such as Maersk Tankers’ $1.3 billion acquisition of Swedish Brostrom AB. At the time, Maersk CEO Nils Smedegaard Andersen was cited as saying that A.P. Moller-Maersk A/S was ready to grow via acquisitions of shipping companies. However, by the middle of the following year, stock prices had dropped across the board and Maersk fell 60% from its 2008 high to 2009 low.
Market dysfunction caused by the financial crisis resulted in a very low number of maritime deals in 2009, of which many were marked by relatively low valuations. In March of 2009, the Dow Jones Shipping Index (see Figure 2) hit a low EBTIDA multiple of 2.8X, meaning that the collective average multiple for the public companies that constitute that particular Dow index were trading at that low valuation. Later in the year, Araltec SL of Spain bought a $112 million stake in Kirby Corporation (NYSE: KEX) at an opportune time with an EBITDA multiple of 6.7X.  Since that time, Kirby’s stock price is up 280% and the dominant US inland and coastal liquid product carrier trades today at an expansive multiple of 11.1X EBITDA.

Trending Upward: with caveats …
In 2010, the market began to trend upward in completed deals, and stock prices had begun to rise steadily in anticipation of a market recovery. By Feb 2010, the Dow Jones Shipping Index was up 58% from its low point just a year earlier, and the stocks in the index traded at a very generous multiple of 8.9X EBITDA. The large gyrations evident in Figure 2 show that publicly-traded shares often experience more pronounced swings than those of private companies. Toward the end of 2010, the pace and value of deals had picked up in both large shipping and ports deals. In November, a consortium of investors acquired the Port of Brisbane in a $2.8 billion deal with a healthy 16.3X multiple.
Moving into 2011, deal multiples continued to rise overall and we saw a significant jump in the overall weighted average multiple for the year (Figure 1). Much of this was driven by a number of large port and port services deals, including two in Hong Kong and China with multiples north of 40X. A bit closer to home, Forth Ports PLC of the UK was acquired by Arcus Infrastructure Partners in a $1.3 billion deal that yielded a 14.9X multiple. However, it was during this period that the impact of excessive building and overcapacity in the ocean shipping markets became clear. New ship deliveries that had been booked during the boom in 2007-2008 continued on schedule, despite the slowing recovery in demand for international bulk and container transport. These conditions put pressure on carriers, and we can see a significant drop in the Dow Jones Shipping Index beginning in April, 2011.

Recovery and a Look Ahead
It wasn’t until 2012 that the wild market fluctuations began to steady out a bit, though at stock and deal values somewhat lower than pre-crisis levels. From this point, the most noticeable trend is the divergence of company performance and values among the various maritime sub-segments. The sustained separation of public company values in the past few years includes containerships, drybulk, tankers and inland/offshore companies. Energy-focused companies in the inland/offshore workboat market have outperformed all larger shipping segments by a wide margin, while oceangoing tanker stocks have fared better than cargo and bulk carriers.
On the acquisition front, Kirby Corporation has been the most prominent player in the inland and coastal segment, with six acquisitions since 2008 totaling about $800 million. The most interesting story among the larger carriers has been the workings of distressed asset investor Wilbur Ross. Mr. Ross has set his sights on the shipping sector, having acquired 44% of liquefied gas carrier Navigator Holdings LTD out of the Lehman Brothers bankruptcy for $110 million in 2012. He later increased his equity position to 60% of Navigator, which was recently valued at about $1 billion after a successful initial public offering (IPO).
Today, Mr. Ross and other investors see the potential for strong returns in the shipping sector.  As the world economy seems to be slowly improving, international trade is increasing and the industry remains very fragmented.  Despite poor performance over a longer period, containership stocks have mirrored the strong performance of the S&P 500 in 2013, and dry bulk carriers have bested the returns in all other maritime segments through November.  The shale petroleum and fracking booms have driven increased demand for shipping in the US, and Gulf of Mexico oil production continues to drive the offshore market. Barring a major macroeconomic setback, maritime companies and deal flow are poised for a solid showing in 2014. 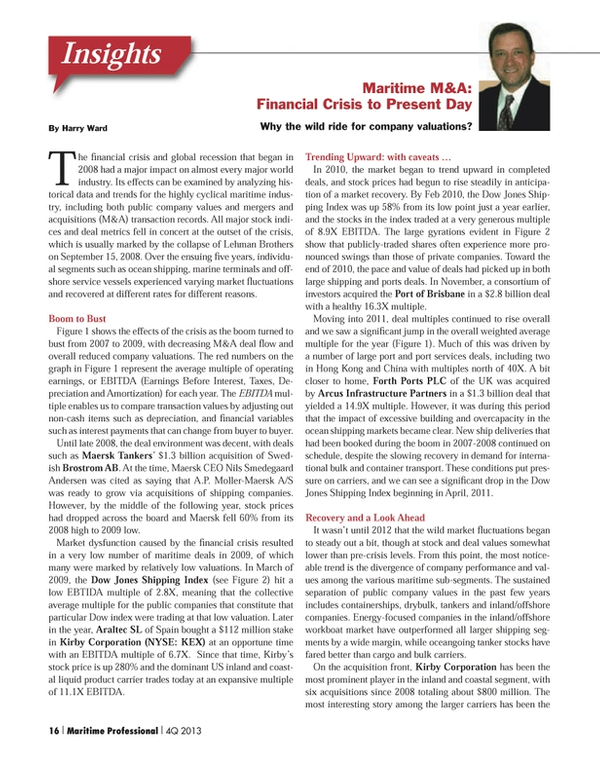