The time to install a Ballast Water Treatment (BWT) System or maybe an Exhaust Gas Scrubber is rapidly approaching. Or, perhaps, you are an inland vessel operator watching the subchapter M drama with great interest. In all of these cases, most vessels have limited space in which to install these items. That said; as the regulatory uncertainty with regard to the impending regulations dissolves, the high cost of installing these systems will not go away – unless, of course, emerging technologies can ease that pain somewhat. Fortunately, and just ahead of the regulatory enforcement, comes FARO’s new 3D Laser Scanning system.
Even without new environmental requirements, the marine Industry is in great need of applying emerging technologies like 3D Laser Scanning to a myriad of new tasks. Tens of thousands of aging vessels will soon need equipment retrofits, most of which involves navigating narrow, tight, and limited space areas. Even for those owners who have archives of original drawings, those general arrangement depictions may not accurately reflect the current situation on a given vessel, especially one which has been around for a while and seen its share of repair yard insertions. Hence, equipment retrofit is typically extensive, costly, time consuming, and fraught with measurement errors. It doesn’t have to be that way.

Old School
The typical approach when performing ship checks is to bring designers and/or engineers on board where, using tape measures, they record measurements of the existing systems and spaces. These measurements are then used in developing scope and construction documents. However, the uncertainty of the measurements requires allowances be included to account for discrepancies between the measurements and reality. These allowances can be expensive and/or prevent the installation of new equipment in a certain location because the space was considered too small, when in fact there was adequate clearance. Or, conversely, maybe not enough at the time of installation.

3D Laser Scanning
A better approach involves scanning ship spaces with a 3D laser scanner to create a very detailed and accurate 3D point cloud model. Today’s high speed laser scanners are quite suitable for this purpose as they can take tens of millions of measurements in just a few minutes. Scans are taken from various positions in order to provide sufficient coverage around equipment. The scans are then registered together to bring them all into the same coordinate system. Done properly, with the latest FARO Focus3D scanner, the laser scan data can be accurate to within 3 mm over 10 meter distances.

With all these benefits, the use of 3D Laser Scanning, despite its availability, nevertheless has not become a mainstream practice in ship repair and retrofit operations. The reasons why come down to three main issues. These include cost of hardware, capability and difficulty of use, computing power limitations and inconsistent workflow and software solutions. Fortunately, most of these issues have been addressed, as depicted below:

1. Hardware Cost and Difficulty of Use
Until recently, laser scanning equipment was cumbersome (multiple components with total weight over 150 lbs) expensive ($150,000+), requiring highly skilled crews to operate. With the recent offerings from FARO, however, the new Focus3D scanners weigh in at just 12 pounds, at about one-third the cost and are similar in operation to a high end digital camera. The new scanners can, with one person, take significantly better measurements in one day than a ‘ship check’ team can accomplish in a week’s time. More significant, perhaps, is that every vessel can perhaps justify having a scanner on board, allowing the Chief Engineer or Project Manager to direct work in detail within 3D model shots of his machinery spaces. With this approach, the cost required to obtain accurate measurements has been greatly reduced – and can be accomplished from far out to sea, well in advance of the repair procedure.

2. Computing Power Limitations
Another barrier to wide acceptance of 3D Laser Scanning was the huge data sets that bog down computers and made it difficult for managers to visualize their projects in the 3D Point Cloud. Autodesk ReCap and Bentley Pointools among others have and are making great strides to overcome this barrier.

3. Difficult Workflow and Software Solutions
The next limiting factor is the work flow and software that allows CAD Designers to work directly in the 3D Laser Scan Point Cloud model and apply statistically valid algorithms to the point cloud data for feature extraction of system components such as piping, structure, and more. The software available on the market to meet this need has grown considerably over the last few years and is available from such companies as Kubit, Innovmetric, Edgewise and Kohera3D – just to name a few.

Design & Retrofit – The Way Forward
Although it is possible to continue using the “brute force” methods of the past, 3D Laser Scanning has emerged as a valuable and accessible technology that will continue to make measurable strides in the shipyard industry, and beyond. But, if you’ve got all the time and money in the world, and you don’t like to think too much, then continue on as before. 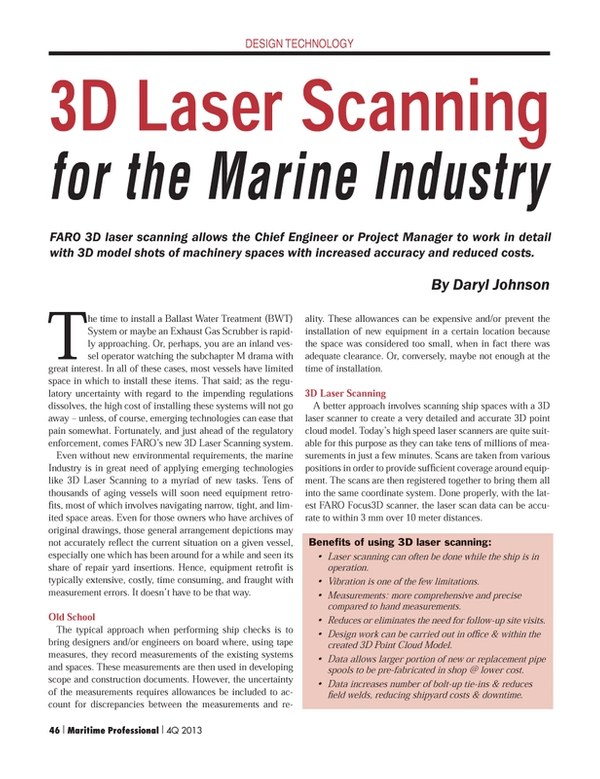