Estimated to cost $78 million each, the vessels would be powered by slow-speed diesel engines. The ODS, if approved, would pay for up to 50 percent of that amount.

Levingston Shipbuilding Company of Orange, Texas, is the proposed builder, with deliveries set for September 1982 and April 1983.

Each of the seven-hold ships would have two onboard, 30-ton gantry cranes, and capacity to carry about 1,300 TEUs.

The combination carriers would operate on a triangular trade route, unique for the U.S. flag, hauling mineral sands or alumina from Australia to U.S. Gulf or East Coast ports; non-preference bulk loads such as phosphate and grain from the U.S. to Europe ; and containerized cargoes from Europe to Australia and New Zealand. It is estimated that the triangular voyage would be made in 114 days — 85 days at sea, 26 days in port, and three days in canal transits.

A typical itinerary for the service could be loading containers at Southampton, Hamburg, Zeebrugge, and Livorno for carriage to Melbourne, Sydney, and Freemantle, Australia, and Auckland, New Zealand; transport of mineral sands from Geraldton, Australia, to Gulfport, Miss.; and shipment of grain from New Orleans to Antwerp.

First American's application for CDS indicates that the break-even point for the two vessels would be about $5.8 million of cargo revenue annually at 80 percent of capacity.

The application further lists the directors of First American as Jesse M. Calhoon, MEBA president and board chairman of its Pension Fund; Leon Shapiro, national vice president of MEBA and secretary-treasurer of the union's District No. 1; and Jules Bingham, a senior partner of Bingham, Bigotte & Company of New York, shipping agents and brokers. 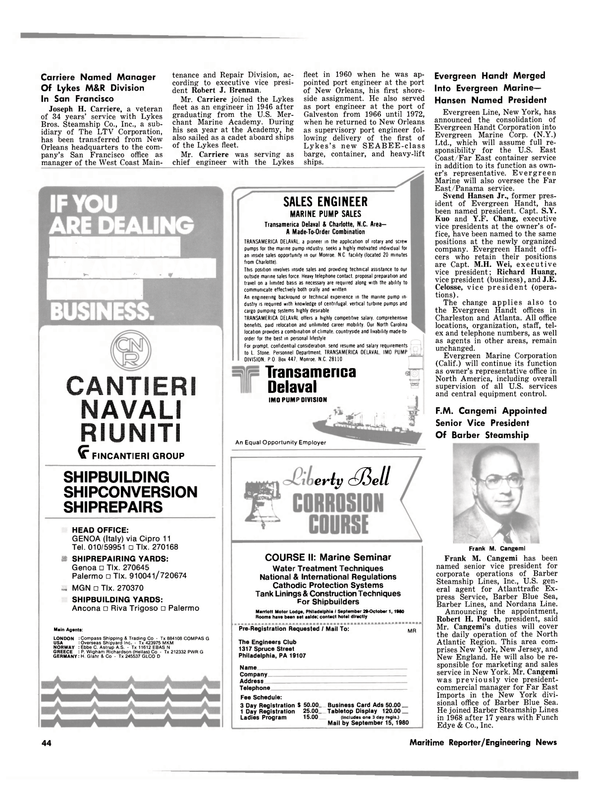