Paul I. Beining, president of CDI Marine Company, has announced the appointment of several new managers in conjunction with a change in organizational structure.

T.P. Reardon is appointed manager, Southeast Region, which consists of offices in Jacksonville, Fla., Charleston, S.C., and Pascagoula, Miss. Mr. Reardon, who joined CDI Marine in 1979 from Tenneco, Inc. (Deepsea Ventures), will continue his duties as manager, Jacksonville office. He was senior engineer with Deepsea Ventures, where he was responsible for the development of highly innovative shipboard equipment to be used for the deep ocean mining of manganese nodules.

J.R. Phillips is appointed manager, Mid-Atlantic Region, which consists of Hampton, Va., and Chesapeake, Va., offices. Mr. Phillips, with Newport News Shipbuilding prior to joining CDI Marine in 1976, will continue as manager, Chesapeake office. Prior to his management assignment with CDI Marine Company, he had extensive experience in piping design and development for various classes of U.S. Navy ships.

Gibson has recently retired from the U.S. Navy with the rank of captain, after a distinguished career covering all areas of management of Navy ship design and maintenance.

CDI Marine Company, a major division of CDI Corporation of Philadelphia, is a prominent supplier of naval architectural and marine engineering services to shipyards, both Navy and commercial, and to their supporting industries. CDI Marine Company has a current work force of over 600 naval architects, marine engineers, designers and draftsmen assigned throughout 10 offices, with headquarters located in Jacksonville, Fla. 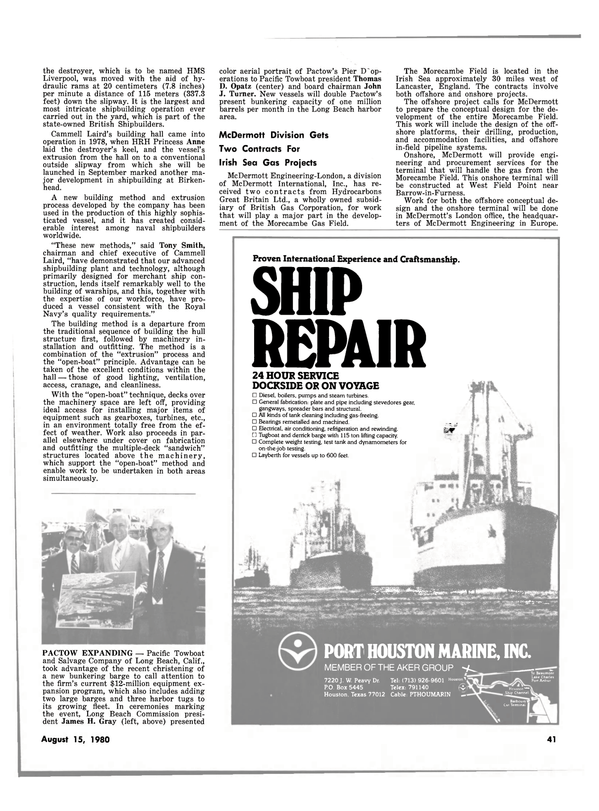