Hitachi Gets Jackup Rig Orders From Danish And Netherlands Owners

Hitachi Zosen of Japan recently received an additional order from J.L. Offshore Drilling A/S, Denmark, for construction of a jackup- type offshore drilling rig. This is the second of two of the same type rig to be built by Hitachi for the Danish company; the first order was received in April this year. The first rig will be named Dan King, the second Dan Duke.

The J.L. Offshore rigs, said to be among the world's largest, are designed for operation under severe weather and rough sea conditions.

They will be capable of operating in water depths of 205 feet, and drilling to 20,000 feet.

The three legs will have an overall length of 343 feet.

The rigs will be classed by the American Bureau of Shipping and have accommodations for a crew of 72. Delivery of the second rig is scheduled for October 1981.

Neddrill B.V. of the Netherlands, an affiliate of Royal Nedlloyd Group, recently placed an order with Hitachi for one cantilever type, jackup offshore drilling rig. This rig, to be classed by Lloyd's Register of Shipping and built to conform with Dutch Government and IMCO regulations, will be capable of drilling to 25,000 feet in water depths up to 164 feet. Delivery is scheduled for December 1981.

Since 1974, Hitachi Zosen has received orders for 14 rigs; seven units have been delivered to date. 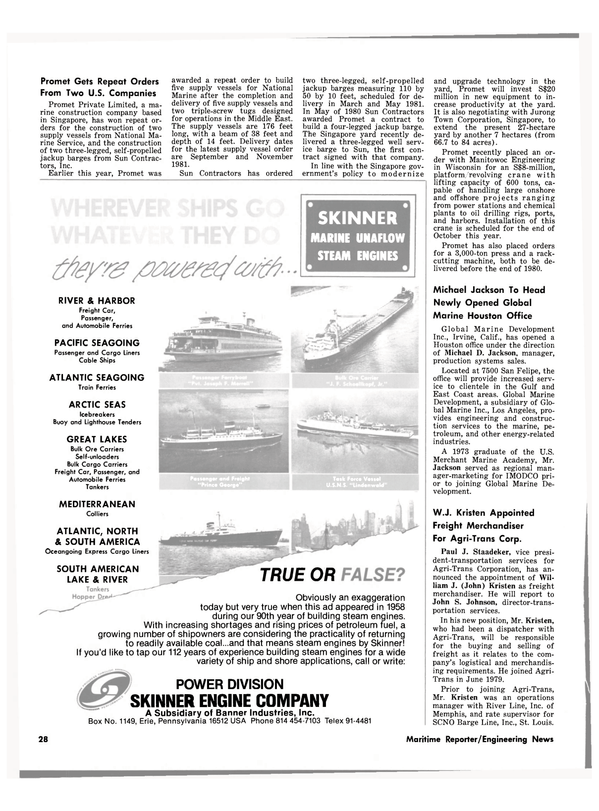