Upper Peninsula Shipbuilding Company (UPSCO), a privately owned firm, was formed in May of 1979 when its president, Charles H. Kerkman, together with Robert J. Rotundo and Robert D.

These studies showed that the integrated t u g / b a r g e concept seemed to offer the most efficient s y s t em in h a n d l i n g cross-lake needs on a shuttle basis. Frequent service on a closely scheduled timetable would smooth the peaks and valleys, and reduce the "dead time" during loading and unloading of cargoes. UPSCO feels that the integrated tug/barge concept is ideally adapted to the needs of cross-lake railroad car shuttle service between Michigan and Wisconsin railhead ports.

The first vessels being built at the new UPSCO yard are part of an integrated tug/barge system for the State of Michigan. The initial contract with the state specifies a system comprising one tug and four barges (forebodies).

Production of the system is now under way, with deliveries planned over the next three years.

The barges will be fully enclosed utilizing Navaire bow doors, and will accommodate 28 railroad cars. The mechanism to connect the tug and barge will be manufactured under license from ACB of France.

UPSCO engaged Breit & Garcia, a New Orleans naval architecture firm with a great deal of experience and an international reputation in the development of integrated tug/barges, to design the complete system.

Construction of the Upper Peninsula Shipbuilding yard began in November 1979. In less than seven months, on June 2, 1980, vessel fabrication was started.

The main fabrication building has an area of 60,000 square feet, with an adjoining five-floor production office building. Module building is carried out under four P&H bridge cranes, each having a span of 125 feet and 70 feet under the hook; two have a capacity of 50 tons and two are 1 5 - t o n cranes. Administration, trades, warehouse, and other support buildings are now under construction, scheduled for completion by the end of this year.

Installation of the latest in steel-treatment, transport, fabrication, and lifting equipment ensures the cost efficiency of UPSCO's operation. Major items of equipment include a Pangborn metal-processing system, the latest computer-automated Linde metal-cutting equipment, a highcapacity Ogden welding line, and a 750-ton Pacific press. Outside lifting will be handled by a Manitowoc model 4100W crawler crane.

One of the major undertakings is the staffing of the company.

UPSCO is building its organization on a scheduled basis, both in the areas of management and hourly employees. Knowledgeable, experienced personnel have been brought into the company in all areas.

In cooperation with the Michigan Department of Labor, employee training schools have been under way for several months.

Total employment during July this year reached 85 people; fullproduction employment level will range between 400 and 450 workers. 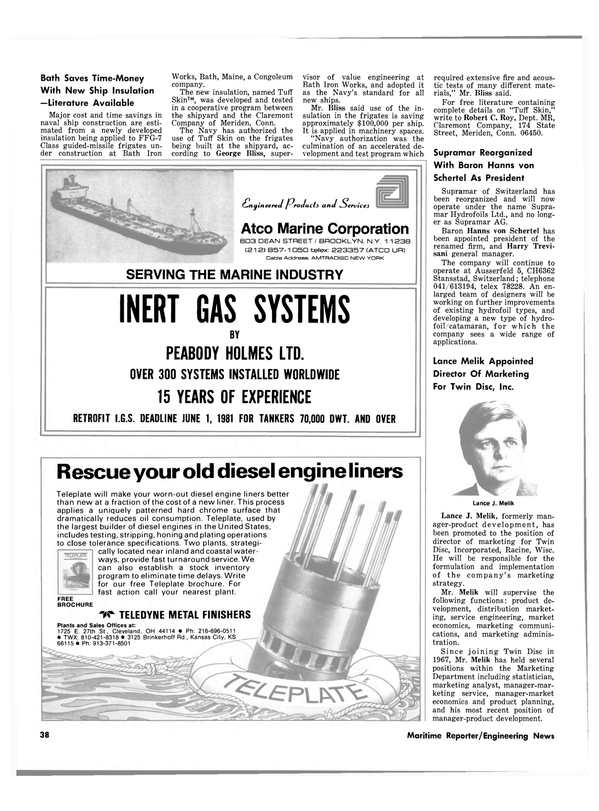