A significant addition to marine safety technology was announced recently by officials of SeaTek Corporation and MCR Technology, Inc. The new device, called the Water Entry System, enables lifeboats to be dropped in a free-fall mode from the deck of a burning or sinking offshore rig or ship.

In making the announcement, SeaTek president Cam Sharr pointed out that in many marine emergencies the conventional system of lowering lifeboats won't work. "There isn't enough time to crank the boats down, or the power to the winches is out, or the boats swing in the wind and crash against the hull," he said. "We hope the Water Entry System will do for sailors and drilling crews what the parachute did for fighter pilots," he added.

The principal component of the system is a lattice keel that can be attached to the bottom of any lifeboat. In the free-fall situation, the keel is the first thing to enter the water, and it cushions the landing of the lifeboat. Also, special bucket seats and harnesses protect the occupants from being thrown against the lifeboat bulkheads and capsule.

The new product has been under development for more than a year, but full-scale prototype tests were completed only recently. In those tests, the Water Entry System was installed on a 44-person Water Survival Craft supplied by Watercraft Corporation. Drops were made up to 60 feet. The tests used the full measurement techniques of the automobile crash tests to determine whether the procedure was safe.

Speaking of the test results, Bob Schwarz, head of MCR's Engineering and Design Department, said, "Even in the drop from 60 feet we should be looking at essentially zero probability of injury for the occupants." Additional confidence was gained from the close correlation of the results in full-scale to the predictions from model tests. In model scale, tests have simulated drops up to 90 feet and conditions of storm seas.

The product has generated a great deal of interest in the offshore drilling industry, which has been stunned by recent sinkings of both a semi-submersible rig and a drill ship, with the loss of all hands in each incident.

For further information and free literature on the Water Entry System, Circle 8 0 on Reader Service Card 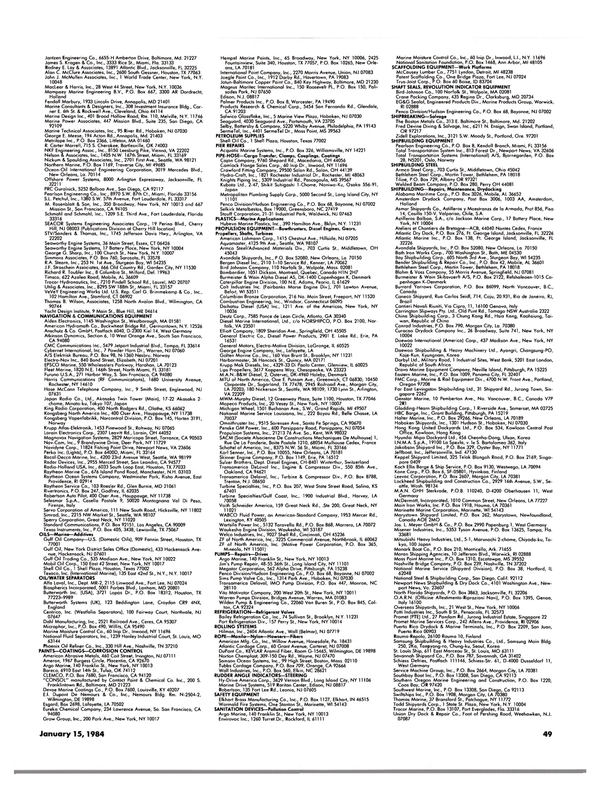