The 500-passenger Landing Queen, a 290-ton displacement sternwheel riverboat, was christened recently at the Landing at Seven Coves, a country club/resort hotel on Lake Conroe, Texas. More than 200 guests attended the ceremony, which was hosted by Wilburn S. (Bill) Bruce, owner of the vessel and the resort. The craft was christened by his wife, Mrs.

The Landing Queen measures 120 feet from bow to sternwheel, has a 38-foot beam, and is 38 feet from her keel to the top of the pilothouse. The boat is said to be one of the largest to navigate any inland lake in the U.S.

The all-steel vessel was constructed by James K. Walker Marine, Inc. of Moss Point, Miss. It was built in modular sections that were then tack-welded together.

After approval by the American Bureau of Shipping it was disassembled and shipped overland by truck to the Landing's site on Lake Conroe, where it was reassembled and permanently welded by Walker craftsmen. Finish carpentry and outfitting were done locally.

The Landing Queen is distinguished from other Paddlewheelers in Texas because she has an authentic riverboat structure, rather than a superstructure built on a barge. Her curvilinear design is dictated by the fore-and-aft sheer and the side-to-side camber of the decks, which is the mark of all true riverboats. The vessel was designed by naval architect William G. Preston, owner and president of Marine Power, Inc., Gulf Breeze, Fla.

The Grand Salon on the Main Deck is enclosed, with year-round Carrier air conditioning. It seats 124 for dinner, features a stage for playS and musical entertainment, and has an antique-style bar. Five brass and cut glass chandeliers, 26 sconces, Encarnex marble, customcut leaded and beveled doors and windows, antique-style floral carpets, and 80,000 linear feet of solid oak moldings and rift-cut raised oak paneling are blended in a rich setting of colors and textures.

The Boiler (second) Deck is covered by the third deck but the sides are open to the lake breezes.

Beneath the elegant Victorian facade, the Landing Queen is as modern as she is beautiful. The vessel is powered by two 18-footdiameter paddlewheels that are independently controlled and fully reversible for maximum maneuverability.

The paddlewheels are driven by two variable-speed hydraulic motors that are powered by two 200-bhp GM Detroit Diesel engines. Each engine drives a 40- kw electric generator, providing 120- or 220-volt power.

The pilothouse, quaint in outward detail, including an authentic 72-inch mahogany riverboat helm, is thoroughly modern inside.

Four television monitors enable the captain to visually supervise the boat from every angle, not only for berthing and getting under way, but for normal cruising as well. Electronic instrumentation keep him constantly advised of wind direction and velocity, barometric pressure, depth of water, and a host of functions related to the operation of the engines and the subsystems that make the Landing Queen one of the safest passenger boats ever built.

Brunch and dinner will be served on daily cruises on the 20-milelong lake. A dockside service building, built out over the water alongside the vessel's berth, will include a complete gourmet kitchen to supply the boat. 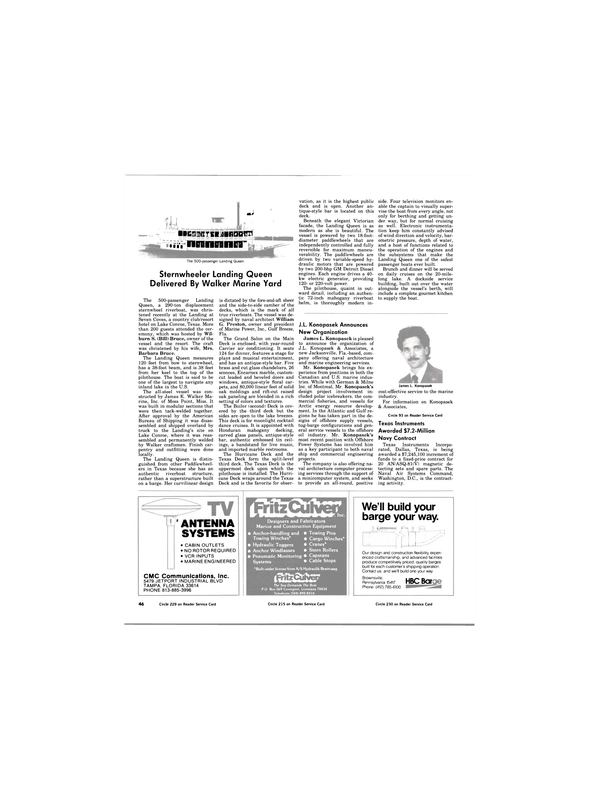