The contract is the largest single award ever received by PBI and is the continuation of the Avenger Class MCM construction program currently under way at the yard.

Peterson Builders, which is the lead shipbuilder for the class, expects to complete the delivery of the three new MCMs by late 1992. The contract also contains a provision for the exercise of up to three additional hulls during the next fiscal year.

The award of these vessel provides PBI with a solid backlog of shipbuilding work which includes four other MCMS in various stages o f c o n s t r u c t i o n . M C M - 3 and M C M - 5 are ready for trials and will be delivered to the Navy shortly.

Other U.S. Navy work under way at the yard includes the completion of a series of 85 twenty-four-foot Harbor Security Boats and the construction of two MK II 50-foot Dive Boats and Diving System Modules.

The 85 harbor boats, built under a contract with options worth about $4.5 million, will be used by the Navy to maintain security at harbors and anchorages worldwide. The 22-knot vessels, each powered by a 165-hp output Volvo Penta outdrive engine, have a beam of 7 feet 7 inches, draft of 5 feet 2 inches and full load displacement of 8,400 pounds.

The 50-foot, steel-hulled MK II Dive Boats, being constructed under a $2.45-million contract, will have a beam of 14 feet 9 inches, draft of 2 feet 9 inches, and full load displacement with a Diving System Module of 83,000 pounds.

The dive boats will be delivered to San Diego, Calif., and Norfolk, Va., and be used to support the U.S.

The new contract also contains options for an additional 16 MK II Dive Boats and Diving System Modules. These options when exercised, would bring the total contract value to $13.2 million.

In the commercial shipbuilding sector, PBI was recently awarded a contract to construct a 100-foot steel ferry for the Washington Island Ferry Lines located in Wisconsin.

The construction of the vessel, which began earlier this year, is expected to be completed in June 1989.

To be named the Washington, the passenger/vehicle ferry is designed by Timothy Graul Marine Design of Sturgeon Bay, Wis. Mr. Graul, a naval architect, will represent the owner as on-site contract representative during the construction phase.

The Washington will be similar in construction to the Robert Noble, a 90-foot passenger/vehicle ferry built by PBI for Washington Island Ferry Line in 1979. 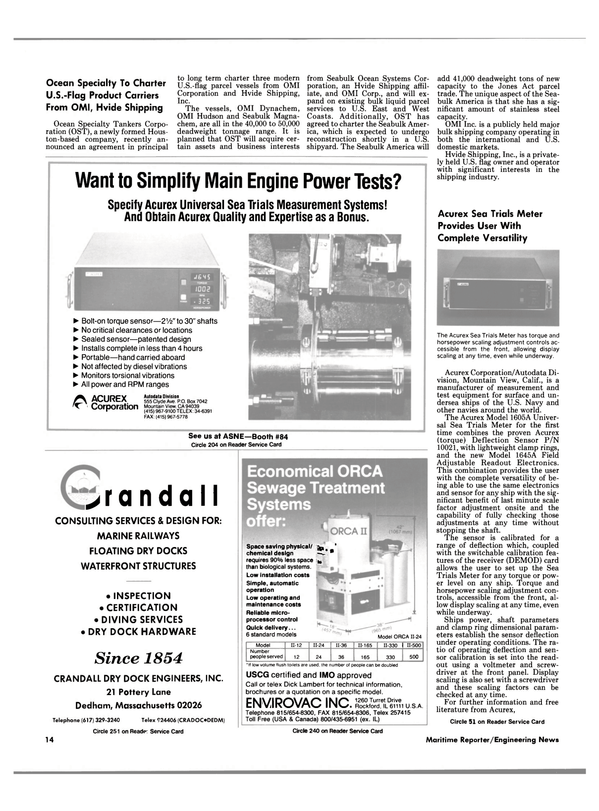