Gdansk Shiprepair Yard Remontowa has expanded its formidable reputation with the completion of two RoRo to cableship conversions. Located in Poland, the yard took on its premiere job within this niche in December 2000 when it converted the vessel Prerow, followed by Lodbrog in January 2001. The sisterships, which measure 459 x 66 ft.

Presently Lodbrog is property of the Danish company, Alcatel Submarine Networks Marine, and Pretow to Luxshipping Co., France. Both vessels will be delivered to the shipowner in October 2001, at which time they will conform their purpose, appearance and names; they will also be adapted to the inspection and repair of underwater telecommunications cables.

The converted vessels will house a special appliance for controlling the tension of the cables laid, their transportation and repair. The shipyard will also install four new electric generators — powered at 9 MW, that will supply (by a distributor of 6.6 kV and 380V) the cables devices and four tunnel thrusters on each vessel, which is an essential component during the dynamic positioning of ships at work.

In addition to installing new living and social quarters onboard, the shipyard plans to add new superstructures and navigation bridges to the vessel, as well as six special cable tanks.

Owned by oil and gas search and exploration company Miliana Shipping Company, the vessel is used for research and geologic work, and drilling and diving.

Gdansk is most noted for its tanker to shuttle tanker conversions. A prime example is the Nordic Project, which the conversion of a tanker into a shuttle tanker designed to collect and transport crude oil, which has been extracted from the North Sea. Norwegian shipowner Knutsen commissioned the 600 x 88 ft.

The majority of the work involved the installation of new BLS loading facilities, as well as a new power plant built with a generator set, which supply the azimuth thruster on the bow. A new pipeline, cable tracks and a pilot's winch were installed, and the vessel's platforms and gears were converted. The tanker, which departed Remontowa during July, is equipped in DPS system meeting the requirements of DP2 class, geared toward stabilizing the vessel in one position during the loading of crude oil on the seas.

The yard has taken on another challenging job with the conversion and lengthening of two vessels, m/v Ask and Urd, both of which are owned by European ferry company Scandlines.

Remontowa will lengthen each vessel, by 66 ft. (20.2 m) each, reconstruct three passenger decks, convert the lower hold into a car deck, and will also install an internal hoistable ramp for weather deck. The vessels, which boast accommodation for passengers will require more than 660 tons each of steel to complete this process. Outfitting, pipe work, electric work and painting will also be completed. Since the main task was the lengthening of the ferry, a special section was prefabricated, weighing 510 tons, and measuring 66 x 66 x 46 ft.

The vessel, which is scheduled to depart from the shipyard in August, will also receive upgraded passenger and crew cabins.

Despite political opposition from the party expected to win general elections next month, state-owned PGNiG is negotiating a 16-year deal with its Norwegian counterpart Statoil, via Norway's gas sales monopoly GFU.

The contract, estimated at about $11 billion over its 16-year life, is for five billion cu. m. of gas annually from 2008. 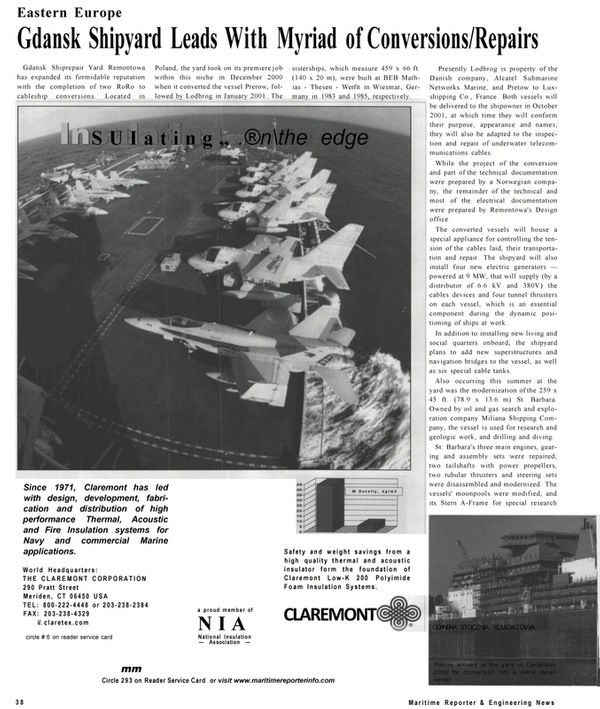