Redundancy The Next Watchword?

The fact that the actual incidence of oil cargo spills as a percentage of global ship- ments is minuscule can never a r e a s o n any relaxation in the constant vigilance and unerring drive for risk minimization which must be practiced in all fields of tanker shipping.

Certainly, there is no evidence of complacency. The industry's continual striving for improvements in vessel and system design, operating procedures, risk management processes and training has a powerful motivator in the increasing, manifold penalties associated with marine pollution.

But professionalism and the striving to meet business objectives in a competitive world tend to be understated as the real drivers of advance, in an era in which oil shipping attracts public and political interest only for the times when things go wrong.

The tanker sector has constantly pushed the technical envelope, adopting innovative thinking to make the transportation of oil and products more efficient and safer. There is no let-up in that process, as evidenced in new breeds of crude carrier and distributive products traders now coming into service where design is underpinned by the perception of an inextricable link between transport efficiency, service dependability, vessel and system reliability, safety and environmental compatibility.

Nonetheless, as has been seen in recent years, major accidents to which environmental damage is attributed can be expected to impact fundamentally on future design, as legislators act in political deference to public outcry.

In a characteristically circumspect address to a recent Intertanko event in Rotterdam*. American Bureau of Shipping's (ABS) Executive Vice President Dr. Don Liu suggested that the next mandatory requirement to be imposed by the rulemakers in response to a casualty producing large-scale pollution could be system redundancy. Dr. Liu said that most of the technological changes over the years in the tanker sector had been developed by the industry, for the industry, in response to market forces. But some were the outcome of regulatory mandate, most notably the wholesale switch to double-hull designs. He cited the Exxon Valdez casualty as providing "a classic example of the manner in which regulators respond to human error".

However, as human factor issues are more intangible for the type of immediate, legislative response to a casualty sought by governments, the rulemakers look for technical solutions, which, it is felt, might better avert future accidents.

In Dr. Liu's view, mandatory redundant systems could be the result of the response by regulators to the next high profile tanker casualty and ensuing pollution, especially if a double-hull tanker is involved.

Models for future designs can already be found, according to Dr. Liu: "They have been taking shape in U.S. shipyards and elsewhere with the first series of tankers, having many of these redundant features delivered to Polar Tankers from Avondale shipyard. So will the next series of tankers for BP from NASSCO, to be followed by the innovative series of shuttle tankers for Conoco." While many of the projects have been driven by oil majors. Concordia Maritime's V-Max series of VLCCs (very large crude carriers) was referred to as an example of innovative thinking on the part of the shipowning community.

"If the case of the Amoco Cadiz were to occur today, there is no doubt in my mind that redundant system legislation would follow almost immediately." considered Dr. Liu. He felt that mandatory introduction of such requirements would have an equally disruptive effect on the industry as the double-hull stipulations, with the fundamental difference in the nature of implementation. The doublehull process started with U.S. unilateral action in the shape of OPA 90, and continued a decade later with unilateral action on the part of the European Union, in the aftermath of the Erika disaster.

With the redundant system approach, Don Liu considers that it will be worked out within IMO and will impact the global fleet from the outset. 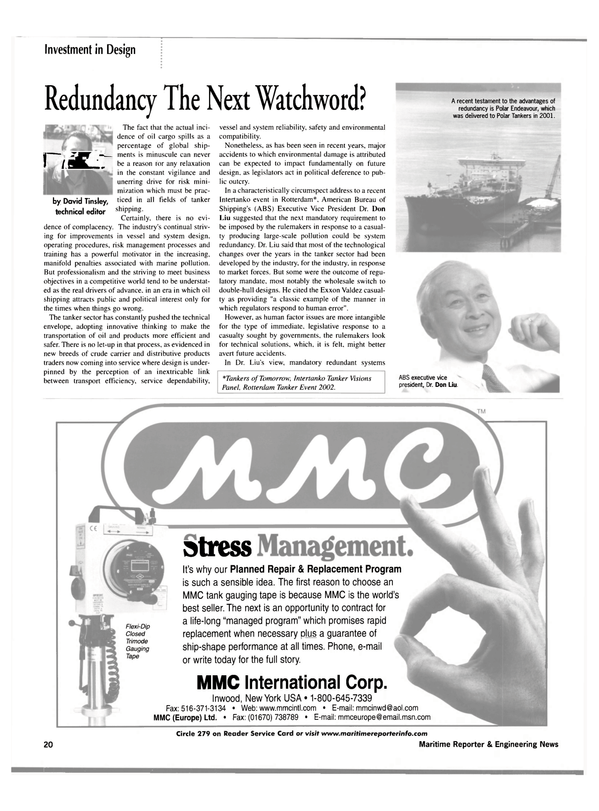 Read Redundancy The Next Watchword? in Pdf, Flash or Html5 edition of June 2002 Maritime Reporter