Challenger to the Last Steam Bastion

Over the years, a succession of alternatives to steam turbine propulsion for large LNG carriers has been rolled-out by the mar ne engineering industry.

Nonetheless, the steam turbine has continued to reign supreme for four decades, since the start of large-scale LNG transportation by sea, in what now constitutes its last bastion in the commercial vessel sector. This achievement is a reflection of the performance and proven attributes of such plant, rather than an indictment of alternative solutions.

For sure, one of the steam turbine's most valued qualities is its reliability, with all which that implies for service dependability, ship productivity and safety.

Another is the facility, which it offers for burning liquefied cargo boil-off as readily as fuel oil.

However, the recent completion of factory acceptance tests in Finland for a dual-fuel engine derived from one of the most popular, wide-bore medium-speed diesels, denotes a new willingness within the user community to depart f r om the e s t a b l i s h e d technical order. Whether or not the adoption by Gaz de France of an electric propulsion system, using dual-fuel engined generating sets, will usher in a new era in LNG carrier powering remains to be seen.

What is certain is that the in-service behavior of the plant, once the recipient 74,000-cu. m. newbuild is commissioned in 2004, will be closely watched by an industry keen to realize efficiencies through the transport chain.

The diesel-electric package nominated by Gaz de France for the newbuild at Chantiers de l'Atlantique will reportedly offer a propulsive efficiency of at least 40-percent, compared to around 30-percent for steam turbine drive.

Four gensets incorporating Wartsila 6L50DF dual-fuel engines developing 5,700-kW apiece will cover all propulsion and shipboard electrical power needs. As well as being the first LNG carrier with electric propulsion, the French ship will be among the few to have internal combustion engines rather than steam turbine plant.

The Wartsila 50DF engines can be run either in gas mode or liquid fuel mode, with provision for automatic switchover from gas to marine diesel oil in the event of an interruption in the gas supply, while continuing to deliver full power.

Significantly, gas fuel is fed to the engines at a low pressure, less than five bar. In gas mode, natural cargo boil-off would be supplemented by forced boiloff to provide the requisite power.

Wartsila claims that the maximized use of boil-off coupled with the high efficiency of the DF-series engine makes for significantly lower, overall fuel consumption relative to a conventional steam turbine installation of comparable power. In addition, the Finnish group cites lower emissions of Nox (oxides of nitrogen) and C 0 2 (carbon dioxide) in favor of its powering solution. It is keen to take the concept further, into the category of the vessels of 130,000-cu.m.- plus, the size which typifies the modern generation of deepsea LNG carrier. 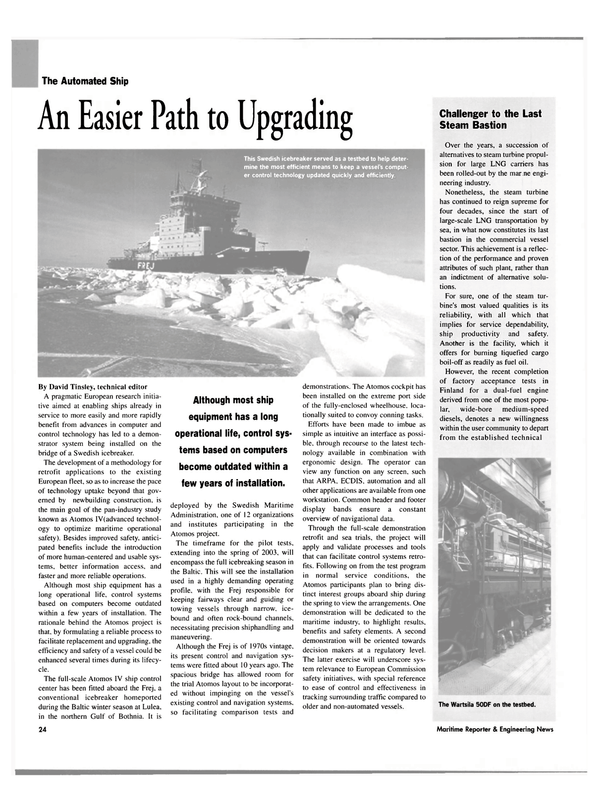