IZAR Shows Its Mettle in the Gas Sector

As the sole shipbuilding organization outside eastern Asia with a current involvement in the construction of large LNG carriers, IZAR is determined to maintain a long-term position in a promising, higher value-added field of the newbuild market.

The present business profile is based on a series of membrane-type vessels of 138,000-cu. m. capacity, contracted in recent years in the face of fierce international competition and oriental domination of gas tanker production. However, the gathering momentum behind the Spanish group's research and development drive has increased its offering to the LNG transportation sector beyond the impressive new generation of ships now taking form in Sestao and Puerto Real for Spanish and Norwegian interests.

Responsiveness to clients' requirements is complemented by a growing propensity for technological and design innovation. The five newbuilds in hand for delivery through 2003 and 2004 encapsulate the latest derivatives of well-proven cargo containment and steam turbine propulsion systems, beloved of a characteristically conservative LNG shipping sector. At the same time, IZAR's readiness to explore and embrace new solutions in cryogenic tanker engineering and powering is expressed in its proposal for a twinscrew diesel LNGC of 148,000-cu. m.

capacity. In the offshore domain, it has logged a breakthrough order for a floating gas liquefaction plant, and put forward concepts for floating GTL (gas-toliquids) production units.

Contracts for five ships in quick succession restored a Spanish industrial presence in LNG tanker construction, the previous such delivery having been that of the 40,000-cu. m Laieta from the former Astano yard at El Ferrol in 1970.

The program fits well with IZAR's technical capabilities, shipbuilding resources and strategic intent. Prospects for global tonnage demand are encouraging, buoyed by the sustained, worldwide increase in natural gas usage, which is now reckoned to account for nearly a quarter of total primary energy consumption.

m. LNG carriers were signed by Astilleros Espanoles, just before the creation of IZAR through the merger with Empresa Nacional Bazan. Respective contractual owners Naviera F. Tapias, Knutsen OAS Shipping in co-operation with Marpetrol, and Naviera Elcano, all proceeded on the strength of long-term charters with Repsol. The series was quickly extended to five, through a further order from Knutsen, backed by a charter to Spanish electricity producer Union Fenosa, and an additional ship for Tapias, with another charter commitment from Repsol. Three newbuilds were assigned to the Sestao yard in Bilbao, where the series-leader Inigo Tapias is approaching completion. The two other vessels were allocated to the showcase Puerto Real yard, near Cadiz.

The LNGC newbuilds are somewhat longer and narrower than comparable vessels, due to the physical constraints imposed by the riverside premises of the Sestao yard, resulting in a leaner form favoring the speed and fuel consumption relationship. At 139 ft. (42.5-m) breadth, the vessels have been built to the maximum width permissible at Sestao, and also to the maximum design draft of 37 ft. (11.4 m). At 933 ft. (284.4 m), the ensuing length increase relative to Asian-built tonnage of comparable cargo volume is in the order of 33 ft. (10 m), against a reduction of just under 3 ft.

Each vessel features double-hull protection of the fuel tank spaces. Although there is no mandatory requirement for such arrangements, the initiative reduces the risk of spillage from the substantial fuel oil tankage amounting to nearly 8,000-cu. m., in the event of a casualty.

The unusually high bunker volume, combined with a promised fuel consumption of about 165-tons per day, in a laden state, confers a range of 20,000- nautical miles, in excess of typical LNG tankers. Steam turbine propulsion, overwhelmingly the system of choice for large LNG carriers during the past four decades, has been selected for the newbuilds booked with IZAR. In each case, the installation is founded on a Kawasaki steam turbine producing 28,000-kW of power, drawing on two Mitsubishi main boilers of 65,000 kg/hr.

output, to ensure a service speed of 19.5- knots. Adoption of GTT's N096E membrane containment design, the most recently installed marine LNG containment technology in Europe, is claimed to have offered a more compact solution than the various alternatives for the given cargo volume. This is said to have resulted in a lower gt, and a reduced power requirement for transporting the same volume of LNG. Production and construction considerations were no less apposite to the decision to use a membrane system, which obviates the need for equipment to lift the huge pieces entailed in spherical tank construction.

By employing a single type of system throughout the five-ship newbuild program, rather than using different containment technologies for the series, IZAR has been able to realize lower unit production costs.

The membrane design comprises four prismatic cargo tanks. The system has very specific deformation and fatigue requirements that impose supporting structural design constraints that must be taken into account at the outset.

Lloyd's Register's ShipRight procedures were accordingly applied at the design stage to help reduce the risk of structural failure. The project specified a fatigue life of not less than 40 years for all connections in way of the cargo tanks.

A measure of IZAR's commitment to the sector may be gauged from the considerable investments made at both Sestao and Puerto Real to imbue the yards with the requisite equipment, skills and production infrastructure for the construction and engineering of LNG carriers. Mock-ups were prepared of the cargo containment arrangements to familiarize personnel with the specialist build and installation process, in addition to the technical assistance provided by French membrane system designer Gaz Transport & Technigaz (GTT). Diversified Sestao has played a signal role in the development of a leading international position by the Spanish state-owned shipbuilding group in the market for shuttle tankers, and has also helped foster business in other demanding areas such as chemical tankers, containerships and large dredgers. The yard's reputation for prompt delivery can only have assisted IZAR in its bid to attract LNG carrier business. The distribution of the current LNG tanker program between Sestao and Puerto Real, acting in full co-operation, illustrates IZAR's endeavors to maximize the potential offered by its multi-yard network by acting in a more integrated and co-ordinated manner.

Considerations of long-term operating economy, as well as maneuverability and redundancy, favored the nomination of a diesel propulsion plant, comprising a pair of two-stroke engines driving twin propellers. The main engines will be housed in separate machinery rooms.

Boil-off gas produced by the LNG cargo on passage would be put through a reliquefaction unit, to be compressed and re-injected into the cargo tanks. In this way, the ship's main machinery would be fed entirely on heavy fuel oil, rather than being partially fueled by LNG boil-off, thereby resulting in the final delivery at the discharge terminal of more of the high-value cargo. The arrangements mean that the propulsion installation would burn the cheapest consumable available today, namely heavy fuel oil, and that delivered LNG shipment volumes would be higher. Full redundancy would also be built into the reliquefaction system, so as to better ensure overall operating dependability and availability.

The Sestao shipyard, which took the lead research and technical role in the current program of five LNG carriers, has undertaken research in relation to many of the facets of the envisioned 148,000-cu. m. type, including the preparation of model reliquefaction plants. Astillero Sestao has been involved in researching different technologies for LNG vaporization and investigating the suitability of each for installation above-deck.

In an earlier exercise, MAN B&W calculated that an operating benefit equivalent to approximately $2-million to $3- million/yr. would be feasible using diesel engine propulsion technology and a state-of-the-art gas reliquefaction installation, compared with steam turbine propulsion, for a vessel similar in size to that contemplated by IZAR.

As a step up from membrane systems supplied to date, the new CSI arrangements written into the draft design for a 148,000-cu. m. tanker combines the best features of the proven Mklll and N096 systems developed by the legacy companies vested in Gaz Transport & Technigaz (GTT).

Through its ship repair division, IZAR has gained substantial experience in the repair and rehabilitation of LNG tankers, and the group's capabilities in this direction give it the scope to offer long-term support to the owners and operators of the vessels, which it is now building. All five LNG carriers will be engaged in the Spanish import trade.

The twinned facilities of Carenas Ferrol and Carenas Fene, a repair arm of the former AESA Astano shipyard, are approved as a repair center for GTT cargo containment systems. Agreements are also in place with various specialist subcontractors and equipment manufacturers in the marine LNG field.

Building on the group's well-developed business links with the Norwegian shipowning and offshore communities, IZAR has broadened its activities in the marine LNG field by attracting a contract for a floating gas processing plant.

The unit has been designed to withstand the rigors of offshore duty in the Barents Sea, close to Melkoya Island, off northern Norway.

Scheduled for completion in August 2003, the LNG barge has been ordered by the Norwegian state-owned energy group Statoil for use on the Snohvit field. Specified to main dimensions of 505 x 177 x 29 ft. (154 x 54 x 9 m), the barge will house about 24,000-tons of equipment to convert natural gas into liquefied form. The project has been assigned to IZAR Fene shipyard, a specialist since 1987 in offshore unit design, engineering and construction.

The unit will have a steelweight of some 8,500-tons.

It is anticipated that around 70 cargoes of LNG will be shipped each year from the floating liquefaction plant, which is part of Statoil's ambitious program to develop offshore natural gas resources from the Albatross, Askeladden and Snohvit fields, not far from Hammerfest.

Snohvit alone has recoverable reserves of 193-million cu. m. of gas and 113- million barrels of condensate, and is due to start production in 2006.

An issue of IZAR's participation in joint industry research endeavors is a proposal for floating plant incorporating gas-to-liquids (GTL) technology to extract and convert gas from marginal or remote offshore fields into premium grade liquid products.

While specialist process companies are addressing the challenges of 'marinizing' GTL systems used ashore, IZAR has been studying the technical and design needs of a floating structure supporting such plant, exposed to various, difficult sea and weather scenarios.

The extensive experience of the Spanish group's Fene yard in constructing FPSO (floating production, storage and offloading) units has been brought to bear on the latest studies.

One proposal centers on a 1,148 x 328-ft. (350 x 100-m) design concept, known as the Ultra Large Floating production System (ULPS), intended as a 'compact' solution for the production and storage of large volumes of both GTL and oil products, for transfer to shuttle tankers. The ULPS could be accommodated in the Fene yard's building berth. A second, innovative concept under investigation by IZAR Fene is a combined FPSO (CFPSO). This would comprise two 'standard' size FPSO units connected by means of an articulated arm, and each devoted to similar or separate process functions, be GTL or crude oil. IZAR broad-based resourcing for research and development, across the range of technologies spanned by its target markets, underscores its long-term approach to the business, and the conviction that such a commitment is crucial to ultimate commercial success. 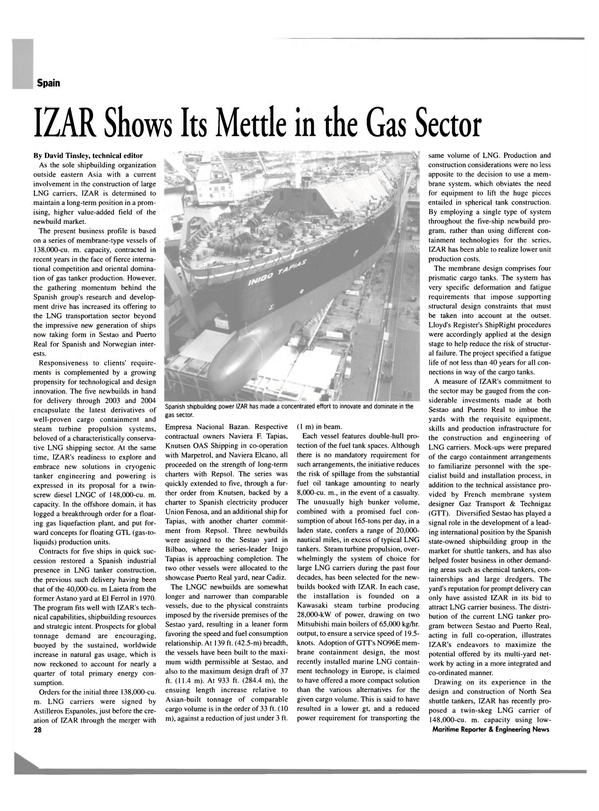 Read IZAR Shows Its Mettle in the Gas Sector in Pdf, Flash or Html5 edition of March 2003 Maritime Reporter