Ministry With A Mission

Formerly headed by the Rev. Canon Peter Larom, the organization will continue to flourish on the foundation that Rev. Canon Larom instilled with new leadership by an experienced leader, who also happens to be the first woman to hold such a position at SCI Since grabbing the headlines more than one year ago with its highly praised relief effort in wake of the 9/1 I terrorist attacks, SCI remains at the forefront of the international maritime industry as an organization that lends a helping hand to those in need. Whether it is providing comfort and prayer (via its International Seafarers' Center) to a merchant mariner, who has lost his connections to his faith and family; providing training to inland mariners at its Center for Maritime Education in Paducah, Ky.: or fighting for the rights of Seafarers' around the globe, through its Center for Seafarers' Rights group. SCI is ubiquitous in the maritime industry. With those roots and foundations firmly planted by the organization's former Executive Director, Rev. Canon Peter Larom, (who will continue to function as a special adviser to the institute), SCI is ready to move into the next chapter of development through its new leader. Rev. Dr.

Jean Smith, who is no stranger to the organization or what ingredients are needed to formulate the recipe for successful leadership. Prior to assuming her current position, she served the Institute in various capacities, beginning in 1990 with her appointment as the Director of SCI's International Seafarer's Center in Port Newark, N.J. With her appointment as executive director of SCI, which commenced on January 1, 2003, Rev. Dr.

Smith was an obvious choice, due to her current connections and contributions to the Institute. "Jean's [Rev. Dr. Smith's] proven leadership over the past 13 years will allow us to maintain our missions and respond to increasingly challenging times," said George D. Benjamin, head of SCI's Board.

Ironic Beginnings Rev. Dr. Smith takes the reigns at SCI during a particularly critical juncture, as a delicate balancing act between seafarer's rights and national security is being waged. Perhaps Rev. Dr. Smith identifies so well with the inner-workings of her position because she too, once felt like an outsider in a foreign land, as so many merchant mariners do when they travel on the high seas. Rev. Dr. Smith, along with her husband Peter, raised two children in places such as Paris and Tokyo, sometimes spending as much as three years in a country where she. nor her family did not speak the language or were familiar with the culture. "My children grew up in foreign lands," Rev. Dr.

Smith said. "I can identify with merchant mariners because I know what is like to be an outsider." Living in Tokyo for three years before the Smith family moved on to Paris, Rev. Dr. Smith embraced this challenge by figuring out ways to overcome this obstacle. "When we first moved there (Tokyo), obviously I did not arrive there speaking any Japanese. I had so many concerns. How am I going to relate to people... Or as a young mother with children. I thought about safety concerns such as what if I needed a doctor or hospital when there's both a language and cultural barrier.

As time passed and Rev. Dr. Smith had begun to familiarize herself as best she could to feel a sense of "belonging," she discovered that the answer was a simple one. "The wonderful message that I figured out over time, was yes, there are those barriers, but with effort we can overcome them," she said.

Rev. Dr. Smith's revelation not only helped her personally with her struggles to blend into a foreign county, but carried over into professional life as well when she was hired by SCI as the Director of its International Seafarers' Center in Port Newark, supervising chaplains and ship visitors. She discovered that when working with her staff to ensure that merchant mariners who visited the Center were made to feel welcome and comfortable that they too felt the same language and cultural obstacles that she had experienced years before.

"When I would visit ships, I would realized that they (merchant mariners) are not only strangers when they walk off the gangway of the ship to go somewhere, but even on the vessel they experience these same feelings," she said.

"Dealing with so many different nationalities, cultures and languages - for sometimes a year at a time can be an isolating and lonely experience for someone.

That is why a sense of belonging or community is one that we at SCI try to instill." The Road To Success Raised on a farm in the small town of Farmington, Mo., the former Jean Reinhart was the youngest of three girls born to John B. and Betsy Reinhart; Rev.

Dr. Smith had a sampling of hard work and dedication through the efforts of both her parents from a young age. With her father going on to build what was then the largest manufacturing company of infant shoes, and her mother raising a family and keeping both a farm and household moving swiftly. Rev. Dr.

Smith's entrepreneurial spirit and appreciation for hard work is no accident. In fact, she can recall coming to New York City as a young girl on business trips with her father, whose company. Trim Foot Shoes, made the well-known boots for the Mouseketeers who appeared on the popular Mickey Mouse Club Show.

Grabbed by her father's passion for success and the ability to meet his goals, Rev. Dr. Smith felt a connection to this way of thinking. "I thought, this (my father's company) is a huge success," she said. "I was intrigued by his ability to not only have a goal — but a passion to grow it. He was a good role model, and most importantly, he believed in himself." After graduating high school, Rev. Dr.

Smith left the small, farming community where she was raised for metro- Chicago, where she went on to attend Northwestern University, graduating with a B.S. degree in Speech Therapy.

Following her marriage to Peter Smith, the births of her two children, and six years spent living abroad. Rev.

Dr. Smith and her family returned to the U.S.. at which time she began to reconnect with her Episcopal Faith. Realizing this newfound connection, in 1977. Rev.

Dr. Smith enrolled at the Church Divinity School of the Pacific (CDSP) in Berkeley, Calif., where she was encouraged to seek ordination as an Episcopal Minister. Raised as a "Cradle Episcopalian" (from birth). Rev. Dr.

Smith admits that she always sensed a desire to pursue the Episcopal ministry as her vocation, but felt frustrated, as it could not be realized. The Episcopal Church did not permit women to ordination until 1977, and luckily Rev. Dr.

Smith was still eligible to attend seminary to prepare for the ordination process. "I had sensed a vocation, which could not be realized," she said.

"Therefore I felt the way anyone who does not have equal opportunity feels...frustrated. How fortunate I was though that I was at an age (in 1977) where I could still attend seminary and that I was accepted." Following the completion of her studies at CDSP, Rev. Dr. Smith was ordained by Bishop G.P. Mellick Belshaw of New Jersey as an Episcopal Minister, where she began her parish work in 1980 at Trinity Church in Princeton, N.J., eventually going on to serve as Interim Rector.

After 10 years as the head of this community church, Rev. Dr. Smith accepted the position at SCI as director of the International Seafarers' Center.

Her successful command led to the installation of the Institute's International Training for Workplace Ministry (ITIC), which was formed in 1995 to train and educate port chaplains who service under-served ports around the globe. Three years later, Rev. Dr.

Smith not only created the pastoral service organization known as Ministry on the River, but received a M.Div and Doctorate degree from CDSP as well.

It was ultimately her various functions and implementation of programs that undoubtedly led to Rev. Dr. Smith's appointment as the Institute's Managing Director in March 1999. "SCI was my initial introduction to the industry," she said. "I have been very fortunate to have held different positions in an organization that has allowed me to know how sister organizations operate, as well as the shipping companies, agents, freight forwarders. So Although it's a new position, I'm not starting cold." Rev. Dr. Jean Smith, will have the added task of dealing with the effects of the economic downturn in lower Manhattan, (where SCI is located), since the tragedy of 9/11. While there does not seem to be any relief in the downward spiral of the current economic state, Rev. Dr. Smith and her staff have already begun to tackle the issue by exploring alternative options. "The market is down for everyone," she said.

"And I think that not-for-profits across the board are looking at limits. It only means that we have to work harder at being innovative and be willing to partner with sister organizations." And as the new Executive Director of the SCI, Rev Dr. Smith's mission statement is simple...to have a vision.

"Having a vision empowers people," she said. "Expecting and realizing visions are of enormous value as well, and I feel fortunate to be able to lead a group of very skilled people who work to instill that vision." 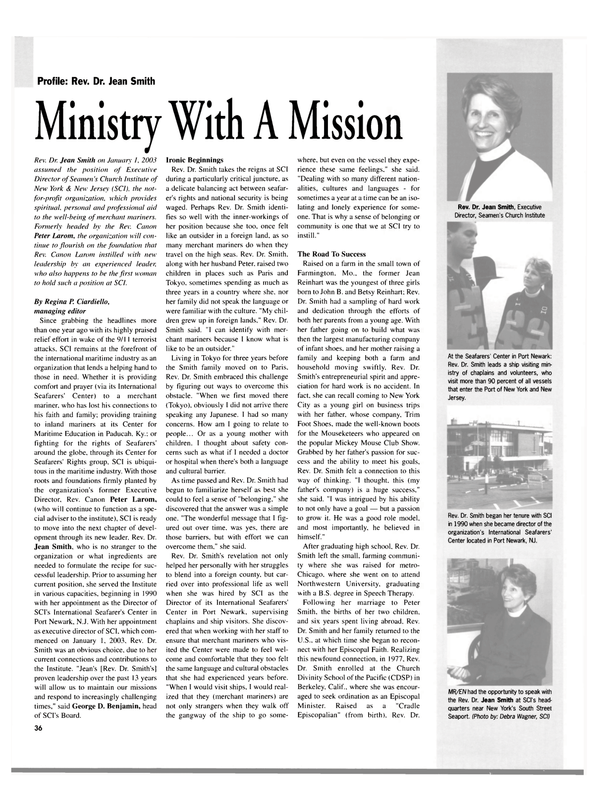 Read Ministry With A Mission in Pdf, Flash or Html5 edition of March 2003 Maritime Reporter