Recently, the use of certain environmental-friendly waxes or "semi-hard coatings", used by barge fabricators to protect the internal void walls and floors of marine double-hulled steel barges from corrosion, have fallen under scrutiny by some barge owners/operators.

It is believed that certain paraffin wax coatings act as a food source for certain living corrosive microorganisms.

These single-celled organisms are associated with a phenomenon known as Microbiologically Influenced Corrosion (MIC) that can cause localized pitting and eventually leaks in steel barge voids. This following examines the biological and chemical research that has recently been performed on the Jotun Paints, Inc. "beeswax" coating by two independent laboratories.

The research confirms that the wax coating is of the highest quality, effectively mitigates corrosion, and does not introduce nor promote the growth of microorganisms when properly applied in barge voids.

Allegations that beeswax coatings support MIC in barge voids must be with regard to other hydrocarbon type waxes.

The void space between the outer and inner walls of double hull barges used to carry various cargos (i.e..

The voids in barge compartments are accessible by opening sealed watertight hatches and climbing down fore and aft ladders for periodic floor and wall integrity inspections. Voids should be kept clean and dry.

They are not recommended for use as ballast tanks during cargo loading and unloading operations. To help control corrosion, barge fabricators often apply coatings such as waxes, alkyds. vinyls, and epoxies to the cleaned, prepared metal surfaces in voids. Recently, some barge owners/operators have charged wax coatings applied in barge voids as being a food source for microorganisms and with the rampant spread of these bacteria associated with MIC. However, a certain wax coating composed primarily of "beeswax" has been researched by several highly regarded independent U.S. laboratories and found to be sterile of microorganisms in the virgin state and not susceptible to microbial degradation in barge voids.

Mechanisms of MIC Microbiologically Influenced Corrosion (MIC), also known as biological or bio-corrosion, refers to corrosion that is initiated or accelerated by microorganisms.

It is commonly known that microorganisms (tiny onecelled organisms such as bacteria, fungi, and diatoms - unicellular alaae) are found living in almost every aqueous environment on earth. MIC is caused by a few specific genera of microorganisms that attach to a firm steel surface to feed on and metabolize selective nutrients and other elements found in most types of water environments, to fulfill their life cycles.

no water, no MIC, no corrosion. A food source and specific environments can enhance the growth of microbes. The instant a metallic surface is immersed in water, a microbial mass or biofilm begins to form.

However, this does not mean that all species in the biofilm are directly or indirectly corrosive to steel.

Several types of microorganisms can play a role in MIC, but many do not. Free-swimming microbes (planktonic) float freely in the water medium and are not considered harmful to steel. On the other hand, when certain free-floating microbial cells attach to the steel surface and become sessile at specific metal receptor sites or inclusions, the initiation of a tubercule or nodule on the steel surface can be seen. Localized pitting or the MIC phenomenon occurs under the nodules.

One of the most effective means of controlling MIC and the pitting of steel in barge voids is through the use of barrier coatings. The Jotun void wax is a barrier coating, that when applied in dry barge voids, has been a very good barrier and "first line of defense" in preventing general corrosion, bacterial, fungal and viral propagation and MIC. Natural substances found in this unique coating actually ward off microorganisms.

Beeswax and Propolis A primary component of the Jotun void coating is beeswax. Beeswax is a tough wax (ester) formed from a mixture of several compounds secreted by honeybees.

In conjunction with the beeswax and honey, propolis is another one of the great products the bees produce. It is a resinous substance that the bees gather from tree leaves and bark, and combine it with nectar, beeswax, pollen, and bee bread to make a natural "glue" type substance. This glue is used to seal hive cracks and holes. It is also placed at the entrance to the beehive, where incoming workers have to brush up against it as they enter the hive. This sterilizes the bees from infection, and may disinfect them upon entry as well. Propolis is also used to line the wax birthing chamber where the queen lays her eggs, thereby providing a clean, sterile environment for the developing eggs. Researchers have found that propolis contains all the known vitamins except for vitamin K. Of all the 14 minerals the human body requires for normal function, propolis contains all but one, sulfur. It contains a number of unidentifiable compounds that create a perfectly balanced food substance. It also is composed of 16 amino acids that have been identified, and more bioflavanoids (necessary for anti-inflammatory action within the human body) than found in oranges. The propolis found in beeswax is antibacterial, antiviral, antioxidant, antifungal, and anti-inflammatory. The Jotun beeswax has had a similar "no growth" effect on microorganisms found in barge voids when tested by various independent laboratories.

(91.4-m) fuel oil transport barge was suspected by the barge owner/operator of having bacterial corrosion and had its steel voids inspected by qualified personnel for MIC. The voids had been coated with a 2-ml layer of the Jotun beeswax by the barge fabricator during construction. The void inspection found the wax coating well bonded, mostly intact and performing well with many of the barge voids holding stagnant water, as well as. organic and corrosion deposits. Void bottom samples were collected in the barge at several areas, where the wax coating was damaged and where active corrosion pitting resembling that of MIC was identified.

Corrosion deposits in pits were tested onsite for iron sulfide (usually associated with the most harmful sulfate reducing bacteria, SRBs). Testing was negative for FeS. Void composite samples containing viable microorganism cultures from the barge were sent to a professional independent laboratory in Texas for culturing and further beeswax coating-related investigations. Several other beeswax-coated barges suspected to have suffered MIC and contracted by the same owner/operator had voids inspected in the same time period.

Stagnant water was standing in many of the barge voids. General corrosion was observed and documented at wax-damaged areas. Visual, biological and chemical tests of suspected areas revealed MIC was not occurring in these barges.

Lab Test Results A five gallon sample of the virgin beeswax coating gotten off the shelf of a Jotun coating's distributor was sent to the Texas laboratory for bacterial contamination and growth-inducing studies.

This indicated that the beeswax coating used to paint the void spaces did not introduce microorganisms that induced the corrosion observed during inspections.

Laboratory culturing on six selective media showed that all of the organisms collected in the MIC kits from the barge were environmental fauna, most likely introduced through the use of the void spaces as a ballast tank. The most widely recovered organisms were three kinds of slime formers that are believed to be relatively innocuous (from a corrosion perspective) by themselves. Also recovered in two subcultures (out of 27 total) was an acid producing bacteria (APB), known to accelerate corrosion through the metabolic production of organic acids. The APBs were only recovered from one location in the barge. APBs are usually associated with sulfate reducing bacteria (SRBs) that are well recognized to cause MIC. however, no SRBs were recovered.

A fungus was also recovered in one case and has been taxonomically identified as Fusarium oxysporum.

This fungus is also an environmental organism and is most often associated with soils and muds. Finding this fungus in the void space lends additional evidence that the most likely source for the organisms is the use of the void space as a ballast tank. Thus, when the void is filled with water, some of that water will have entrained silt, soil, and mud that then carries the fungus.

Microorganisms were cultured from the positive MIC kit vials and all beeswax growth determinations were performed under aerobic and anaerobic conditions while cultures were in the log phase of growth. Nutrient testing involved testing in triplicate the lotun beeswax in autoclaved and buffered basil salts solutions.

The coating was thoroughly mixed using a mechanical mixer and introduced into the three sterile containers at concentrations of 50, 250 and 500 ppm and controls were run. Aseptic transfers were made to aerobic and anaerobically incubated glass tubes. A paraffin wax control test was also set up.

All negative controls remained negative throughout the test period. Results of extensive aerobic and anaerobic culturing showed that no microorganisms were noted in the virgin Jotun beeswax coating and no microorganisms grew on media containing the beeswax.

The average carbon chain length for the virgin wax coating samples that had been inoculated in triplicate, with controls, with bacteria from the MIC kits and incubated for over 60 days was determined using ASTM D2887. The average boiling point for each sample was then compared to a standard calibration curve that establishes the relationship between boiling point and hydrocarbon chain length. The results clearly showed no appreciable difference between the virgin and inoculated beeswax samples. If the microbes were able to use the wax coating or any of its components as a nutrient source, the average boiling point and thus the chain length would decrease. As there was essentially no difference in the boiling points for the samples, it can be further concluded that the microbes did not use the beeswax coating as a nutrient 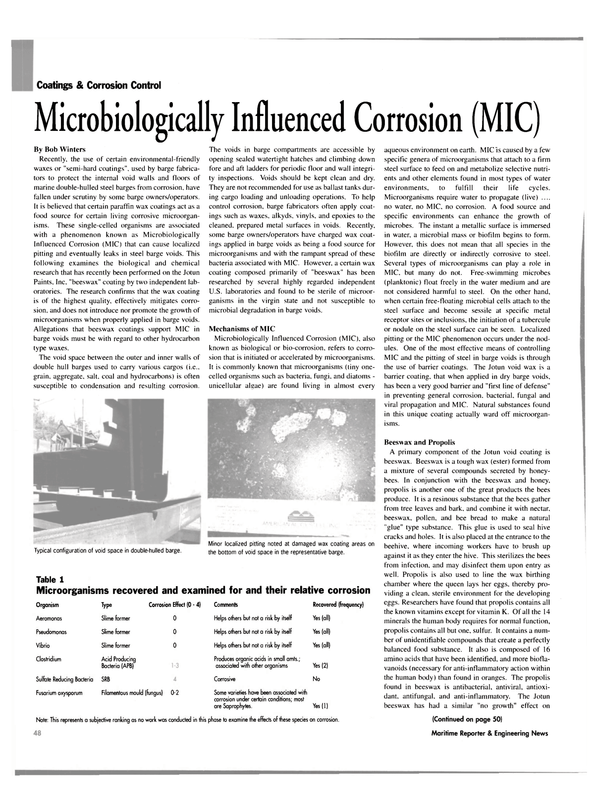