Announced in June 2011, Bourbon and CGG entered a five-year charter agreement for a series of six custom newbuild seismic support vessels. Now more than two years later, the third ship in the series, Bourbon Gannet, is due to enter service in the early part of 2014, following the launch of the first two vessels, Bourbon Petrel and Bourbon Fulmar, in summer and autumn 2013, respectively. The remaining three sister vessels are under construction in Dubai’s Grandweld Shipyard, also slated for launch in 2014.
The six Bourbon ships were engineered by naval architecture company Offshore Ship Designers to assist CGG’s offshore seismic operations. The Cyprus-flagged, 53-m vessels boast 50-metric-ton bollard pull capabilities and are designed for following tasks: personnel transportation for crew rotations, equipment transportation, bunkering operations, supply of water and provisions, sewage and sludge transfer, operational protection assistance (anti-collision, clearing transit routes), emergency towing capacity to ensure the continuity of seismic operations and maritime assistance and support during maintenance operations.
Bourbon Petrel has been supporting the CGG Symphony seismic vessel in the Black Sea since July 2013, where it has carried out many refueling operations, including inline bunkering, in addition to towing work and crew rotations. Bourbon Fulmar is currently assisting the Viking Vanquish, a seismic vessel operating in Northern Europe.
“We are pleased to announce the delivery of the hybrid Seismic support vessels,” said Jamal Abki, General Manager, Grandweld. “The highly innovative features of these vessels will set high market standards for efficiency and operational excellence. The delivery of these vessels marks yet another fruitful collaboration between Grandweld and Bourbon.”
Importantly, the six support vessels operate on versatile hybrid propulsion systems to provide optimized fuel efficiency over a diverse range of tasks: diesel-electric power is often better suited for escort operations, while mechanical propulsion is used for maximum power in transit and during operations. The propulsion systems include Berg shaftlines, Caterpillar engines and generators and Techsol electrical systems.
Representatives from Bourbon and CGG declined to say how much the hybrid propulsion hiked the ships’ overall cost, but they did estimate fuel savings in the range of 30-40% compared to standard vessels. Each vessel saves a few thousand dollars per day on fuel thanks to the operational flexibility of the hybrid propulsion systems.
In addition to these advantages, Yves Rastoin, Maritime Director, CGG, said his company reaps a number of other benefits from its partnership with Bourbon. He said Bourbon fit CGG’s need for a “long term partner of choice” while meeting the specialized nature CGG’s 22 globally active seismic vessels – and at a good price. Furthermore, Rastoin cited Bourbon’s strong track record as a platform on which to develop a long-term relationship. “We selected Bourbon for their experience in vessel series management, and for their capacity to optimize their availability, and deliver their high operating standards.”
“Along with our efforts to streamline our fleet of seismic vessels and reduce the number of shipmanagers, CGG has launched a dedicated program for its chartered fleet of support vessels,” Rastoin said. “The series of six specially designed vessels under a long-term charter agreement with Bourbon is the first of its kind for our industry. Given the successful operations already carried out by the Bourbon Petrel and the Bourbon Fulmar, we feel confident about having made the right choice of partner and customized support vessel design for our seismic operations. “
For Bourbon, the newbuilds are encompassed in its “Bourbon 2015 Leadership Strategy” plan, which entails company-wide investments nearing $2 billion (USD) to bolster the group’s global fleet. “The partnership with CGG is entirely consistent with Bourbon’s development strategy, based on a modern, standardized, high-performance fleet and perfectly trained crews, in accordance with our operational excellence goal,” said Rodolphe Bouchet, vice president of business management for Bourbon’s marine services department. “The success of these first seismic support vessels attests to Bourbon’s capacity to assist clients on demanding projects by providing them with quality services in constantly evolving environments and markets.”
Also part of the deal, Bourbon and CGG extended their partner in a number of other related areas, most specifically safety and training operations: the captains of the Bourbon vessels receive training on CGG’s seismic operations simulator; drills and training exercises focusing on operational quality are held on a regular basis to prepare Bourbon and CGG crews together and to share best practices; and finally, a single contact person at Bourbon is responsible for vessel contract administration - this person is the key client contact on a daily basis. 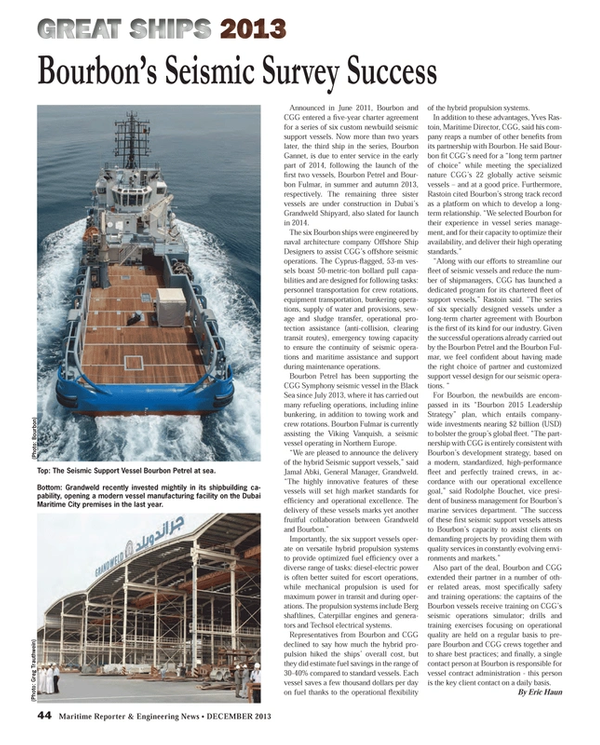