The ship was been designed as IMO DP Class 2 shuttle tanker, and is outfitted with a single slow speed diesel engine, one controllable pitch propeller, two bow and one stern thrusters, one bow and one stern retractable azimuth thruster and a bow loading system suitable for tandem loading operation in the Brazilian  Waters-Campos Basin. It has a flush deck with forecastle deck for arrangement of the bow loading system. And the full spade rudder with flap system has been installed for good maneuverability.

The main engine of MAN 6S70ME-C8.2 Tier II is derated to 15,200 kW of MCR at 82rpm for fuel economy and flexible operation at part load. The speed of the vessel at draft of 16m is 14.8 knots at 90% MCR (13,680 kW) with 15% sea margin.
The cargo pumping system allows a maximum unloading rate of cargo oil 12,000 cu. m./hr. with three cargo oil pumps. The maximum cargo loading rate is 17,000 cu. m./hr. through midship cargo manifold or a cargo loading rate of 9,000 cu. m./hr. through the bow loading station. The vessel is equipped with Bow/Stern tunnel thruster having a power of 2,200 kW and azimuth thruster having a power of 2,500 kW with single speed motor for using dynamic positioning and auxiliary propulsion. 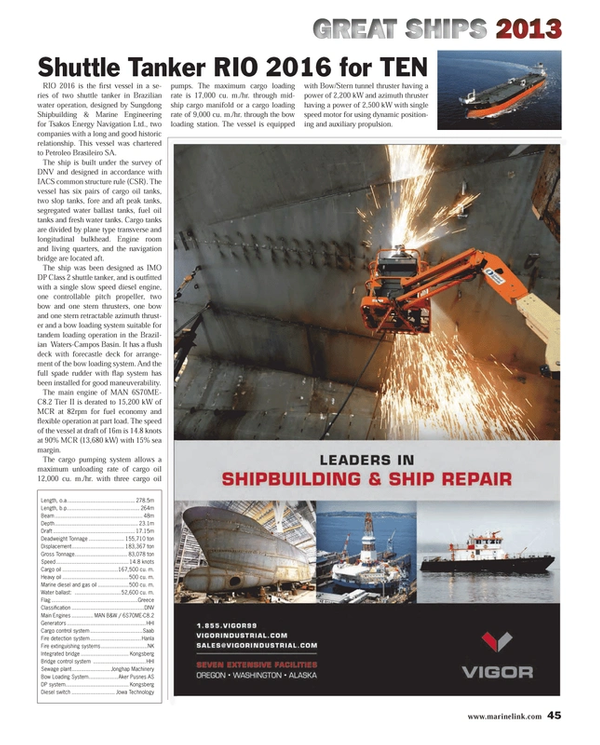