Viking Life-Saving Equipment launched its latest innovation, the Viking LifeCraft system. In 2009, inspired by discussions during sessions of the Safecraft Working Group, Viking’s development teams aimed to build a lifesaving craft that combined all of the advantages of modern lifeboats such as self-propelled maneuverability with the flexibility, comfort and smaller footprint of today’s liferafts. The developers sought a product that would enable rapid, mass evacuation with maximum safety for passengers and crew, and thus the Viking LifeCraft System was produced. The LifeCraft System consists of two main elements: The LifeCraft itself – a self-propelled inflatable vessel with four engines for a high degree of maneuverability and safety and a storing and launching unit, either placed on deck or built in, containing up to four LifeCraft units with a capacity of 200 persons each, for a total capacity of 800 persons.  According to the manufacturer, there are more advantages of this hybrid solution. For example, the new LifeCraft System is safe on an entirely new level, too. A specially designed chute system helps evacuees with special needs, such as children, the elderly and those on stretchers, setting a new standard for full-spectrum marine evacuation. And it’s not just the life-saving capabilities of the new LifeCraft System that are hitting the headlines in shipowner circles. The system also takes up less room than lifeboats, freeing deck space for shipowners keen to provide their passengers with more cabins, shopping opportunities and other journey enhancements.
www.viking-life.com 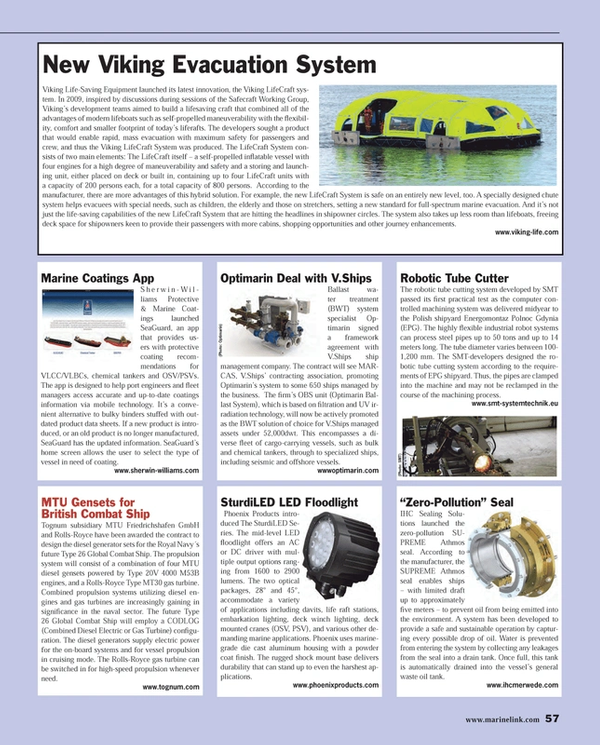