U.S. Port Security and the Impact of Sequester & Budget Woes

This article describes the impact of the “sequester” and budget showdowns on ports and port security, and also gives a preview of the House-Senate Conference on the Water Resources Development Act (WRDA).  On the one hand, ports and port security have been severely hampered by the ongoing budget battles, as has the rest of the U.S. Government and economy.  On the other hand, Congress appears to be on the brink of reauthorizing the Water Resources Development Act for the first time in six years.  This law will authorize increased use of the Harbor Maintenance Trust Fund (HMTF) on port dredging and maintenance projects allowing a number of major ports to attract more business as a result of deeper harbors, and the accommodation of the anticipated post-Panamax vessels.

Budget Background
The Budget Control Act of 2011 (BCA) put in place a process by which, if the Congress and the President could not agree on how to balance the budget, automatic across-the-board budget cuts, known as the sequester, would come into effect.  The sequester would remain in place, unless superseded, from 2012 to 2021.  As we now know, no such deal was reached by the so-called “Super Committee” thereby triggering the first round of funding reductions on March 1, 2013.
These cuts are not only automatic but they provide very little, if any, discretion to cabinet and agency heads to choose what programs to cut.  As a result, virtually no federal program is left untouched.  As mandated by the BCA, the cuts will be divided between Department of Defense/national security spending and all other discretionary spending.  Pay for active duty members, VA benefits, as well as Social Security benefits, are exempt from the sequester.
Department of Homeland Security (DHS) officials testified before Congress in April of this year that the sequester required “more than $600M in cuts across [Customs and Border Protection] CBP, affecting operations in the short, and long term.”  Not only did these cuts affect travel at all U.S. ports and entry gates for foreign visitors, but CBP was forced to reduce 21,000 in flight hours for its fleet of aircraft impacting national security.  The Transportation Security Act (TSA) also suffered an 8.8 percent budget cut as a result of the sequester, again hampering work at our major airports.  The Maritime Administration reported in September that if the sequester continues, the Maritime Security Program could lose upwards of 15 vessels; ships in the Ready Reserve will be cut; and merchant marine jobs will be lost.  The Army Corps of Engineers was similarly affected by the sequester until Defense Secretary Hagel found relief in the Pay Our Military Act allowing him to recall 400,000 furloughed civilian personnel.
Eventually Congress enacted a FY2013 Consolidated and Further Continuing Appropriations Act for the remainder of 2013.  Having done this in the middle of the year made it nearly impossible for agencies to start new programs or fund any grant programs.  Contracting was also severely hampered by the lack of budget certainty.

The Shutdown
As if sequestering funds is not bad enough, the FY2014 fiscal year began with a two-week government shutdown.
On October 1, 2013, the new 2014 budget year began, but, to date, no single appropriation bill has been enacted.  Once more the Congress and the White House could not agree on a budget deal in time for the new fiscal year, resulting in a two-week budget shutdown.  Except for “essential” personnel, all other government personnel were furloughed, leaving most agencies without the wherewithal to manage any program.  Once again, port and security projects were held up and delayed until a short term Continuing Resolution (CR) deal was passed on October 17, 2013, funding the government through January 14, 2014, and extending the debt ceiling until February 7, 2014.
According to a statement from Senator Barbara Boxer (D-CA), Chair of the Senate Committee on Environment and Public Works, the shutdown forced the Army Corps of Engineers to “completely shut down the permit process for projects nationwide…halt[ing] 650 pending actions in just one of the Corps’ 38 Districts.”  Rating agencies such as Standard and Poor’s and Moody’s estimate that the shutdown cost the economy approximately $23 billion in lost economic output.

The New Budget Negotiations
for 2014
The FY2014 short-term CR also called for the establishment of yet another committee to resolve differences between the House and Senate.  Senator Patty Murray (D-WA) and Congressman Paul Ryan (R-WI) are the respective Co-Chairs of the new committee.  Their goal, as mandated by the law, is to negotiate a broader FY2014 fiscal deal by reconciling the differences between the House and Senate budget resolutions.
The work of the budget committee is herculean because there are not only vast differences between the House and Senate budgets, but there are ideological differences between the two chambers, led by different political parties, on the role of government.  The Senate budget proposes $1.85 trillion in additional deficit reduction over the next ten years, equally divided between new revenue and cuts to defense and civil programs.  The House budget would eliminate the sequester for defense programs, while keeping it in place for civil programs and not providing for any new revenues or tax increases.
In Washington, DC, expectations for a grand bargain are very low, but there is some hope that a new resolution on the budget can be worked out –at least for 2014.
Both sides agree that the sequester has been injurious to managing government programs, but what will replace it remains to be seen.  If a resolution is worked out, the appropriators can write legislation to live within the new budget guidelines.  Senator Mikulski (D-MD), Chair of the Senate Appropriations Committee, is urging the joint committee to act quickly so she and her House counterpart, Rep. Hal Rogers (R-KY), can begin to write the real budgets for FY2014 in the form of the required appropriation bills.

Impact on Ports from Budget Games
As this article goes to press, we are waiting to see what the joint budget committee can produce, how sharp the cuts are to civil programs, and whether appropriations will finally be enacted for 2014.  If all Congress can continue to do is enact another CR, agencies will be forced to live within 2012 or 2013 budget limits and have little discretion to administer new programs or grants.  Without appropriations, DHS will not be able to award port security grants; and the Maritime Administration will not be able to award any new port development grants or small shipyard grants.

WRDA: The Water Resources
Development Act
The House and Senate are also in the midst of negotiations to adopt a final Water Resources Development Act.  This law has not been reauthorized since 2007.  Without its passage, the Army Corps of Engineers can not undertake any new port dredging projects making this law vital to the port infrastructure of this country and its economic growth.  The House and Senate have passed very different versions of WRDA.  But with its passage in the House by a vote of 417-3, and in the Senate by a vote of 83-145, expectations are much higher for final passage of a bill that the President will sign into law. The result will be the first WRDA bill in six years and a major step forward for critical port development work.
In brief summary, the House and Senate took different approaches to a WRDA bill and most of the convoluted results were because neither body wanted to pass a bill with “earmarks” in it.  The House approach was to identify in the legislation 23 projects that the Corps would execute, including dredging the Sabine-Neches Waterway (at a cost of $780M), Savannah Harbor in Georgia ($461M federal share), and Cape Canaveral, FL; gradually phase in the use of funding from the HMTF (up to 80%); set a three-year limit on Corps’ feasibility studies, capping them at $3M, with only three levels of Corps’ review, the so-called 3-3-3 rule; and de-authorize $12B in inactive projects.  Because the House bill contains significant environmental reforms, Chairman Shuster has added the word “Reform” to the title of his bill, making it the “Water Resources Reform and Development Act.”
The Senate approach was to authorize those dredging projects for which the Corps has finished reports and referred them to Congress; increase flexibility for non-Federal sponsors of projects; codify a Corps initiative to complete feasibility studies in less than three years; maintain while improving, the environmental review process; direct all funds in the HMTF be spent for port maintenance; and create a legislative process to identify projects for de-authorization.
One can begin to see the outlines of a WRDA compromise.  Credit must be given especially to House Transportation Committee Chairman Bill Shuster (R-PA) for getting a major port infrastructure bill reported and passed by the House in such a decisive manner.
We will report the outcome of this major legislation and the outcome of the budget battles for 2014 in a future issue. 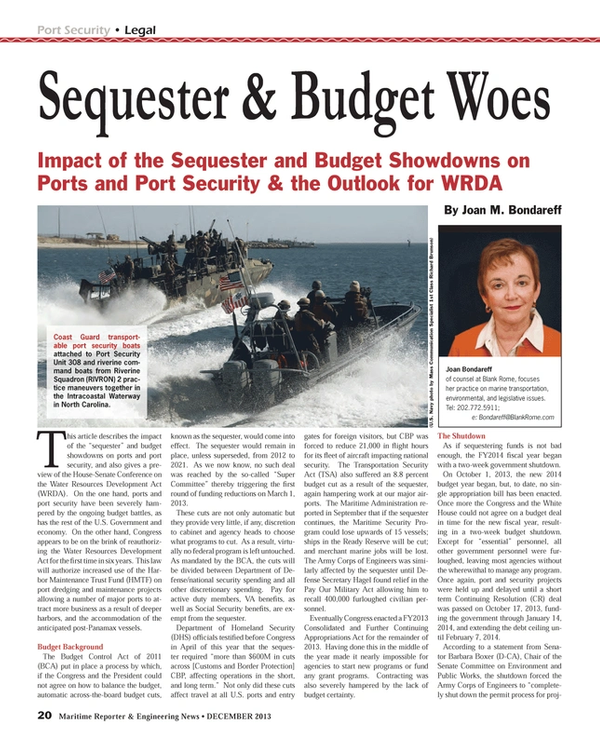