Lloyd’s Register recently conducted a survey that indicated that the majority of major ports around the world are either planning for, or are anticipating, the widescale development of LNG bunkering. One of the locations is the Port of Rotterdam, which is a busy port with dense traffic on the various waterways consisting of both maritime and inland vessels.

During the analysis, the probability of ship collisions was assessed and then the consequences were identified. The first phase of the study investigated the probability of a collision using the Safety Assessment Models for Shipping and Offshore in the North Sea (SAMSON), which was developed by MARIN. Input for this model included ship movements, ship characteristics and the layout of the terminal.

For the second phase of the study, the Maritime Collision Model (MARCOL) was used. A Quantitative Risk Analysis calls for a damage calculation tool such as MARCOL because it only requires a handful of parameters of the many ships involved in collision events. The MARCOL tool automatically models the collision events and rapidly calculates the penetration area in the cargo tank of the stricken vessel. For this study, more than 100,000 collision events were calculated by MARIN’s high throughput computing grid.

Results of the study clearly showed the added value of combining SAMSON and MARCOL, over simplified models. For instance, the results demonstrated that the relationship between the kinetic energy of the striking vessels and the probability of penetration of the cargo tanks was actually low. Geometrical properties of the striking vessel, such as the freeboard and the bow shape, determine the outcome of a collision event to a much larger extent. The results of the Quantitative Risk Analysis are therefore helpful when considering risk-mitigating measures such as speed reduction for a specific marine group. 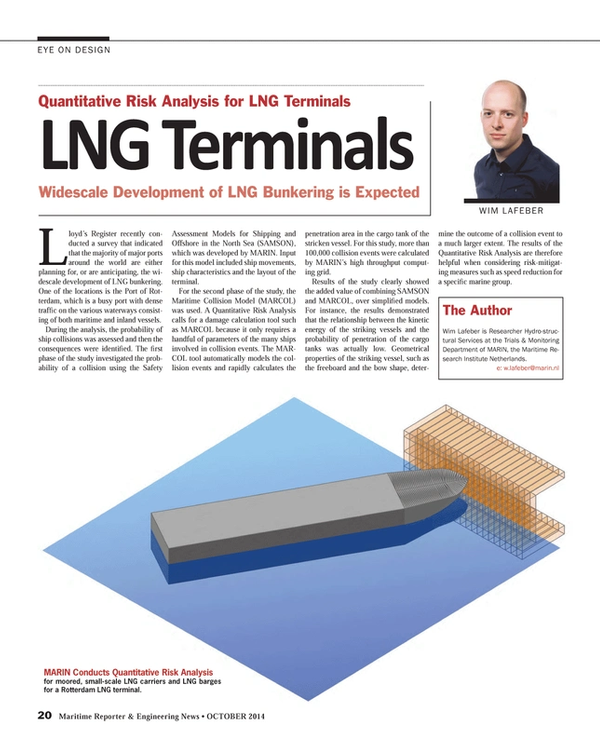