Earlier this year Rolls-Royce was bestowed the Heyerdahl Award for its Enviroship concept. Maritime Reporter & Engineering News  recently caught up with Per Egil Vedlog, Design Manager, Rolls-Royce Marine AS, for his insights on the honor as well as the challenge in designing for the maritime future.

Anyone that has spent much time in Norway must realize that the Norwegian maritime cluster is a special one, bound by generations of designing, building and operating in, around and under the sea. Unlike many ‘clusters’ that are formed out of financial expediency, all matters maritime are seemingly interwoven into the Norwegian DNA. And while the country is relatively small on population, logging in just shy of five million inhabitants, it is a global giant on maritime thought and innovation.
So Per Egil Vedlog, Design Manager of Rolls-Royce Marine AS, was a natural choice for insight on innovative maritime design, fresh off receiving the Heyerdahl Award for its Enviroship concept, the award presented by His Majesty King Harald at the Norwegian Shipowners’ Associations Annual Conference in Oslo earlier this year.

The Enviroship Concept?
The Environship concept is an innovative ship design which integrates a highly efficient gas-based power and propulsion system with an innovative hull design to provide significant reductions in emissions. In bestowing the Heyerdahl Award, the committee, chaired by Secretary General of the International Chamber of Shipping (ICS) Peter Hincliffe, noted that Rolls-Royce had taken a holistic approach to vessel design, combining a number of innovative solutions that increased energy efficiency and contributed to significant reductions in emissions.
“The Enviroship concept is built on five main technology pillars: PROMAS, hybrid shaft generator, gas fuel engines, wave piercing technology and the system engineering and integration,” said Vedog. “The systems integration and overall systems integration is critical.”
“For us it is very important to be recognized by these awards because they recognize our extensive R&D and innovation work,” said Vedlog, a 30 year veteran in ship design. And while Rolls-Royce is the name on the award, Vedlog attributes some of the success to the Northwest coast Norwegian Maritime Cluster, which provides he and his colleagues ready access to the design and equipment manufacture expertise of colleagues both in and outside of the company, an accrued knowledge base that that spans generations. “We have easy access to high maritime technology and innovation competence,” said Vedlog.

Innovation by Design
While the Norwegian maritime cluster receives partial credit, the legendary innovative spirit of the country is deeply rooted in something relatively simple: need. “Norway is a high cost country, and we have very high labor costs. So we need to compete on technology,” said Vedlog. “We excel on the high technology projects, and we have found that when you combine technology as we have done on the Enviroship concept, you are able to get very good performance.” But make no mistake, the Enviroship concept is not simply innovation for the sake of innovation, and Vedlog stressed that showing owners rapidity of investment payback is central to every project. “An important part of our work is doing cost benefit analysis for the owners, to estimate payback time. So we have seen time and again when you combine technologies, the buy in cost may be a bit higher but the payback time can be quite short.”
Until the last few years, it could be argued that “being green” was more statement than action. But a proliferation of increasingly stringent maritime rules in regards to ship performance and emissions has forced all ship owners to adopt cleaner and greener practices. That, combined with a large and strong supply of cheap energy, particularly LNG in the United States, is a compelling driver for designers and owners today. “The environmental footprint focus is growing in importance, as owners are very much more focused today on their environmental footprint,” said Vedlog. “So in turn it is up to us to develop projects and solutions that have a favorable environmental footprint as opposed to off-the-shelf designs, which in many cases are very old technology.  For us it is very important to demonstrate that if you have a little bit extra investment cost, the payback time can be very short.”
Vedlog said that while the Enviroship concept has five main technology pillars, it is the gas fuel system that is a cost driver in this design. “It is a little bit more expensive, and it takes a bit more space, so you have to be clever with the design to not eat into cargo space.” The gas fuel system is the central contributor to an estimated 22% CO2 reduction, and the wave piercing hull form is a major contributor too, with an estimated 10% less resistance in the various wave conditions of the demanding North Sea.
According to Vedlog the Enviroship concept is perhaps best suited to two or three optimal ship types, including LNG Bunker, Tankers and General Cargo/Containerships, but it is not ship type specific: “There’s no reason this concept cannot be adapted to most commercial vessel types.” While it is dubbed the Enviroship Concept, market realities mean that in the real world, perhaps an owner will adopt only one or a few of the design concepts in a given vessel.
“It’s important for Rolls-Royce to demonstrate how we efficiently and effectively combine in-house technology and how we offer a lot of competence in-house, and how we are able to put together in-house technology in an optimal way with complete systems,” said Vedlog. “There will be cases where we are able to implement only part of the Enviroship concept, when the owner specifies, for example, another powerplant. We are not 100% locked to our system, we can offer a part of it as well.”

The 5 Technology Pillars
•    PROMAS: The PROMAS system is a integrated sub system based on a optimized combination of propeller, a hub cap, a rudder bulb and the rudder.
•    Rolls-Royce Gas Engines already meet IMO Tier 3 requirements that come into force from 2016.
•    HSG – Hybrid Shaft Generator: The HSG system is described in detail to the left
•    Rolls-Royce Wave Piercing Technology: A wave piercer is a ship equipped with a unique bow which is designed to “pierce” through the waves rather then riding on the top.
•    Conceptual,Basic & Detail Design: Part of the “Environship Concept” is a systematic design approach based on Life Cycle Cost Analysis & Cost Benefit Analysis with owners defined operational profile. 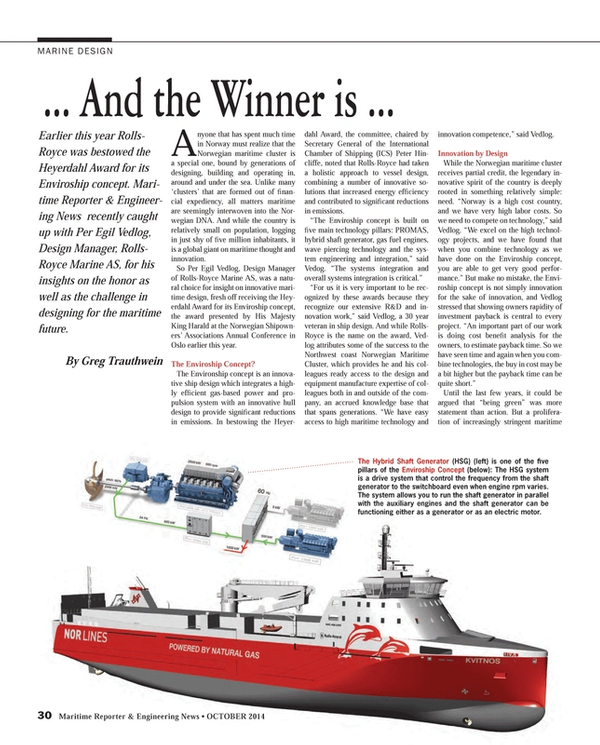