After all, the industry was created in America ...  it is only appropriate that the United States dominate it again.

Offshore supply vessels (OSVs), also known as platform supply vessels (PSVs), have been a distinct vessel type since 1956, when the MV Ebb Tide was placed into service in the Gulf of Mexico.  Ebb Tide was designed by Alden J. “Doc” Laborde to meet the growing demand for vessels to service the increasing number of offshore oil drilling rigs in those waters.  Previously, this new industry had been served, albeit inadequately, by existing vessels, particularly surplus amphibious assault barges.  Ebb Tide was designed with the pilot house at the bow and with an open deck from there aft to the stern.  It was an immediate hit with customers and formed the foundation of the Tidewater Company, now a leader in the industry.

The problem, if it can be considered from that perspective, was that the existing statutory and regulatory scheme had not envisioned such a vessel.  Although relatively small, it could carry a significant amount of cargo, including bulk liquid cargo.  In a different configuration, it could carry a significant number of persons in addition to crew.  The U.S. Coast Guard was at a loss regarding how these vessels should be regulated.  Likewise, the classification societies, including the American Bureau of Shipping (ABS), had no succinct rules for their classification.  The Coast Guard and ABS did the same thing that Mr. Laborde had done – they improvised, initially developing one-off, ad hoc approaches intended to allow the innovative vessels to continue working while ensuring that the crews, cargoes, and vessels were safe.

On October 6, 1980, Public Law 96-378 was signed into law.  It established the offshore supply vessel as a separate category of vessel subject to inspection by the Coast Guard.  It also redefined the term “passenger” as regards OSVs to exclude a person employed in some phase of exploration, exploitation, or production of offshore mineral or energy resources served by the vessel.  This provision exempted OSV crew boats from coverage under the small passenger vessel regulations.  The statute also established minimum manning levels for OSVs and provided for licensing and certification of officers and crew.  Finally, the new law made all OSVs subject to inspection, including those operating under bareboat charters.

The process of drafting and promulgating regulations implementing the new statute turned out to be excruciatingly long.  In the meantime, though, the Coast Guard issued guidance to its field personnel and to the industry in the form of a Navigation and Vessel Inspection Circular (NVIC).  As its name implies, NVIC 8-81 “Initial and Subsequent Inspection of Uncertified Existing Offshore Supply Vessels under Public Law 96-378” provided guidance for applying standards to OSVs (and later, liftboats) that were already in operation when the statute was enacted.  This guidance was updated and expanded by means of NVIC 8-91, entitled “Initial and Subsequent Inspection of Existing, Uncertified Offshore Supply Vessels, Including Liftboats”, which superseded NVIC 8-81.

After two Advance Notices of Proposed Rulemaking (ANPRMs) in 1983 and 1987 and one Notice of Proposed Rulemaking (NPRM) in 1989, the Interim Rule for Offshore Supply Vessels was finally promulgated on November 16, 1995.  For the first time, it provided a complete set of regulations (new Subchapter L of Title 46, Code of Federal Regulations) applicable to new OSVs, including liftboats.  For purposes of the regulation, a new OSV was any such vessel that was certificated  on or after March 15, 1996.  OSVs that were certificated prior to that date were considered existing OSVs.   Existing OSVs could either comply in their entirety with the new regulations or comply with the previous regulations and policy, including the NVIC.  The OSV final rule, largely adopting the interim rule, was promulgated on September 19, 1997.  Various amendments have been promulgated over the years.
It gradually became apparent, though, that the designers of the OSV program had imposed unforeseen constraints.  Few envisioned in the early days of the industry that OSVs would exceed the 500 gross ton upper limit provided for in the 1980 statute.  The oil and gas industry, though, kept building larger and larger rigs, drilling further and further offshore, and operating in harsher conditions than the Gulf of Mexico.  The support vessels, particularly the OSVs, had to become larger and more robust in order to keep up with the demand.  This was not a problem in other countries, where there was no artificial limit on OSV size, but it put an unexpected constraint on the OSV industry in the United States.

Included within the Coast Guard Authorization Act of 2010 (Pub.L. 111-281) was section 617.  This section eliminated the upper tonnage limit of 500 GRT or 6,000 GT ITC for OSVs and set certain manning and construction requirements for larger OSVs.  The section also provided for the direct promulgation by the Coast Guard of regulations implementing the statutory amendments.  The impetus for these amendments was the drastic change in the industry, particularly internationally.  While the U.S. offshore industry was bound by the 500 GRT limit, foreign competitors were building and operating larger OSVs, capable of carrying more freight further offshore.  The United States, where the OSV had been born, was forced to play catch-up.  The 2010 statutory amendment was intended to put the U.S. OSV industry back on a level playing field.

As specifically allowed by the 2010 statute, the US Coast Guard skipped over the usual notice of proposed rulemaking (NPRM).  The agency issued, instead, an interim rule (IR) on August 18, 2014 entitled “Offshore Supply Vessels of at Least 6,000 GT ITC”.  While its provisions entered into effect upon publication, the Coast Guard requested comments from the public on potential improvements.  The IR is intended to be consistent with international standards for the design, engineering, construction, operations and manning, inspections, and certification of OSVs.  In one particular aspect, the new regulations may exceed international standards.  The regulations require that tanks on these larger OSVs intended for carriage of cargo oil, including drilling fluids containing oil, comply with double hull requirements developed for tank vessels.  Similar protection is required for fuel oil tank protection on these larger OSVs.  These steps have been taken so as to reduce the risk of pollution in the event of a casualty, a measure that has proven effective on tank vessels and has since been expanded to many cargo vessels.

The ball is now back in the court of the United States offshore supply vessel industry – the naval architects, shipyards, owners, operators and crew members – to demonstrate that they can truly compete in this dynamic global sector.  After all, the industry was created in America.  It is only appropriate that the United States dominate it again. 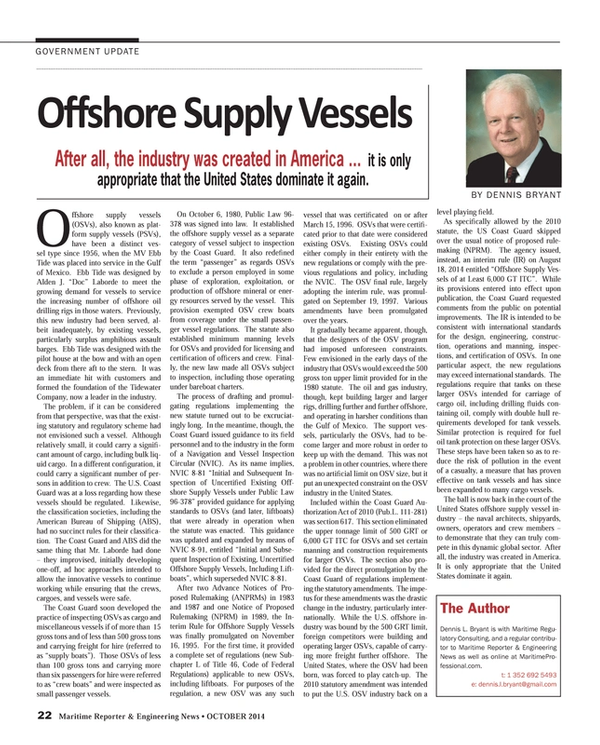