For many years the start-stop function has become a common feature on automotive engines to reduce both fuel consumption and emissions. But the saving potential is much larger with onboard electrical power supply and propulsion systems.
Long-term measurements onboard passenger vessels with diesel-electric propulsion systems have shown interesting insights into the load balance. The operational time with 30 to 40% load, for instance, is much longer than that of 70 to 80% load.
Depending on the size and the number of generating sets on board a given vessel, one of the gensets could be switched off and the remaining set or sets could take on more load, creating far better efficiency.
The common practice of keeping all gensets running to be prepared for when full power is needed again is neither economical or environmentally sound policy.

Managing the Load
The first question now is how this can be managed onboard the ship? There is no chance to make use of the standard starting equipment of the internal combustion engines, as its electric or pneumatic starting equipment is designed for only a relatively low number of starts. Thus it is impossible to use it for frequent starts of the engines to save fuel.
The second question concerns the time needed from the signal to start the next genset to the point of taking over load by the generator. If the generators must be synchronized, the chances to switch off generating sets would be reduced.
However, a proven technical solution offers the E-PP –  the electrical power pack – introduced several years ago by the German specialist E-MS e-powered marine solutions GmbH & Co., in Hamburg. With this system, synchronization of generators is no longer necessary. Thus, the E-PP together with the start-stop function, as well developed by E-MS, is a combination with a potential fuel-saving of up to 12%.

How it Works
At first, let’s take a look to the structure and the operation of E-PP: The onboard installations consist of asynchronous generators, low-voltage inverters and a common DC bus. The generators are excited load depending by assistance of inverters, providing constant voltage at individual frequency. Keeping in mind the characteristics of prime movers, they may be used at the speed of best efficiency or according to demand of electrical energy on board with the respective speed, whichever best corresponds to the energy needs. This might be a speed below or even above synchronuous speed.
The common DC bus provides all services as well as the electrical ship propulsion via inverters with the required AC voltage and frequency. Since just the development of low-voltage inverters has led to equipment in the power range up to 5000 kW, there are now interesting perspectives for this development of E-MS. The system may be applied for all types of ships with large and strongly fluctuating electrical power demands. The best result will be achieved in combination with the start-stop function.
Now the questions above can be answered considering an onboard power supply system working with asynchronous generators. To answer the first question one has only to look at the generators used. These powerful electric machines can be used not only as generators but also as motors to start the engines. And there are no restrictions as far as the number of starts is concerned. Contrary to usual starting equipment the motors guarantee anytime reliable start procedures within a very short time. Their torque is by far larger in comparison with conventional starters, independent of their operating mode. The combustion engines may not only be speeded up to the ignition speed but even to their rated speed. And the answer to question two: Using the generators as starter motor the starting procedure is shortened to a fraction.
Making use of the start-stop function proposed by EMS, reliable and fast starting procedures are important since a rapidly increasing electrical power demand may otherwise lead to a black out. But with the technology described here, the start-up times can be reduced considerably. For instance, with diesel engines in the power range between 100 and 4000 kW the time between the starting signal and power take over can be reduced from 30 or 40 seconds to only ten seconds. Since the combustion engines are always warmed up and pre-lubricated there are no difficulties on the side of the IC engines.
The technical improvements for diesel- and otto-electric on-board power supply systems - even of largest output - are feasible today. One can therefore be eager when the first installation of this technology comes to an application. After more than hundred years of diesel-electric ship propulsion systems, the presently carried out developments promise a considerable saving potential. 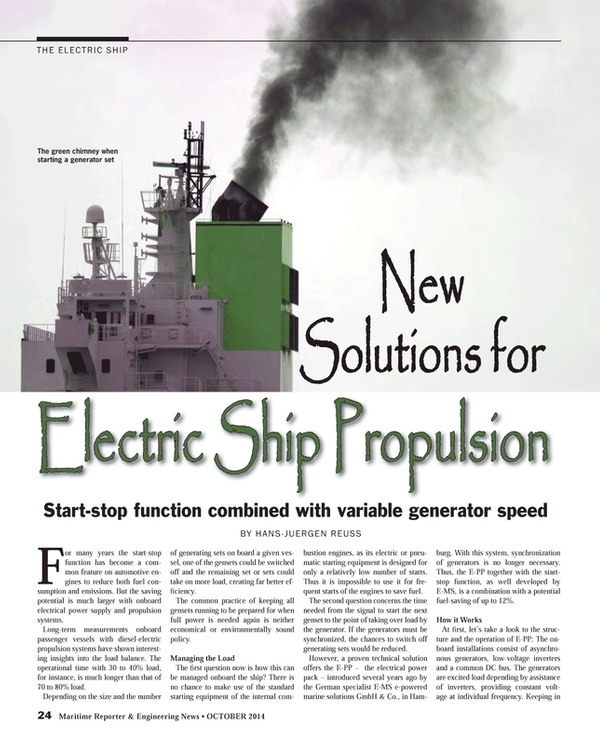