The U.S. Coast Guard Research and Development Center (RDC) in New London, Connecticut, is the service's only command conducting research, development, test and evaluation (RDT&E) support for all 11 statutory missions. Since its commissioning in 1972, RDC has been involved in over 2,000 projects and initiatives that have significantly benefited the Coast Guard and the components of the Maritime Transportation System.

As the demand for research and development capability grows within the service, RDC has adapted an approach to project engagement built around three words: meaningful, relevant and impactful (MRI). This focus has ensured that the Center has an exceptionally high transition rate drawn from its nearly 70-strong project portfolio. In addition to this concerted effort focused on transition, the Center has established a rapid prototyping and testing capability to field solutions to the fleet quickly. This was done in conjunction with Borders and Maritime Security (BMD), a division of the Department of Homeland Security (DHS) Science and Technology (S&T) Directorate, and has placed a renewed emphasis on partnership engagement.
The joint effort with DHS, S&T and BMD is officially designated the Science and Technology Innovation Center, or STIC. This capability is a collaborative effort dedicated to leveraging innovation, prototyping and rapid integration of high-technology readiness level (TRL) solutions to answer the operational challenges of the Coast Guard and DHS.  It was conceived as a response to former DHS Secretary Jeh Johnson’s “unity of effort” initiative. The STIC, with six active projects, recently completed field testing of a tracker designed to support units in pursuit of suspected narcotics smugglers who have jettisoned their loads. The tests were completed in San Francisco Bay and exceeded expectations.
The emphasis on partnerships took a quantum leap forward with the first ever Memorandum of Understanding (MOU) between RDC and the Air Force Research Lab. The MOU established a framework for immediate joint collaboration for engagement; including long-duration UAS, pilot laser strike protection, and overseas technical engagements involved in advanced capabilities for force protection. In addition, the MOU allows greater opportunity for RDC and AFRL to work together on projects of mutual benefit. Several RDC efforts stand to profit from this partnership, including 3-D printing, Arctic operations, modeling and simulation, cyber research, and satellite technology to include CubeSats. Capt. Greg Rothrock, commanding officer of RDC, and Major General William Cooley, commander of AFRL, signed the document in a ceremony hosted at AFRL headquarters.
“RDC is very excited about this new affiliation with AFRL,” Rothrock said. “Establishing an MOU is just the start of what we see as a long-term relationship to collaborate where we can on common research that benefits both the Coast Guard and Air Force.”
RDC has also seen some unique partnerships within its own service. One example is the Search and Rescue Hoax Location Systems and Methods project. It was the first-ever RDC project done in conjunction with Coast Guard Investigative Service, or CGIS. This project addresses the issue of serial hoax callers; individuals who conduct false emergency calls that cost the service time and money while potentially impacting the ability to respond to real emergencies. The project used a three-part approach to evaluate and demonstrate different technologies that would assist CGIS and other partners with locating, identifying and prosecuting hoax callers within the Coast Guard domain. The hoax call project laid the groundwork for future collaboration with CGIS.
Other research focus areas are employing the same MRI focus. RDC has several projects that assess and evaluate unmanned aircraft systems (UAS) and unmanned maritime (surface/subsurface) vehicles (UMVs) for a range of capabilities. This is being done because the use of autonomous systems has grown exponentially in private industry, both in the United States and overseas. Specifically, RDC is engaged with a series of testing and assessment from advanced short-range  UAS and unmanned maritime systems (UMS) to a very exciting Long-Range/Ultra-Long Endurance (LR/U-LE) UAS program.
The Arctic continues to be a focus of the Center’s portfolio, supporting research in Coast Guard Districts 17, 9 and 1. The Center has sent a team to the Arctic for the last few years to embark on the 420-foot medium icebreaker USCGC HEALY. With private and public partnerships, they conducted a wide range of experiments that included the evaluation and testing of maritime communication solutions for use in the Arctic and the development and testing of the next generation Arctic navigation safety information system. Significant growth in maritime traffic in this region has prompted RDC to research responses to oil in ice, which is a complicated pollution response event.
The Coast Guard is known worldwide for its expertise in Search and Rescue, or SAR missions. In support of this critical capability, RDC continues to explore more effective and efficient ways to complete this mission. From conducting survival modeling, to testing new alternatives to pyrotechnic distress signals, to leveraging the latest technology – like evaluating the potential use of Cubesats as a SAR tool – RDC and its partners are at the forefront of research.
When looked at in its totality, the USCG RDC’s portfolio is wide-ranging, touching every single aspect of the service … what better way to be meaningful, relevant and impactful!
About the Author:
Dr. DiRenzo is the Director of Research Partnerships at the Coast Guard Research and Development Center (RDC). A retired USCG officer who had afloat command, he is also RDC’s Project Manager for the Center’s Artificial Intelligence Disaster Response project. Dr. DiRenzo is a frequent contributor to Maritime Reporter and he teaches for American Military University and Northcentral University. 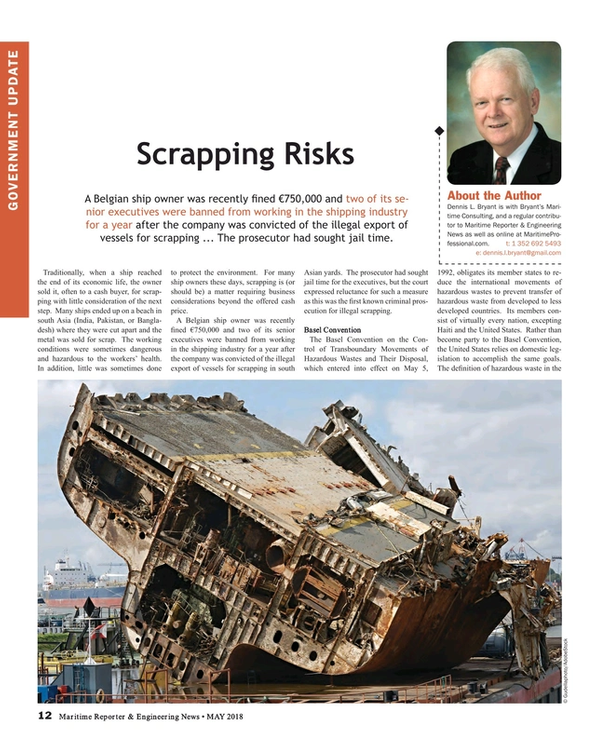