A smart shipping survey conducted in January 2018 found that, while the majority of maritime industry executives believe digitalization and big data will transform the sector, only 8.7 percent  currently see it as a major part of their operations.

Unpredictability and disruption have made the past decade anything but smooth sailing for the global shipping industry. Volatile trade patterns and policies, low freight rates, fluctuations in commodity prices and within global demand have all contributed to a highly competitive environment which requires careful navigation by shipowners. To survive – and thrive – in such challenging times, shipowners cannot afford the luxury of complacency. They must adapt to become the fittest that will survive the latest evolution of the market at large.

Digitalization for Today
More and more shipping companies are embracing big data and digitalization to achieve operational and commercial efficiencies and drive growth.

A look through recent headlines in the maritime media reveals a growing number of stories about large sums being invested in digital strategies. The Journal of Commerce has reported that, over the last five years, more than $500 million has been ploughed into digital and technology start-ups aimed at transforming the maritime industry. CMA CGM has introduced a host of initiatives and measures to drive the use of innovative technologies across their business. Maersk and IBM have announced a joint venture seeking more efficient and secure ways to conducting global trade using blockchain technology.

Shipping has been slow in adopting digitalization, compared to other industries. A smart shipping survey conducted in January 2018 found that, while the majority of maritime industry executives believe digitalization and big data will transform the sector, only 8.7 percent  currently see it as a major part of their operations.

That may change soon, as measures taken by industry giants signal the pressing need for a real, tangible consideration of the benefits of digitalization across the shipping and logistics industries. Regardless of business size, digitalization is a must for those who want to thrive in the current competitive landscape, and it has already reshaped the way in which some businesses operate.

Soon, the entire sector will be playing catch-up. But it is the early adopters who will see the greatest transformative benefits, and they are the ones that will emerge as industry leaders of the coming decade.

Data Insight
Data is now a commercial driver and a commodity in its own right. That is something that shipping and logistics companies need to understand.

With more than 300 offices in more than 50 countries, GAC (Gulf Agency Company) collects an immense amount of data from its day-to-day operations. It is wide-ranging in scope and scale – from insights into purchasing decisions and trends, to more macroeconomic data surrounding the emergence of different trade routes as companies adapt to changing demand. It is valuable information which enables us to provide tangible market intelligence on emerging trends to our customers – giving them what they need to respond with informed commercial decisions. Data also allows us to tailor solutions to individual customers according to the markets in which they operate.

That is the very essence of big data – the smart application of hard facts and insight gained from operating on the frontline changing the way that business is done.

The rapid evolution of new technologies has paved the way for greater efficiencies in shipping and logistics. Supply chains can be further streamlined and greater efficiency achieved by committing to integrated operating models that provide previously unrealized transparency and access to valuable data. The potential of those integrated models span companies or sectors is vast.

Platforms
GAC has pioneered a digital platform based on five core drivers: data-based decision making; ensuring easy engagement and connectivity with customers; sharing data with peers and key stakeholders; collecting and analyzing sensor data; and ensuring a customer-focused and well-maintained IT system.

Focus groups are held regularly to equip the company’s IT team with service-related knowledge to help improve our group’s offering. As its digital platform evolves, GAC will be able to adopt changes faster and spread them through the group to provide informed guidance on business developments.

But building new data platforms and changing products or services is not enough. To fully embrace and benefit from digitalization, the shipping industry must change its mindset to keep pace with the changing business environment in which they operate.

There are a lot of technologies ready to be implemented in the business, but we need people with the right skills and attitude to implement the new way of working.

As shipping catches up with on the adoption of digitalization already seen in other industries, it’s vital to define a clear digital plan as an integral, complementary part of our overall business strategy. And while this may present a challenge, companies who fail to do so risk finding themselves out of step with changing markets and customer expectations.

It is well documented that the shipping and maritime sector has much to gain from big data and digitalization – but only if it is willing to step up and embrace change to unlock the benefits. It’s about going from opinions to facts and with the new insights make the right actions. 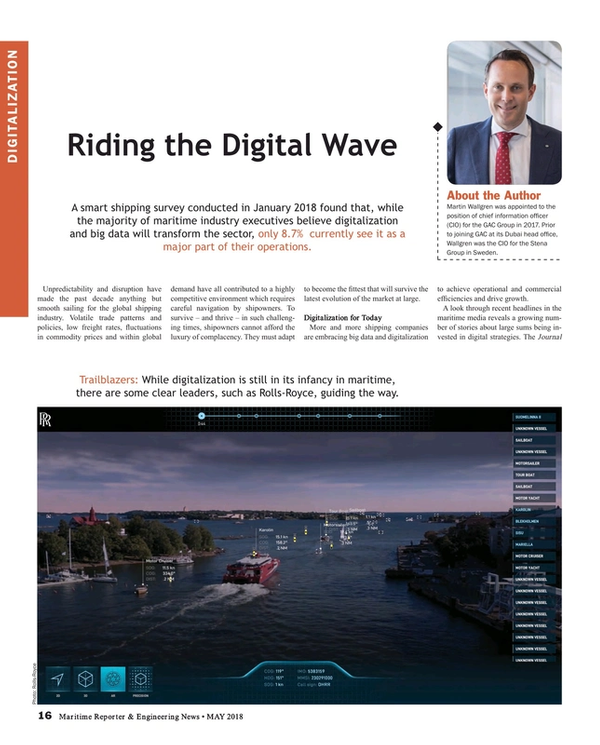