Editorial: The MAN in Command

I had never personally met with U.S. Coast Guard Commandant Admiral Paul Zukunft before I sat with him in his office at Coast Guard headquarters in Washington, D.C., last month, but having sat with a long list of government, military and corporate leaders in my time, my expectations were someone who was confident, focused and, well, commanding. He’s all that and more, but what I did not expect was that the Commandant would be faster than I to the Tweet! (I rationalize by telling myself that his Public Affairs staff offers a quick hand in this regard). Admiral Zukunft is a perfect interview for our pages any day, but particularly this edition, our “U.S. Coast Guard Annual.”

Admiral Zukunft, like every Commandant before and every one to come, has a large, diverse, ever-challenging and always changing plate of responsibilities. His ‘short list’ is actually a rather long list, as Admiral Zukunft seeks to drive sexual assault out of the Coast Guard; prepare the fleet for operations through 2061; thwart illegal drug flow into this country with an ever widening and much improving toolbox of intelligence assets; and envision a plan to bolster our capability in the Arctic. And that’s just for starters.

Today’s Coast Guard is a virtual ‘Swiss Army Knife,’ with broad and crucial responsibilities in protecting the best interests of the United States. For this industry there are several immediate pressing matters that we discuss. On the regulatory front, Ballast Water Technology Systems and Subchapter M uninspected towing vessel regulations are both priority one. On the former, Admiral Zukunft insists that the current course of independent lab verification of the technology is the only path, saying “once we have the technology box checked, we can move briskly in putting forward the final rule.”

The other area of high interest is the status of the Offshore Patrol Cutter (OPC). To put its importance in perspective, Admiral Zukunft said that the OPC will be his defining moment, as it is the largest investment in USCG history and will be designed to operate beyond 2060. The final selection of the shipbuilding team to build OPC is currently scheduled to be announced in Q4 2016. 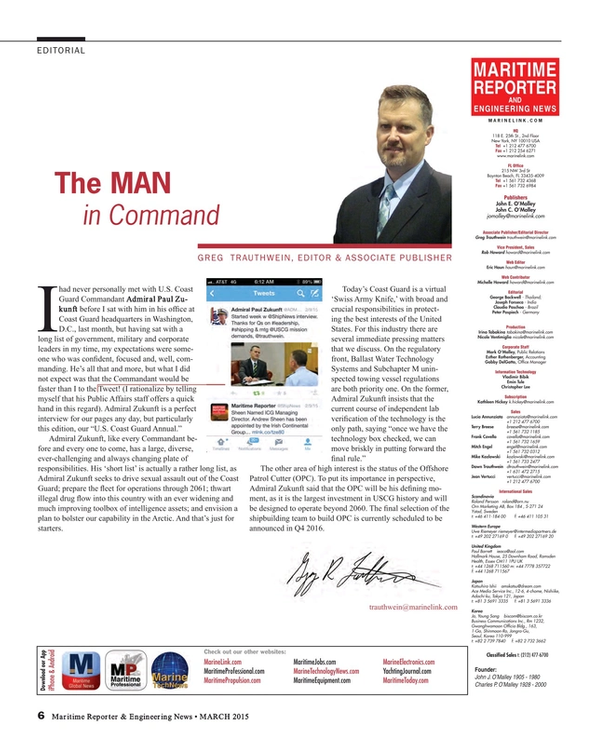 Read Editorial: The MAN in Command in Pdf, Flash or Html5 edition of March 2015 Maritime Reporter