Headquartered in New Delhi, India with operations in the U.S., ARI Simulation’s business for more than two decades has been to design and deliver world-class simulation solutions across multiple maritime sectors. MR spoke with Shravan Rewari, CEO, for his insights on technologies and technique moving the maritime simulation markets.

Simulation for MOL Synergy
In late October 2014, MOL Synergy inaugurated one of India’s largest Maritime Training Centers in Chennai, India, a training center equipped with a complete range of maritime simulators from ARI including full mission navigation, engine room operations and cargo handling simulators among others.
The Full Mission Ship Maneuvering Simulator is characterized by a ‘near-real’ level of visualization over a 240 degrees field of view. The visual scenario is made up of a large array of 29 channels of display, that provide a fully synchronized continuous display of the horizon, both from the bridge center and from the bridge wing.
The simulator is equipped with a ‘bridge wing’ system that adds a new dimension of realism to ship maneuvering training for masters, pilots and other personnel, as the trainee can ‘step into’ the bridge wing and get a closer look at the ship side and berth for mooring exercises or to observe buoys at close quarters during channel transit.
•    The Full Mission Engine Room Simulator is a comprehensive immersive simulation of an engine room on-board a merchant vessel. The system comprises an engine control room with associated systems and subsystems under control from this space, a full scale simulated model of a typical switchboard for power management and distribution, a switchboard for handling emergency power supply, a complete mimic pipeline system of machinery spaces, and an independent station for local or emergency control of main engines and auxiliaries.
•    The Full Mission Liquid Cargo Handling Simulator comprises digital operating and monitoring controls displayed on screens embedded in a full size Cargo Control Console (CCR).

Virtual Crane Simulator
A new Virtual Crane Simulator was unveiled at Korea Port Training Institute (KPTI), Busan in early 2014. Delivered by ARI Simulation, the virtual crane simulator is equipped with a motion platform based on six degrees of freedom and is capable of operating multi crane models including quay crane, rubber tyred gantry & rail mounted gantry.
This full mission crane simulator is installed with five visual channels, fully enclosed replica cabin and a motion platform. It simulates a real crane cabin with controls accessible on either side of the operator’s chair, an out of cabin view and a microphone for communication. The installation also includes four sets of desktop based configurations, each with two visual channels.
The simulator was customized to include the virtual world of the Busan Port, quad lift operation and tandem lift operation of the QC crane to give a 360-degree learning experience to the crane operators. Another special feature includes head movement tracking via Kinect sensor which rotates the visual of the simulation in the direction of the movement of the operator’s head. The visual system is completely integrated with the simulation scenario, motion, sound system and crane controls and thus provides the necessary depth in the visual perspective. 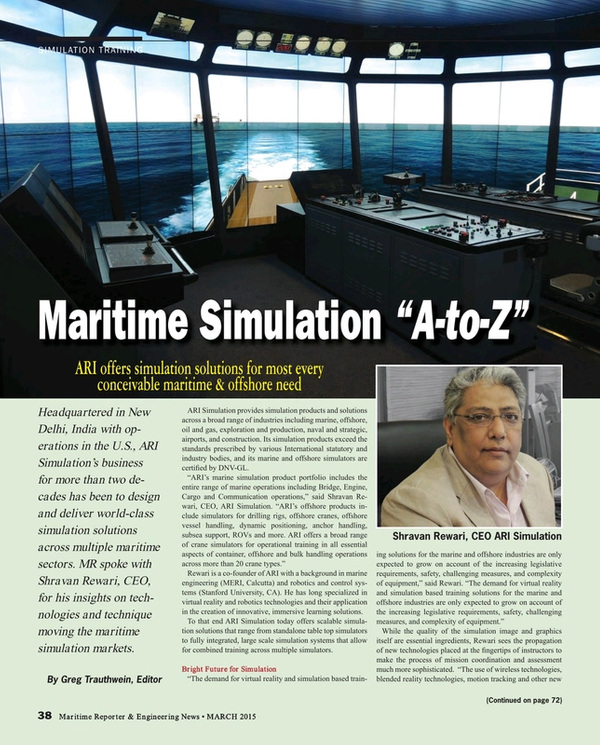