2007: A Tough Time to Raise Money
The world was on the precipice of economic meltdown on the eve of Brengle taking the helm at the Coast Guard Foundation, perhaps not the ideal environment to raise money. Yet the foundation, like the group it serves, acted quickly and surely to shore up its footing and future.
“We made a strategic decision at that point to expand its pool of donors,” said Brengle, noting that at the time the entire donor pool database included about 2,500 names.
Fast forward eight years and it appears the strategy has paid off.
The foundation normally raises between $5 to $7 million per year, but more recently it has been at the $8m level and the new goal is $10m.
In tandem the number of donors has grown exponentially, with about 10,000 active donors each year, and more than 20,000 names in the donor database.
Part of this strategy was a twist on the saying “Think Global, Act Local,” as today the CGF has a national profile, but it also has three regional directors of philanthropy (with the aim to add more). “A lot of donors, particularly individual donors, are interested to support the Coast Guard in their own communities … the regional approach is working,” said Brengle.

Helping the Helpers
“The Coast Guard Foundation supports the men and women of the Coast Guard and their families in ways that really help their quality of life and ability to serve the nation,” said Brengle. “We are very connected to Coast Guard headquarters, and we work closely with the Coast Guard about what is needed beyond appropriated dollars to help with education expenses, to make serving on duty in remote locations more palatable and to make serving in the Coast Guard more of a community experience.”
In tangible terms, the Coast Guard Foundation tackles projects large and small, and it assists Coast Guard men and women and their families with something as simple as sporting equipment to building a gym; to providing college educations to the children of Coast Guard personnel who have lost their life in duty, to supporting Coast Guard members in their own quest for higher learning.
Participation in the Coast Guard foundation can be as simple as making a donation, to a more hands-on role in volunteering for one of the many CGF events held annually.
“We’ve even had people ‘adopt’ Coast Guard stations, throwing parties and annual cook outs to help raise money and awareness,” said Brengle. 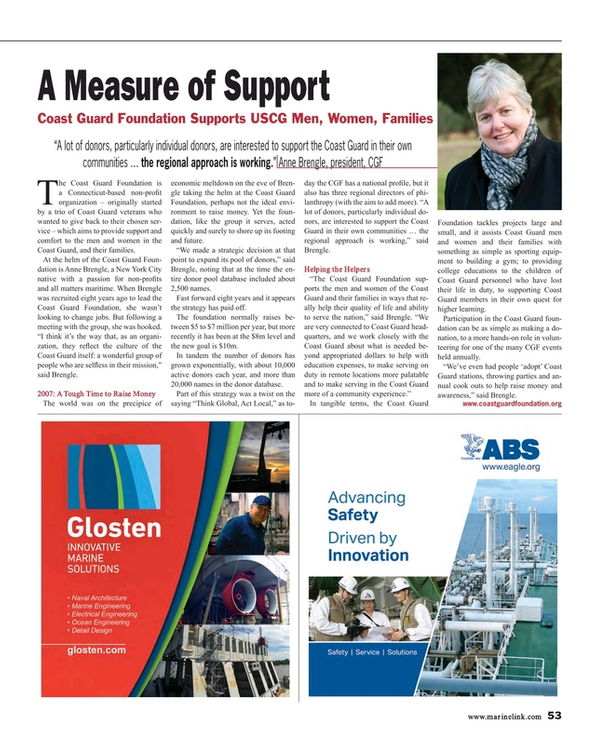