Resilience is defined generally as the ability to recover quickly from setbacks.  Setbacks are inevitable.  Individuals and entities are best judged by their resilience – their ability to get back on track after experiencing a reversal.

The best way to recover from a setback is to anticipate the setback in advance and plan a recovery strategy.  At the most basic level, this is something we do all the time.  We keep spare batteries in the house so that when the flashlight or television controller dies, we can quickly bring it back into operation.  We keep at least a minimum amount of fuel in our vehicles so that we are less likely to be stranded.  Businesses and other systems are more complex, but the same principle applies.

The maritime community faces a multitude of risks.

Most successful maritime businesses have, at least to some extent, planned how they might recover from or mitigate particular setbacks, ranging from higher costs to fire.  Some planning is imposed from outside.  Insurance companies often require insured’s to develop plans for mitigating losses.  Classification societies impose certain requirements.  Government agencies, including but not limited to the International Maritime Organization (IMO), the US Coast Guard, and the Environmental Protection Agency (EPA), require a variety of contingency planning by regulated entities.  These latter planning requirements address issues such as communications, navigation, pollution prevention and response, and security.

In 2011, President Obama issued a Presidential Policy Directive aimed at strengthening the security and resilience of the United States through systematic preparation for the threats that pose the greatest risk to the security of the nation.  The directive notes that preparedness is the shared responsibility of all levels of government, the private and nonprofit sectors, and individuals.  National Preparedness Guidelines were issued on 7 August 2012 identifying critical elements and initiating development of a National Preparedness System.

Rather than approaching risks, such as the danger of oil spills, individually and separately, the National Preparedness System envisions an “all-hazard” approach, where  all threats and hazards of concern are identified and given context.  The capabilities considered necessary to address the threats and hazards are established, along with the resource requirements appropriate to provide the needed capabilities.

The U.S. Coast Guard has been a leader in contingency planning, both with regard to its internal planning and with regard to guidance for the maritime community generally.  It has for years encouraged float plans for the recreational boating community and voyage planning for the commercial sector.  Oil spill response planning was initially encouraged and then mandated for tank vessels, non-tank vessels, and for facilities.  Vessel response plan requirements were recently expanded to include salvage and marine firefighting.  Hazardous substance spill response plans are also encouraged, as well as plans to address hurricanes and heavy weather events.
Recently, the Coast Guard has strongly encouraged development of cyber security plans by the maritime sector.  Cyber threats are growing and have potential to inflict significant harm on individual entities, the economy, and the environment.

All-hazard contingency planning in the maritime sector has not received much attention or emphasis to date, but that is about to change.

In 2011, Canada and the United States reached agreement on an initiative to enhance perimeter security and economic competitiveness.  Maritime commerce was recognized as an area deserving of increased attention for both economic prosperity and security reasons.  From that recognition, a Maritime Commerce Resilience (MCR) bi-national program developed.  Governmental and private sector partnerships have been established in the Pacific Northwest and in the Great Lakes to formulate comprehensive all-hazard approaches to maintaining resilience in the regional maritime sectors.  Plans call for developing joint strategies, processes, and plans to facilitate the sharing of information and resources during emergencies, the dissemination of best practices, and development of clear lines of communication.  This initiative is now expanding to New England and the Canadian Maritime Provinces.

The concepts, though, of Maritime Commerce Resilience and all-hazard planning are expanding far beyond the Canada-US border region.  While a long way from being mandated (if ever), all-hazard planning is an idea that deserves greater attention within the maritime community.

The term “all-hazard planning” is not to be taken literally.  It would be impossible to plan for every conceivable hazard.  But it is possible, and prudent, to plan for all reasonably likely hazards.  In the maritime sector, this would include, among other things, planning for response to and mitigation of spills, collisions, groundings, fire, significant equipment failures, heavy weather, electronic connectivity issues, supply chain disruptions, etc. Ideally, the planning should be expanded beyond individual entities to address port-wide and region-wide issues.  For example, an all-hazard plan for the Port of Jacksonville would address major issues such as the port being impacted by a hurricane, the collapse of a major bridge, or the wide-spread loss of electrical power.  An all-hazard plan for San Francisco Bay might not address hurricanes, but would certainly address earthquakes.

Basically, an all-hazard plan for a port or region would identify potential threats; prioritize critical infrastructure and services; prioritize assets, products, and services with a high consequence of loss to the economy or environment of the region; identify resilience gaps; and plan for the filling of those gaps.  With a comprehensive and thoughtful all-hazard plan for a maritime entity or for a port or region, resilience and recovery from a setback will be improved, even if the setback which occurs is not the exact one for which the contingency plan was developed. 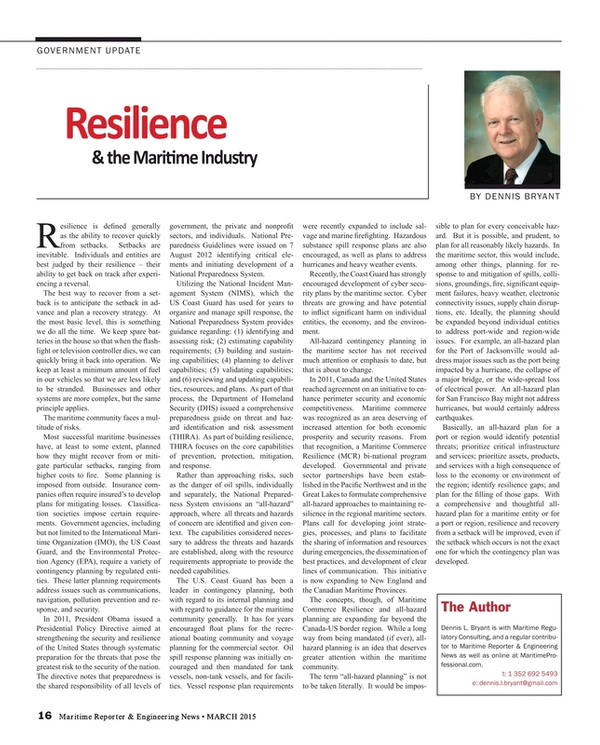