Over the last decade or so there have been rapid advancements in the area of maritime smart software and autonomy solutions, with developments ranging from advanced 3D graphical interfaces, operator-in-the-loop assistance all the way to un-assisted autonomous adaptive operations. Adaptive is to say that the vehicles are being equipped with the capabilities to re-plan and change their missions and behavior in response to feedback from the data they have gathered. A major focus for these developments has been on software solutions to enhance the capabilities of UUVs (Unmanned Underwater Vehicles) where, because of the low-bandwidth acoustic communication, approaches used in other domains are not applicable. For example, UUV missions are typically going to transmit 30 bytes every few minutes, in contrast to an aerial drone that may have multiple HD video streams.

Smart Software Moving Towards Full Autonomy
The concept of autonomy and smart software can cover a wide range of levels of autonomy. To start with, this advanced software processing can be as straight-forward as improving the visualization of the incoming data. This might mean, for example, using 3D graphics techniques to help an operator process large volumes of data.

The next step up in complexity, traditionally referred to as decision support, relies on the smart software to reduce the amount / complexity of data that the human operator has to view. The traditional example would be setting an alarm on temperature readings but modern software can process more complex data and identify subtler trends.

Moving up again in sophistication, the software processing can be used to achieve “operator-in-the-loop” autonomy. This might be adaptive control of the vehicle while the operator monitors progress and intervenes where necessary.

The final stage of smart software processing is for full autonomy without the operator directly involved. In this case, vehicles are capable of carrying out full missions independently of operator input, even going so far as to adapt their behavior in response to the external environment. The main advantage to full autonomy is in situations where the vehicle has to operate for extended periods in a remote, hard-to-access or dangerous location.

SeeByte Neptune
SeeByte developed a suite of software tools to provide enhanced command and control capabilities for off-board assets. Neptune provides a payload control architecture and real time autonomy engine for unmanned systems to plan and execute well known patterns of behavior that expedite and optimize single vehicle and multi-vehicle operations. There is a clear distinction between goal-based mission planning and straightforward pre-planned missions; goal-based mission planning places an emphasis on the outcome of the mission with the capability for the vehicles to autonomously re-plan the mission to best achieve the intended outcome. In essence, this allows the operator to focus on what the mission outcomes are, rather than how they will be achieved.

All data processing is carried out by functions and any third-party can develop their own version for integration. This would include target recognition algorithms or seafloor swath bathymetry following algorithms. Neptune has had demonstrated on a number of occasions integration of third-party functions that extend the core capability.

Similarly all vehicle planning is performed by behaviors and third-party integrations are also possible. These could include new area survey approaches or ocean sampling patterns for oceanography. Various customers have used Neptune with third-party behaviors to provide specific capability not provided by the core product.

Benefits of Full Autonomy
The combination of PCA (abstraction layer), autonomy engine and modular software approach can provide a generic platform that consolidates all sensor, vehicle and mission data into one system. A major advantage of this is that multiple vehicles of different types can be integrated together in to the same collaborative network, effectively allowing operators to manage an entire fleet of vehicles from a single common tool.

For example, recent operations have shown that on average the autonomy-enabled mission with two UUVs can perform the specified mission in half the time normally required to carry out the same work using conventional UUV tools with two UUVs.

Autonomous capabilities can also enable the force multiplier effect where previously fleets of vehicles would be limited by labor intensive operating processes. Breaking this link between the number of vehicles and the number of operators is vital in achieving the expected benefits of operating a fleet of unmanned vehicles.

These include integration of SeeByte’s Neptune software with SeaRobotics’ family of general purpose Unmanned Surface Vehicles (USV) as part of a Defence Research and Development Canada (DRDC) contract. This integration enabled the USV to act as a relay to an Unmanned Underwater Vehicle (UUV) squad. This is an important step needed in order to enable over-the-horizon UUV operations.

The UK Royal Navy Maritime Autonomous Systems Trials Team (MASTT) also attended Pax River with their recently delivered autonomy demonstration system for MCM. This is a high level autonomous demo involving inputs from multiple nations and demonstrating SeeByte’s Neptune software which is the core open autonomy architecture for the UK’s Maritime Autonomy Framework, and third party, autonomous behaviours in multiple environments. Effectively, the autonomy system enables communications between international vehicles – in this case a Canadian UUV, three UK UUVs of different types and a British USV. Neptune allows end-users to develop their own autonomy behaviors, a crucial feature to allow navies to develop their own unique fleets but be able to collaborate with other nations as fleets will commonly run on Neptune. In the case of MCM, unmanned vehicles act as a layer between any danger areas and the crew. While the vehicles are able to directly survey an area and gather large quantities of data, the crew is then able to review any points of interest highlighted by the software and take appropriate measures to neutralise the threat. The systems were integrated with the UK’s Maritime Autonomy Framework (MAF), developed under Dstl funding, which extends autonomy architecture to enable further advanced capabilities.

Mini Case Study: Stokes Bay
SeeByte, ASV and the Marine Biological Association of the United Kingdom were awarded funding under Phase 1 of the Adaptive Autonomous Ocean Sampling Network (AAOSN) SBRI. The aim of the project was to reduce the complexity and frequency of operator input when supervising large fleets of autonomous systems from the shore. Phase 1 focused on Tagged Fish Tracking and culminated in a demonstration of the autonomy behavior. The core scientific question being addressed is whether the recently introduced or updated fish management zones (MCZs, SACs, and SCIs) will have a detectable effect on important fish species.

Following the successful completion of the first phase trial, SeeByte, ASV and the Marine Biological Association of the United Kingdom have now been awarded $900k of funding to carry out Phase 2. This will run until April 2016 with the trials conducted on UK National autonomous assets managed by NOC (National Oceanographic Center, U.K.) , including a long endurance autonomous surface vehicle, using a common interface and control system. The phase 2 trials will include integration of a multi-beam echo sounder, for dynamic seabed mapping.

Conclusion
The maritime sector has been at the forefront of the development of smart software solutions for unmanned vehicles. The aim of full autonomy, provided by tools like Neptune, is to allow multiple tasks to be run in parallel with the available vehicles automatically taking responsibility for tasks. The benefits of full autonomy are simpler planning, reduced error rates and improved reaction to environmental conditions. Nowhere has this been more clearly demonstrated than in recent developments in MCM UUVs. However, these proven advantages are now starting to transfer to other commercial sectors and particularly to oceanography. It would seem that the capabilities of UUVs are only as sophisticated as the software behind them. 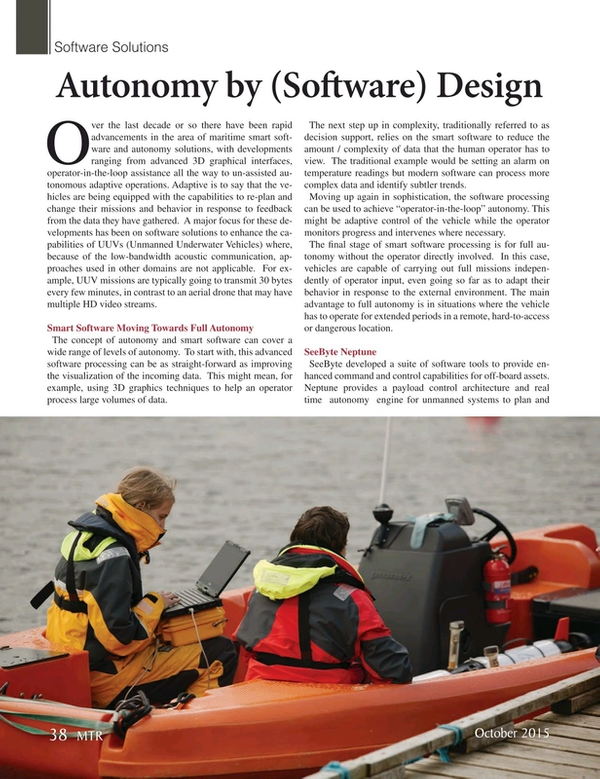