Next month in San Diego The Maritime Alliance will convene its seventh Blue Tech & Blue Economy Summit, an event which brings together a small group of highly influential executives and government officials for two days of discussion and social function. The meeting in San Diego is envisioned as a platform to give the subsea industry voice, a loudspeaker to convey the promise and opportunity within the sector. With that we spoke with Frederic Terral, CEO & President of Brand Architecture Inc., which last year created for The Maritime Alliance and this year created for U.S. IOOS stunning campaigns to help raise the profile – the Voice – of this wonderous yet somewhat mysterious subsea industry.

For our readers not familiar, please describe the business of Brand Architecture.
Brand Architecture Inc. (BA) is an award-winning branding and design agency that was established in 1999. Our team members are located in Orlando, Boulder and Austin. We are known for our design of the Coca-Cola sign in New York City, Times Square and for our rebranding of Outback Steakhouse. We also work with startups and small businesses. Most recently, we were honored with the task to rebrand the U.S. IOOS, NOAA Program Office. We love a design challenge and our passion to develop smart, creative solutions transcends industry and popular trends.


To date, looking at projects outside of the maritime realm – which project – are you most proud and why?
There are many projects we are proud of but the Coke sign in New York is certainly up there. We had never designed a sign before and we were competing against a dozen well known and much larger firms than ours, with more relevant experience than our company. Our eclectic, multidisciplinary team of designers, writers and illustrators worked seamlessly together to identify the simplest and most effective way to communicate the Coca-Cola brand essence. The final solution elegantly features Coca-Cola’s Dynamic Ribbon Device as seen on millions of cans and bottles around the world. Ten years later our sign still glows brightly on Times Square, and it’s still relevant today as it was the day the lights were turned on.


Last year we met at the Maritime Alliance’s Blue Tech & Blue Economy Summit in San Diego. Your team had created some stunning material for Maritime Alliance. Can you tell us the back-story on how your firm and the Maritime Alliance came together?
My partner and BA founder, Wright Massey, introduced me to Michael Jones about three years ago. Michael was exploring the possibility of creating a poster series from the Maritime Alliance to promote STEM careers in the Ocean Technology Industry to students considering their future career paths. Michael asked me if my team and I would be interested in working on such a project. My answer was an emphatic, “Yes!”

The design team had a great time learning about the industry and it opened our eyes to technologies and efforts we were unfamiliar with. The posters are a result of our team’s deep dive into a strange new world. Being industry “outsiders” gave us the opportunity to present a new perspective to promote Ocean STEM to students and the freedom to not rely on past practices and standards. Michael opened our eyes to the ocean and we are pleased to know that the posters are now doing the same for others.


As you delved into the maritime world, what facets did you find most interesting or inspiring as you put together the pieces that we saw last year?
We noticed that a common practice in the maritime industry was a push strategy showcasing charts, numbers and an overuse of messaging that would get lost with viewers. When we were strategizing ideas for the Maritime Alliance project, Michael Jones sent us books and links to images from the ocean’s depths that completely astonished us. Upon first glance of the images, we were inspired. The ocean is such a mysterious place and we wanted to translate that with simple imagery to lure viewers in, as we were lured into the photos. There is so much we don’t know about our ocean and it was our mission to create a series of posters to ignite the curiosity of the future STEM stars of tomorrow.


Measurable results are the hallmark of any ad campaign. Perhaps this is a question better suited for Michael Jones, but can you discuss the measurable results that your campaign helped to generate for the Maritime Alliance.
I would defer to Michael for this question. I can tell you that I’ve seen the posters at the NOAA offices in Silver Spring, MD and whenever I meet someone who has seen the posters, they go out of their way to compliment them.


I have often written and said that the only time anyone hears about the maritime industry in mainstream media is when there is an accident or a tragedy. Maritime and subsea matters are often subliminal, even to communities directly connected on the coast. In helping to raise awareness, to gain a foothold in the general population … to Give “voice” to the Blue Economy and the Blue Tech Clusters around the world … what are the most important aspects to consider, from your perspective.
You said it in your question. I believe that the mainstream has become desensitized to ocean/marine accidents or tragedies. Unless there is a direct, personal impact, it’s just another “problem” for someone else to “fix” or attend to. There needs to be one voice to first and foremost deliver a singular message for ocean awareness. This voice needs to pull and not push citizens in and once we have their attention, we can introduce them to the benefits of the Blue Economy and Blue Tech Clusters that impact their lives in ways they are not directly aware of. We need to stop yelling and scaring citizens.

It’s like parenting, the more you shout, the more you are ignored. We need to tell a different story to capture their attention, one that needs to be unexpected, unconventional, surprising and alluring. We need to recruit non-maritime, high-profile and influential mainstream partners to lead the efforts to deploy non-traditional strategies that pull in the general population, on terms and strategies they are comfortable with. It’s not an easy task, but until bigger outsider voices join in the conversation, we’ll be stuck relying on mainstream media to alarm us for a ratings bump.


Does your work continue today with the Maritime Alliance? If so, please provide details.
We have no current projects with TMA but we enjoy an on-going relationship of collaboration, support and mutual admiration.


Each client, each industry, adds a small chip to your collective memory and experience bank, and I would assume that this influences future work as well. Without getting to philosophical, can you explain how your work in the maritime sector has influenced your greater body of work?
Working in the maritime sector has not so much influenced our body of work as it has influenced us as individuals. I for one have gained a growing passion for the ocean and those who work to monitor and protect it. I have altered my purchasing habits. I have encouraged my staff to be more sensitive to our waste and standard workplace habits. I have sought out more work in the maritime space to contribute our expertise to help in any way we can. It has been a sort of awakening that cannot be undone. I look forward to more projects in the maritime sector and I hope to someday use our talents to make a difference in the overall awareness of the ocean, Blue Tech, Blue Economy and all those who work diligently to make a difference. 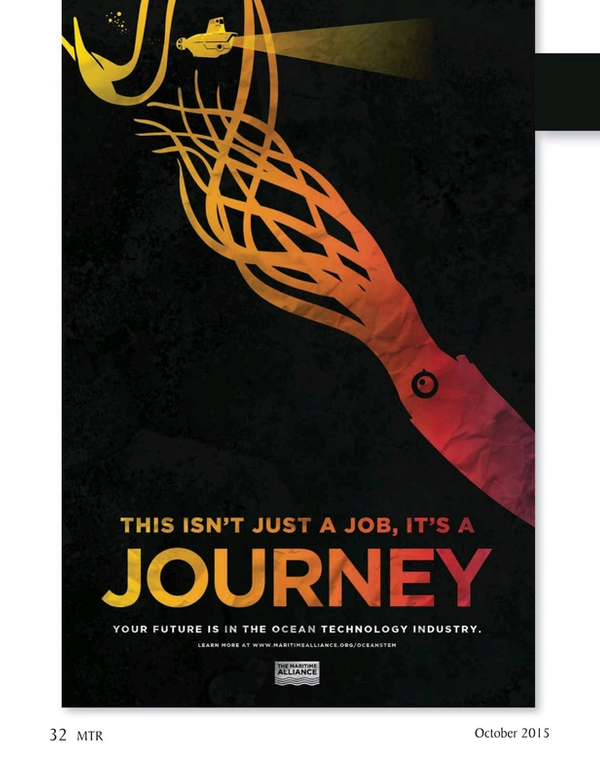