The nation’s newest oceanographic research vessel, the R/V Neil Armstrong (AGOR 27), has completed acceptance trials, and the U.S. Navy turned the ship over to Woods Hole Oceanographic Institution (WHOI) on Sept. 23, which will operate the vessel as part of the U.S. Academic Research Fleet (ARF).

“The U.S. Navy is proud to support the national research fleet by delivering state-of-the-art research vessels like the R/V Neil Armstrong,” said Chief of Naval Research Rear Adm. Mat Winter about the event. “The Navy’s innovative scientific mission will directly benefit from the fielding of this next-generation research ship focused on maritime technology discoveries and break-through capabilities.”

Sister ship R/V Sally Ride (AGOR 28) will join the fleet next year and will be assigned to Scripps Institution of Oceanography.

The new ships will replace R/V Knorr (AGOR 15) and R/V Melville (AGOR 14) as part of the Navy’s portion of the ARF. Both ships have reached their expected service life, but they are still capable science platforms.

“These two vessels are destined for additional oceanographic service, as they will be transferred to the navies of Mexico and the Philippines respectively,” says Schnoor.

According to Schnoor, the new deep-ocean, general-purpose research vessel will study ocean chemistry and geology, underwater acoustics, marine biology and ecosystem management, and marine technology development. “There is still much to be learned about our oceans and the Neil Armstrong will certainly be a part of many future discoveries.”

With its crew of 20, the 238-foot vessel can conduct science expeditions up to 40 days for as many as 24 scientists and research staff.

According to Schnoor, oceanographic research vessels within the U.S. ARF are owned by federal agencies (the Navy and the National Science Foundation) and state institutions, such as universities. Vessels are leased to competitively selected, oceanographic research institutions via charter party agreements or cooperative agreements for a period of five years, and are generally renewable with the same institution for the service life of the vessel. The vessels are operated and maintained by licensed mariners hired as university employees. Operations and maintenance costs are sponsored by federal agencies who sponsor the scientific research carried out on the vessel. Depending on vessel size and capability, and the scientific objectives, vessels generally complete from 10 to 25 separate cruises annually lasting from a few days up to two months.

Cruises take place the world over, in every ocean, major body of water, the Great Lakes, in U.S. and foreign exclusive economic zones (EEZs), says Schnoor. “Teams of scientists accompany the research vessel and crew on planned science cruises. The teams are headed by a chief scientist, and can include from a few to as many as 35 other scientists from the same or different institutions. The chief scientist is responsible for planning the research objectives of the cruise, ensuring the data and samples are collected, and assisting the crew in the operation of the oceanographic mission equipment. In an effort to maximize the effectiveness of cruises, and to economize on cruise costs, vessel scheduling is coordinated by the University-National Oceanographic Laboratory System (UNOLS) with the UNOLS vessel operators as part the U.S. ARF. For cruises pursuing science objectives in foreign EEZs, vessel operators coordinate cruise schedules and science objectives with the US State Department, which coordinates these requirements with foreign ministries.”

“The assignment of Naval auxiliaries to academic institutions for oceanographic research purposes traces back to the post-WW II era when surplus Navy support vessels were donated to oceanographic institutions, and modified to support federally sponsored oceanographic research activities,” says Schnoor. “Navy research vessels have been purpose built to commercial standards since the 1960’s, and as with just about all Navy auxiliaries, they are not crewed by U.S. Navy personnel, but rather licensed, civil mariners.”

UNOLS
The University-National Oceanographic Laboratory System (UNOLS) is a non-profit consortium of U.S. oceanographic research institutions, formed in the early ’70s to assist in the effective and optimized scheduling and operation of the U.S. ARF. Membership includes both research vessel operating institutions and non-operator institutions.

A support staff and office are currently hosted at the University of Rhode Island Graduate School Of Oceanography, sponsored and funded by the National Science Foundation, the Office of Naval Research, and the National Oceanic and Atmospheric Administration (NOAA), the Bureau of Ocean Energy Management and the United States Geological Survey. UNOLS is governed by a chartered Council representing member institutions, and includes nine committees chartered to support the operations of research vessels and the scientific endeavors supported by the vessels. The committees support the following areas of vessel operations: cruise scheduling, vessel operations, vessel technical enhancements, fleet improvement. Vessel-based scientific disciplines in deep submergence, seismic oceanography, airborne oceanographic research, Arctic operations, and ocean-based observing systems are supported by individual committees, which meet twice annually and provide direction and planning for optimizing science operations and future improvements.

According to Jon Alberts, UNOLS executive secretary, the research community is looking forward to the new Neil Armstrong and Sally Ride. “The new ships will take advantage of advances in technology. They will have more efficient propulsion systems, have improved crew and science staff habitability, be more environmentally friendly and be quieter research platforms. The ships will have better navigation systems and state of the art dynamic positioning. Automated handling systems will streamline launch and recovery of scientific instrumentation, requiring fewer people and conducting those evolutions more safely.”

UNOLS is working with NSF to plan and develop the next regional class research vessel to replace the existing coastal class of vessels.

ONR, NSF and NOAA will sponsor the next meeting of the International Research Ship Operators (IRSO) in October, to be hosted by Scripps Institution of Oceanography in La Jolla, Calif. UNOLS will coordinate the agenda and logistics of this annual gathering. The IRSO meeting brings together operators from around the world to share lessons learned, discuss common problems and solutions, and learn about new ship builds. “We’re making a concerted effort to coordinate research vessel schedules across nations to maximize utilization and help each other whenever we can,” Alberts says. “We’re also facilitating barters where nations can use ships that may already be conducting missions in their geographic areas of interest, thereby reducing transits to the far corners of the globe.

Chief Scientist Cruises
Alberts says UNOLS institutions is conducting Chief Scientist two training workshops and cruises this year, sponsored by both the National Science Foundation and ONR, to provide early career scientists, post-doctoral candidates and graduate ocean science students an opportunity to prepare themselves as the next generation of chief scientists. “They spend a few days alongside the pier in a workshop setting to learn how to plan shipboard field work, how to request ship time, and the mechanics of leading a research cruise. They then they go out for a week or so to go through steps executing a planned science mission underway.”

The next program will take place in Lewes, Delaware, home port of the University of Delaware’s RV Hugh Sharp, and will include a five day cruise on the Hugh Sharp to locations along the eastern seaboard as well as Delaware Bay and Chesapeake Bay.

The focus of the November program at UDEL will be a UNOLS Robotic Platforms Chief Scientist Training Cruise, will focus attention on integration of robotic platforms (i.e. ROV, AUV, UAV) into the training cruise. While there will be platforms provided, participants are encouraged to bring their own platforms and systems, providing an opportunity to operate their own instrumentation and collect preliminary data to potentially initiate their own novel research projects or programs.”

“This cruise and a pre-cruise information workshop will instruct early-career marine scientists—including senior PhD students, postdocs, and first or second year faculty members–on how to effectively plan for, acquire, and utilize time at sea for multi-disciplinary research and education,” he says.

Participants have found the training to be valuable.

Diane Adams, PhD, of the Institute of Earth, Ocean and Atmospheric Sciences at Rutgers University in New Jersey, says the chief scientist training cruise provided an opportunity to get a behind the scenes look at what it really takes to prepare and run a cruise. “Often, we get the hands on training on the at sea technical work, but there are important tricks for the management and personnel side that make a cruise a success.”

Amanda Nicole Netburn, a PhD candidate in biological oceanography at Scripps Institution of Oceanography at the University of California San Diego, says many students do not become actively involved in research cruises until it is time to start loading the ship, which it turns out is typically a year or more after the planning begins. “The UNOLS Chief Scientist Training program taught me that there is so much more to the process of planning and executing a successful expedition that will greatly benefit my own research programs into the future. Participating in the program was an enlightening opportunity to learn about the details of cruise planning all the way from making ship time requests in proposals to always walking off the ship with all data in hand.”

“There is no better way to learn about this process than working directly from UNOLS and NSF staff, the Marine Technicians, and experienced PIs. I believe my future research cruises will be far more efficient than they otherwise would be due to the knowledge with which I am now equipped through this training,” Netburn says. “On top of all that, I collected ancillary specimens of deep sea fishes for my research, met a group of bright and friendly young scientists, and got to spend a few more days of my life in my favorite place in the world- the sea!”

Arctic research
UNOLS has a standing Arctic Icebreaker Coordinating Committee that works closely with the Coast Guard and the polar science community. “The committee serves as a liaison between funding agencies and the Coast Guard to make the best use of the USCGC Healy as a research vessel, and to improve its science capabilities,” Alberts says.

The Coast Guard has two heavy Polar-class icebreakers that also have science capabilities, but has struggled to keep at least one of them operational. President Barrack Obama recently called for new icebreakers, but building new ships for the polar regions is costly.

“These heavy icebreakers will ensure that the United States can meet our national interests, protect and manage our natural resources, and strengthen our international, state, local, and tribal relationships,” the president said.

But the vessels will cost an estimated $1 billion each, and Congress has not approved the funding. 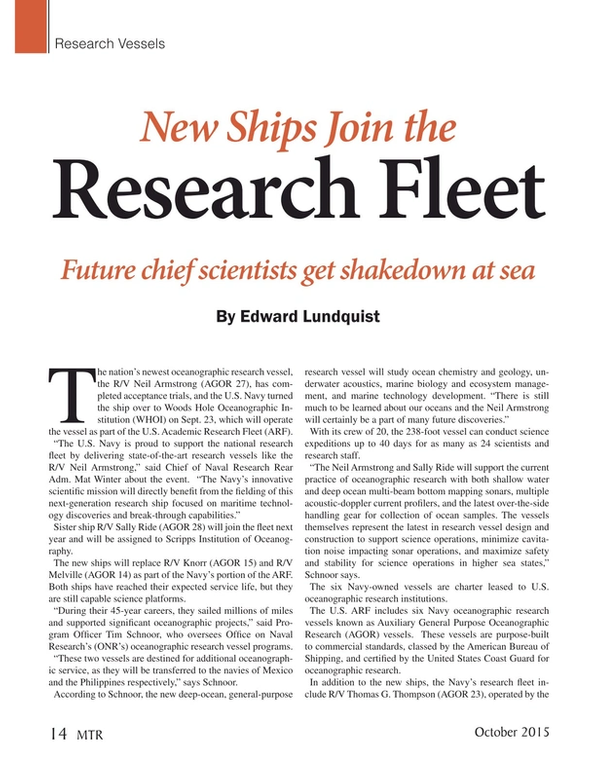