Project Mars: The future of Autonomy

Innovation and technological advancement is central to propelling maritime industries into a new era of efficiency. While the idea of autonomy is now a welcome solution for several military and scientific applications, other sectors are yet to fully take the concept on-board. As autonomous systems are continually proven a success in the field, the spotlight has now turned to the maritime sector. World-first ventures are emerging with aspirations of proving the potential of autonomy and its ability to transform the future of ocean voyages. A new collaboration between Plymouth University and MSubs, has set a course to build the first fully autonomous state-of-the-art ocean research vessel that will demonstrate the possibilities of autonomy within the shipping industry.

The potential of autonomous vehicle technology to address the challenges of working in conditions that are dangerous or inaccessible has been recognized in recent years. The concept of autonomy has already reached many areas within the maritime sector, such as oil and gas, and particularly the military. While the terrestrial sector pushes on with drone technology, where major companies such as Amazon are investigating the potential of using drones for home deliveries, the shipping industry has yet to embrace it.

“Some might see the lack of interest as conservatism on their part, and engrained adherence to having ‘eyes on’ the bridge at all times,” suggests Brett Phaneuf, Managing Director of MSubs. “But human error accounts for the majority of accidents at sea, so there needs to be a reassessment and a debate around this issue – autonomous technology should not be seen as some form of inherent threat to the safety of seafarers.”

Plymouth University and Plymouth-based partner MSubs are now aspiring to build the first full-sized autonomous unmanned ship to sail across the Atlantic in 2020 – replicating the ‘Plymouth to Plymouth’ Mayflower route. Designed and developed in collaboration with internationally acclaimed and award-winning partners, the Mayflower Autonomous Research vessel (MARS) has the potential to transform and influence the future of world shipping, and inspire a new generation of ocean explorers and researchers.

“The idea arose organically from discussions taking place between some of our academics and Brett Phaneuf of MSubs,” explains Professor Kevin Jones, Dean of the Faculty of Science and Engineering, Plymouth University. “Plymouth University has a number of academics who conduct research into the capability and usage of underwater autonomous vehicles (UAVs), and we have a great working relationship with MSubs, a company that has a great track record of winning international contracts, particularly in defense. At that point, the conversation was a conceptual one around technology and its adoption in the industry.”

The concept was pushed forward by the Mayflower 400 anniversary in 2020, which the city of Plymouth will be celebrating with a huge range of events and initiatives.

“This historic symbolism of a ship crossing the Atlantic was greatly apparent to us, and we began to ask ourselves, what if we could mark that occasion with something transformative; something that referenced that landmark sailing but pushed forward the boundaries of marine technology?” said Jones. “Rather than looking back 400 years, we could look forward to the next 400. So now we have this focus on September 2020, we will need to move quickly to ensure all of the funding, development and testing is completed.”

THE DESIGN
MSubs will be leading on the construction, using its expertise in building autonomous marine vessels for a variety of global customers. The contemporary vessel, designed by the multi award-winning Shuttleworth Design, will operate as a research platform, conducting numerous scientific experiments during the course of its voyage. MARS will also be used as a test bed for new navigation software and alternative forms of power, incorporating huge advancements in solar, wave and sail technology.

Phaneuf explains, “One of the key aims has always been to ensure the Mayflower Autonomous Research vessel is powered from renewable sources, and that will include solar power and wind power. There are some significant advancements in both solar panel technology and storage of that energy taking place right now, so we would be looking to tap into that emerging technology. We’ll also be drawing upon the University’s expertise in oceanography and navigation.”

Committed to working with renewable energy sources, the design of the vessel will be developed with these limitations in mind. The solar cell area required for effective motoring is too large for efficient sailing and safety in large waves. To overcome this, the design will likely include a folding wing system to increase the solar cell area by 40 percent in calm conditions.
The configuration of the hull was designed to account for a low motoring speed and reduce wind. A trimaran was chosen because it provides the most efficient hull form for low speed vessels. Without the need for accommodation, the center hull has been kept low to the water and the wings and deck are separated and raised above on struts. This allows waves to break through the vessel and significantly reduces roll induced by wave impact. The outer hulls are designed to skim the water reducing resistance by 8 percent.

“Nothing of this size and complexity has ever been built for the civilian sector, and the questions we will be looking to answer are how do you generate and store enough power to ensure a vessel of this size can keep moving in all conditions? How do we manage the trade-off between the need for surface area to be devoted to solar panels and other instrumentation, perhaps connected to the research?” explains Phaneuf. “And from a technical standpoint of a different nature, how do we help start that debate over regulatory issues? We can put a rover on Mars and have it autonomously conduct research, but we can’t yet sail an unmanned vessel across the Atlantic Ocean.”

THE SCIENCE
MARS will conduct wide ranging meteorological, oceanographic and climate data gathering and research. The vessel is intended to house one or more modular payload bays, much like a Space Shuttle, which will allow for flexibility on what research can be conducted into the future.

“It’s too early to talk specifics, but in time we do envisage the vessel hosting a full suite of METOCEAN sensors to conduct basic but persistent oceanographic, meteorological and climatological research. We will have an ADCP and DVL so we can look at current, a CTD will be periodically deployed so we get the salinity/temperature/depth at regular intervals, including sea-surface temperature and then a range of atmospheric data,” suggests Professor Martin Attrill, Director of the Plymouth University Marine Institute. “There is the potential to include deep-water bathymetric equipment, as there is a clear need for more data on the deep ocean, particularly in the polar seas. We will also look to host and launch gliders because they will really help us to address those challenges of how you conduct research in those conditions deemed dirty, dangerous or dull. Scientific investigation will define the long-term plans for the vessel.”

In addition to scientist research, the team hopes the vessel will assist in conducting research on renewable energy and propulsion systems for marine vessels. This would include studies into the development of software for automated and autonomous operations for extended duration, advanced satellite communications and co-operative behavior.

Data harvesting issues is also an area the group would like to see improved as well as the possibility of implementing ‘goal oriented programming’ to create dynamic mission plans that better serves the scientific goals of a specific mission without significant human intervention through direct operation of the Mayflower Autonomous Research Ship.

PROPELLING FORWARD
“There are a number of financial, technological and regulatory hurdles that we will need to clear along the way. At this stage, it is an aspiration not a realization. But we will be inclusive, talking to authorities to achieve that buy-in we’ll need for regulatory change; welcoming partners whose expertise might help to deliver a particular aspect of the vessel,” said  Attrill. “We are adopting an aggressive rapid prototyping program that leverages the experience the participants have in design, manufacture and operation of marine systems. And we’ll work with leading technology companies in the defense and civilian marine sector to integrate commercial and existing bespoke technology solutions from other areas of R&D.”

The group are working towards readying a model in spring/summer of next year and launching that to the public. There will be a testing phase, with some of that taking place here in the Plymouth University Marine Building, using their cutting edge wave tanks.  Following the year-long testing phase, the planned Atlantic crossing in 2020 will mark the 400th anniversary of the original Mayflower sailings from Plymouth, England to Plymouth, Mass. “If we can deliver the Mayflower Autonomous Research vessel, and obtain the various permissions required to have it sail across the Atlantic, then we will have a lasting legacy for the shipping sector. We are hoping to play a vital role in the introduction, management, de-risking and technological advancement in use of unmanned and automated systems. While this may have a different morphology and commercial purpose, it will nonetheless need all of the same sensors, equipment and software and meet the same regulatory issues. Crossing the Atlantic is, we hope, the start,” said Jones. The multimillion pound project is part of the University’s ‘Shape the Future’ fundraising campaign, recently launched at the House of Lords. Initial funding has been provided by the University, MSubs, and the ProMare Foundation, and corporate and private sponsorship will be sought for ongoing support. 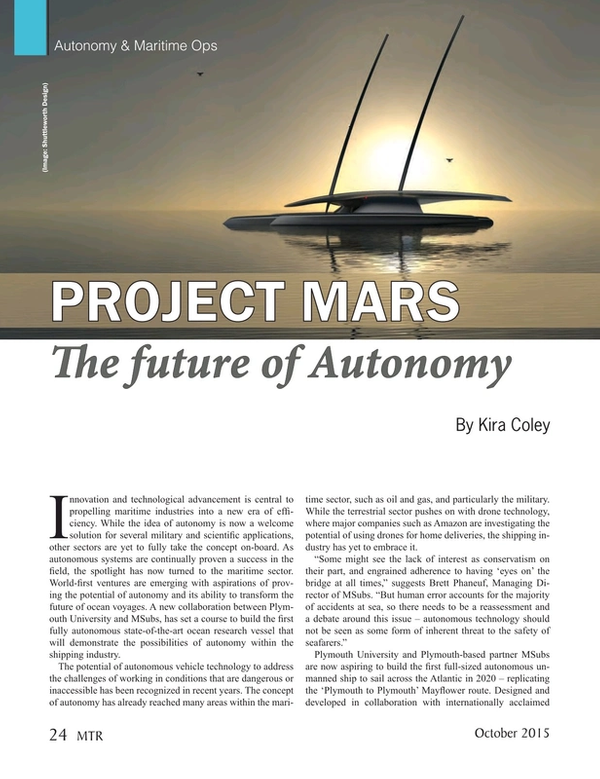