The new Voyager ROV system from VideoRay – which was scheduled to debut September 30, 2015 – aims to bridge the gap between economy and professional systems

As a member of the VideoRay’s economy series, the Voyager is designed to bridge the power gap between the economy and professional ROV lines, while retaining simplicity, portability and affordability, the manufacturer said. The Voyager is depth rated to 76m and designed for basic underwater visual operations in a low current environment. According to VideoRay, the Voyager features all the capabilities of its Explorer ROV, with the added power of enhanced horizontal and vertical thrusters which increase the submersible’s maximum speed to 2.9 knots. And like the Explorer, the Voyager provides a live video feed from a submerged robotic camera to a topside control panel.  Weighing 34kg, the portable and lightweight Voyager ROV system relies on a standard power source (100-240 VAC).  The Voyager ROV system includes the submersible, the control panel and 40m of professional performance tether. The Voyager also features a high resolution, 160° vertical tilt color camera, water depth readout, auto depth feature, compass heading readout and run time meter. The control panel has a 7-in. color LCD display and control knobs for the horizontal and vertical thrust, as well as the variable intensity halogen lights. 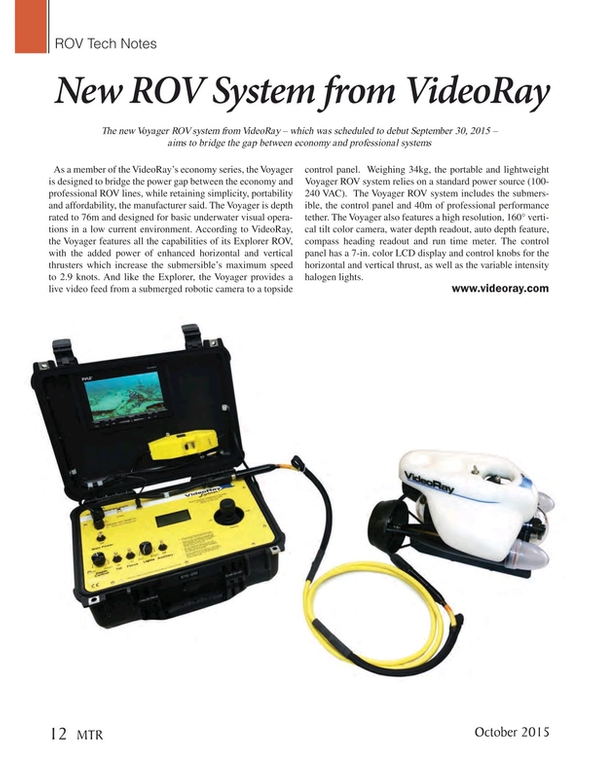